The difference between the Lotus engine and the Chevrolet is night and day and having a teammate like Tony Kanaan is a plus for the young lady.

St. Petersburg, Fla. – Simona de Silvestro has been racing in the IZOD IndyCar Series since 2010 and for the most part, she has been flying under the radar, except for occasional bursts of brilliance. A year ago she struggled while competing with Lotus power, but going into 2013, the stars seem to be lining up for her with the transition to the Chevrolet-powered KV Racing Technology team.

For the 24-year old driver, her progress is aided by having veteran driver Tony Kanaan as a teammate. The pair worked together during pre-season testing with Kanaan serving as her mentor. Until now, she never had a teammate. “Having a teammate is new to me, and it is work in progress,” she said.

Her race debut with KVRT and the No. 78 Nuclear Clean Air Entergy Areva entry started this weekend at the Honda Grand Prix of St. Petersburg, and she ran with the fast drivers in each practice session. When qualifications took place, she advanced through the segments, racing her way into the Firestone Fast Six and ending up with an impressive third-fastest time, just a tick of the clock behind pole winner Will Power and runner-up Takuma Sato.

Her performance impressed the veterans and IZOD IndyCar Series champion Ryan Hunter-Reay summed it up well when he said, “Simona is scary fast.” Added Power, “It was good to see new people up there, like Simona, and I always knew that she was quick.”

De Silvestro couldn’t stop smiling after her brilliant qualification run, and she bubbled over saying, “It’s unbelievable and it’s awesome. It is very cool to get the results we wanted. Thanks to KV Racing Technology for giving me the opportunity, and to the whole Nuclear Clean Air Energy campaign for supporting me after the year we had last year. It's cool to get the results. We were right there with Will (Power) and (Takuma) Sato, who are usually always up there, and it's fun to be up there with them."

Until Saturday, her best qualification effort had been a seventh at Edmonton in 2010. Her best start at St. Petersburg was 14th in 2010, which was the scene of her best finish, a successful fourth after a late-race battle with Kanaan for the coveted podium finish. 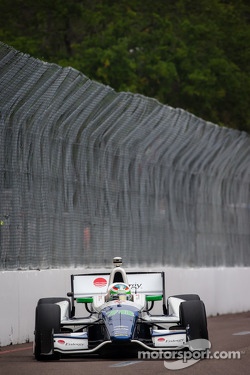 In the main event at St. Petersburg, de Silvestro did everything right, running with the leaders and staying in the top-five for most of the race. However, worn tires were her undoing at the end, and she lost three spots in the final laps, ending up sixth. But she was one of the crowd favorites with fans standing to cheer her every move.

Said the personable driver after the competition, “It’s been a good weekend for us. We kind of ran out of tires at the end, and I think we can be pretty happy with sixth. It was really cool to be up front all day with Will (Power) and (James) Hinchcliffe. It was awesome.”

Said co-owner Jimmy Vasser, “"Simona was awesome today. We knew she had it in her and that if we gave her the tools she needed she'd be competitive. It would have been great if she had been able to hang on and finish on the podium.”

Added Chevrolet's Jim Campbell, U. S. vice president, Performance Vehicles and Motorsports, “It was great to see Simona de Silvestro and the KV Racing Technology Chevrolet team run strong today. We are proud to have Simona with Team Chevy. She helped us introduce the Chevrolet Spark Electric Vehicle a few weeks ago at the Geneva Motor Show. And, now she is racing up front in the first IndyCar race of the season with Chevrolet power. It’s going to be an exciting season for her and the team.”

Racing has been part of de Silvestro’s life for a long time. Coming from Switzerland where racing is banned, she wasn’t deterred by the hurdles presented. She started out with karting and quickly advanced into a junior formula series before coming to the United States seven years ago. She joined the Atlantic Series and became the first female to earn the most wins, pole positions and laps led in a single season.

After finishing third in the Atlantic Championship in 2009, she transitioned to the IZOD IndyCar Series, finishing 19th in points and gaining a pair of top-10 finishes. And she took home rookie honors at the Indianapolis 500 and earned the Rising Star Award. A year later, she gained recognition for her run at St. Petersburg and had three top-10s overall. Last season was a downer with a season-best 13th to her credit and 24th in the standings.

De Silvestro has paid her dues and if this weekend can be used as a clue, she’s about to move forward in the standings and gain the recognition she has worked so hard to achieve.

Wilson had a solid start with a 9th place finish in St. Pete