Sonoma confirms 2018 finale will be IndyCar’s last race there 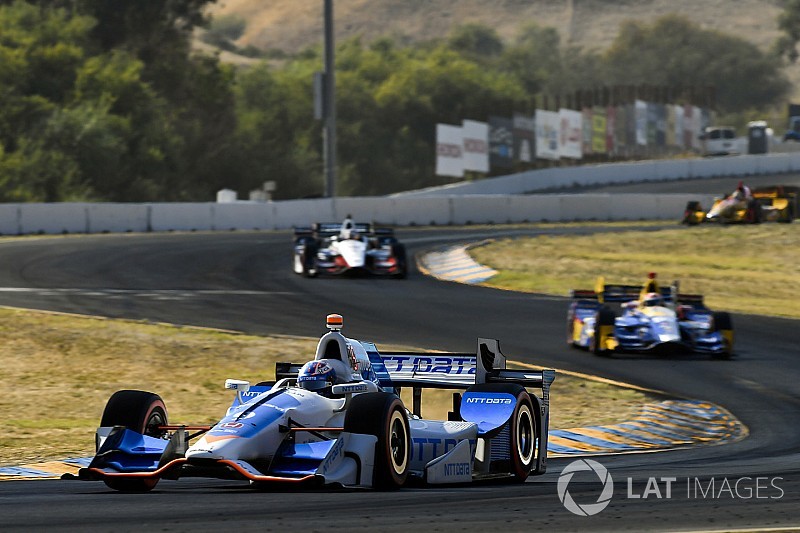 Following the news that IndyCar will return to Laguna Seca next year, Sonoma Raceway president Steve Page has confirmed that for financial and geographical reasons, he will not seek a new contract.

IndyCar’s new three-year deal with Laguna Seca was confirmed today when the Monterey County Board of Supervisors approved the plan, with the 2019 race weekend set for Sept. 20-22 and serving as the series finale.

Sonoma, which has a 14-year history with IndyCar, has hosted the series’ final round for the last three years and will do so again this September, but its contract ends this year and will not be up for renewal.

It had long been perceived by some that Laguna Seca would draw from the same potential spectator market – the tracks are 150 miles apart – and therefore the inclusion of one on the schedule would preclude the other.

It was thus not surprising when Sonoma Raceway’s director of communications last Friday issued a statement that read: “Below is a comment from Sonoma Raceway president and general manager Steve Page regarding IndyCar’s plans to explore an event at WeatherTech Raceway Laguna Seca, instead of [Motorsport.com’s italics] returning to Sonoma Raceway in 2019:

“Sonoma Raceway has invested heavily to build IndyCar’s brand and following in Northern California over the last 14 years, and we would be happy to continue that effort, but only under a sustainable business model. If the series determines their long-term interests are better served by moving the Sonoma race to another venue, that is a business decision they are obviously entitled to make, and we will turn our attention to other opportunities.”

Mark Miles, CEO of Hulman & Co., the company that owns IndyCar and Indianapolis Motor Speedway, disagreed with the “instead of” phrase in Sonoma Raceway’s statement, saying that it had never been a case of choosing one track over the other.

Miles told Motorsport.com: “We don’t generally think of our schedule in terms of ‘this race replaces that one.’ But it is fair to say that when the Phoenix deal ended we knew we had a gap available to gain another track without having to replace any of our others.

“We’ve been talking to Gill Campbell [Laguna Seca’s senior VP of events] ever since I got involved in IndyCar, about whether we could find any suitable opportunity on the calendar, and their agreement with the county means we could still have raced at Sonoma.

"We don’t subscribe to the theory that two events in the same general region doesn’t work, so we began these conversations with Laguna Seca not even knowing what the dates might be. And, to be fair, Steve at Sonoma never took the position that his track had to be the season finale; it’s that he didn’t want a race at another venue in a similar region.

Miles admitted, however, that Laguna Seca, whose title sponsorship switched from Mazda to WeatherTech on April 1 this year, had not been keen on plugging the gap between IndyCar’s first and second rounds, which this year and last was four weeks, and so therefore the two venues’ IndyCar races would have been placed in quite close proximity on the IndyCar schedule.

“We went into this looking for any date that works,” said Miles, “but yes, ideally we’d been focused on late March or early April. But climate-wise, Laguna Seca organizers felt that the weather on the Monterey peninsula in the early part of the season was not really an option.

"It can be foggy, it can be cold. So in response to their concern, that would have increased the likelihood of Laguna Seca and Sonoma being just a couple of months apart.”

That last point is moot, however, following Page’s confirmation to Motorsport.com that this year’s season finale will be IndyCar’s last race at Sonoma.

“We will definitely not be running IndyCar after this year,” said Page. “It’s a numbers issue. We have been losing money on IndyCar for a number of years and so we proposed terms to them on a renewal that they apparently could not accept.

"They were able to negotiate a deal with Laguna Seca that was at a substantially higher rate than we would be willing to agree to. Thus today’s announcement.

“The geographic issue, the relative proximity of the tracks, really got trumped by the economic issue, regardless of whether there were two races.

Asked if the IndyCar race at Sonoma ever turned a profit, despite the sparse crowds seen there in recent years, Page replied: “It’s always been challenging, but in the early years of our IndyCar relationship, we had a naming rights partnership with Infineon Technology and the income from that was allocated across our various events to help the bottom line for everything we did.

“Once that sponsorship went away… Well, there’s a Warren Buffet line – ‘Only when the tide goes out do you discover who's been swimming naked’.

"And since our tide went out, it’s been increasingly difficult to justify the IndyCar race economically, and we had increasing pressure from our mother-ship in Charlotte [Speedway Motorsports, Inc.] not to do things on which we lost money.

“There’s mixed emotions. There’s a certainly a sense among the staff who love IndyCar – which includes myself – that it’s disappointing we won’t continue, but equally we’re a for-profit business and so ultimately we have to do things that don’t lose money for the company.

"From a financial standpoint this was a business decision and the right decision.”

If there is substantial truth to the notion that there’s a significant overlap between the potential crowds at Sonoma and Laguna Seca, that would suggest that the legendary 2.238-mile course on the Monterey peninsula might also struggle to get fans through the gates, especially after the ‘novelty’ of IndyCar’s return has dissipated.

Miles responded: “There’s no science behind forecasting a result, but the management here who brought in the new CEO are well aligned now with the County and they think they can make it work.

"To me it’s about whether the management team can pull together the right sponsors and the right promotion of the event.

“I mean, OK, we’re talking about a different market but I remember people being unsure whether the Gateway race would work again, but we went back in 2017 and management made it work.

"We believe there is a fanbase here and it’s a matter of whether they can inform everybody and price properly and deliver the sort of experience that will keep these fans wanting to come back.”

Carlin: McLaren “too late” to enter IndyCar in 2019