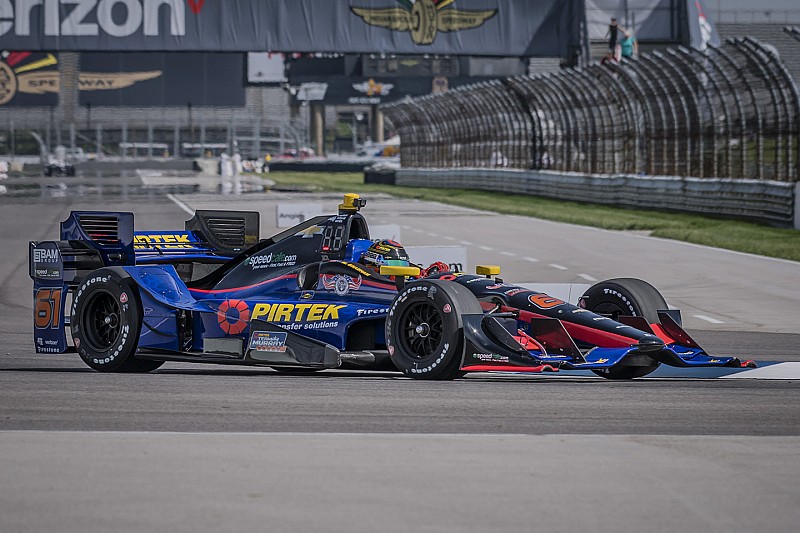 Pirtek Team Murray-KV Racing’s IndyCar novice says he is happy with his drive to 16th on the grid for his IndyCar debut, especially given a difficult build-up to qualifying.

Although unable to graduate from Q1, Brabham will join Team Penske ace Helio Castroneves on the eighth row of the grid tomorrow, and actually set a faster time than the Brazilian veteran.

Brabham told Motorsport.com: “We missed the first session because of a problem caused by a loose wheel, and in the second session we lost the brakes going into Turn 1 because of a brakeline issue.

“But when that was fixed, in the second half of that session, I was like, ‘Wow, the car feels really good’ but I just didn’t have enough laps under my belt to really start pushing hard.

“Having all those problems ironed out in the first day is a good thing though. So in the morning practice today we started to build that experience, and I got more comfortable.”

Among the scalps the novice claimed with his run to 16th were three Andretti Autosport drivers, and his old USF2000 teammate Spencer Pigot in the second Rahal Letterman Lanigan Racing machine.

“I’d say I was still improving by the time we hit qualifying,” said Brabham, “but finding the limit of the red [soft] tires for qualifying wasn’t like an ‘Oh my God, this will take me time to get to the limit.’ It was more like, ‘Great, these give me way more grip evenly across the whole car – doesn’t alter the balance at all.’ So I was happy to push.

“I’d say I was only just getting to the limit of the red tires though. There’s more to come from within me. And I know that because if you look at me compared with a Will Power or Simon Pagenaud, if I went out and did three laps, every single lap was quicker. Whereas you look at the guys fighting for pole, and they can go out and nail it with one lap.

“But getting used to an IndyCar and gaining that experience will help.”

Fueling issue may have prevented even greater performance

Brabham’s chances of graduating to the top 12 were stymied by a refueling issue that meant he simply ran out of time to complete a full second run.

He explained: “Our plan was to use two sets of reds to get through to the top 12. That would have been pretty awesome. But when we pitted after the first run, we couldn’t get fuel in the car, and so the team saw the clock was running down and realized there wasn’t time to get it working.

“So they just sent me out with the new tires but with only enough fuel for one more lap.”

Brabham admitted that yesterday’s car issues had probably made him a little more conservative in terms of banking laps rather than taking the car to the ragged edge. He believes that had he felt more at liberty to let loose in practice he might have been quicker in qualifying.

“I think I was a little bit too cautious yesterday once we had the braking issue resolved,” he mused, “but it’s all about building up confidence and not breaking parts off the car in order to find the limit. We cannot afford to.

Rahal and Newgarden sent to back of the grid