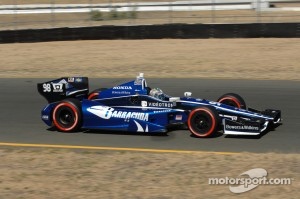 The team worked hard to make improvements during the Friday afternoon and Saturday morning practices. With each session, the Barracuda Racing crew gained positions and focused on their attempt to achieve their fifth consecutive Firestone Fast Six and be the only team in the Series to do so.

Coming up only a tenth of a second out of the fastest six cars, Tagliani was able to look at the P8 as an achievement and focus forward toward the race.

"First of all, I'm very proud of the Barracuda Racing crew," said Tagliani. "We were not here to test a week ago, so we were a little bit behind the eight ball with very limited track time to practice. So to get within barely a tenth of the Firestone Fast Six, I'm so proud of the boys.

"Right now, the car isn't where we'd like it to be on braking, so I'm struggling to enter at the speed I'd like - it's limited by how good it can brake - so I'm constantly locking the rear. But still, being a tenth out of the Fast Six isn't too bad. We would've liked to make it five in a row but we'll find that improvement in the car."