“They knew we were here,” says Foyt after Kanaan stars at Indy 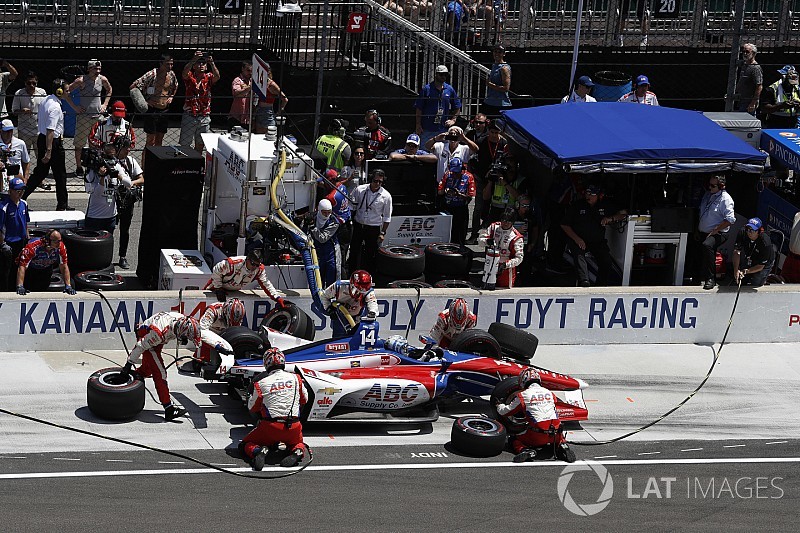 Tony Kanaan’s starring role, then misfortune, in last Sunday’s Indy 500 prompted A.J. Foyt to repeat the consolatory expression used by Mario Andretti after he retired while leading the 1987 Indy 500 – “They knew we were here.”

For the first time since 2001, a Foyt-owned car led the Indy 500 on sheer pace, Kanaan heading 19 laps, third only to Ed Carpenter and winner Will Power.

Kanaan, who started 10th, was up to sixth by Lap 2, and a fast stop saw him emerge from pitlane in second. After another round of stops, and still in P2, Kanaan drove past Carpenter for one lap, but on Lap 73 he retook the lead and retained it through to the next round of stops on Lap 90. Kanaan then picked up a right-rear puncture, however, and dropped to last, but he was coming through the pack when he spun exiting Turn 2 and struck the wall, 11 laps from home.

“We had a great day going and then we had a puncture that put us behind all day long, so I was playing catch up,” Kanaan said. “It was not for lack of trying, we came back from all the way from the back of the pack to inside of the top 10. Great restarts. So, it wasn’t our day.

“We have a great thing going, this team is very promising so we will leave here with our heads up. We had great pitstops, and I mean it wasn’t our day and to finish ninth or last for me it doesn’t matter. I’m not trying to make an excuse, I made a mistake trying, and that for me, in my book, is totally fine. I’m looking forward to the future in this team.”

Foyt told him, “You don’t have to apologize for that. I understand it when you’re trying to get to the front. If you didn’t get that flat [tire] you wouldn’t have been in that situation. It’s racing but you gave them a show. They knew we were here.”

Leist finished 13th, and declared: “I’m pretty happy with the performance – managed to complete the whole race and it was probably the most difficult race I’ve ever done. Pretty tricky and the car was changing a lot from one stint to the other so it was a long day. I’m happy for the team, I think we deserved it, and I’m looking forward to the next race now.”

Larry Foyt, Leist’s race strategist and team president, said: “Matheus did a really nice job for his first time here. He really was top rookie most of the day and got caught out on a restart towards the end there and Wickens got him.

“He really drove a smart race and learned a lot, I know. The crew did a great job in the pits and it looked like we had a solid top 10 but we’re just outside of it.

“Everything he learned today is going to pay him dividends. He’s showing he’s the real deal and I’m real excited what the future holds for him and the team.”