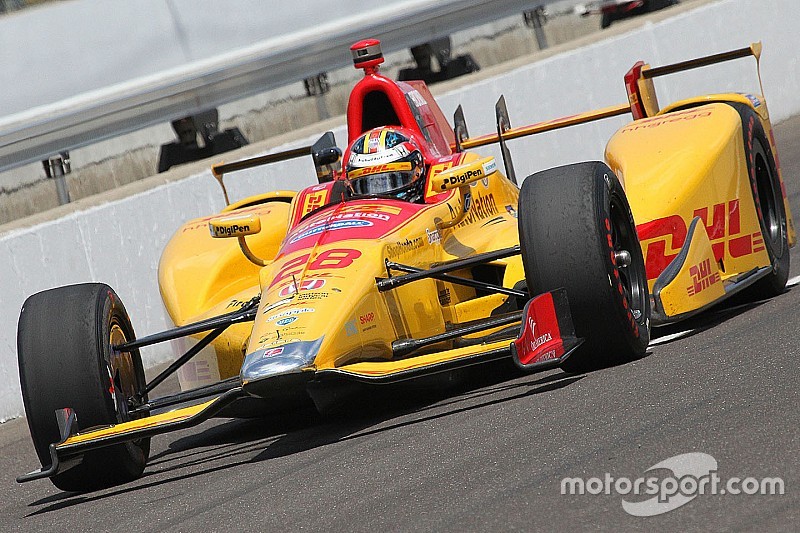 Dale Coyne Racing’s Gabby Chaves remained P1 after four of the six hours of Thursday practice for the Indy 500, but 2014 winner Ryan Hunter-Reay made it two apparent Honda blow-ups in as many days.

The #28 Andretti Autosport machine coasted to a smoky halt on pit-entry at 4:10pm ET, after completing 60 laps today. That brought out the eighth yellow flag of the day, six of which have been for track inspection/debris, the other being for a tow-in needed for the #2 Penske-Chevrolet of Juan Pablo Montoya.

Meanwhile Chaves’ top speed of 227.961mph at the end of the first hour has not come close to being beaten on an afternoon when even the draft does not appear to be boosting speeds. Three-time Indy 500 winner Helio Castroneves and current points leader Simon Pagenaud blasted around in each other’s slipstream, but lie 16th and 27th respectively.

There were two significant changes on the no-tow timecharts, however, with Chip Ganassi Racing-Chevy’s Max Chilton going fifth fastest, two places ahead of another climber, Graham Rahal’s Rahal Letterman Lanigan Racing-Honda. They remain 0.8 and 1.2mph off Will Power’s best, however, which remains 225.381.