Motorsport.com's countdown of the biggest stories in racing in 2019 continues with Penske Entertainment taking over ownership of Indianapolis Motor Speedway, IndyCar and IMS Productions.

Somehow, U.S. motorsport’s biggest secret for decades remained a secret to 99.99 percent of the racing community right up to the day of the announcement. On November 4, a new group, Penske Entertainment, was announced as the new owner of Indianapolis Motor Speedway, IndyCar, and IMS Productions.

Most responses among those who care passionately for open-wheel racing in this country combined relief and rejoicing – relief that the IMS and the series wouldn’t end up in the hands of a company that knew nothing about racing, and rejoicing that these great entities would be controlled by the most suitable person in the sport, Roger Penske.

As his longest-serving employee Rick Mears remarked to Motorsport.com a couple of weeks ago: “I’m so happy for Roger – and happy for the Speedway and the Series. I’m biased, but even if I take the bias out, there isn’t another person on this planet better for that position, because of his work ethic and talent in all areas, and because he will make decisions based on what’s best for the sport. He’ll put his heart into it. He’s always done that as a competitor: now he can do it as the owner.”

How did the deal come about? Well, the Speedway’s long-time steward was the late Mari Hulman George – daughter of Tony Hulman Jr., whose Hulman & Co. brand bought the Speedway in 1945, but who died in 1977. Ever since becoming chairperson of IMS and also Hulman & Co. in 1988, Mari had seemed immovable on the matter of the track’s future: it would remain in the family forever.

But Mari’s death in November 2018 meant that her children – Tony George Jr., Nancy, Josie and Kathi – became more open to the idea of relinquishing the family grasp on the self-proclaimed Racing Capital of the World. Thankfully, their respect for the Speedway, Indy car racing as a whole and the family legacy meant they were seeking not the highest bidder but the right bidder, and so Tony George approached Roger Penske on the Laguna Seca grid just before this year’s IndyCar season finale.

“I think we all realize that as a family and as an organization, we probably had taken it as far as we can,” said George during the announcement at the Speedway. “Roger, his structure, his resources, his capabilities that he demonstrates, is only going to take this to another level, and that's what we're all about. We’re supporting that continued elevating of this asset and staking a new claim on its future. We, with emotion, are happy to be here today.”

Although Penske pledged to devote his initial period of IMS/IndyCar ownership to analyzing and opinion-gathering, his purchase was not merely a prestige deal in which he becomes a dull caretaker owner, content with stasis. He will listen to advice from those within and without Penske Entertainment and then make changes.

For example, after listening to questions about the much-vaunted idea of an IndyCar/NASCAR double-header, and plans for IMS itself, Penske went on to say: “Look, we've got to break some glass on some of these things, don't we? We've got to try some of this.

"I'm prepared to take a risk – no risk, no reward in many cases… I think we have to look at investments in lights or something else we can do here to make the Speedway and IndyCar a going entity that gives us the results that we expect… Can we run a 24-hour race here? Can we run a Formula 1 race here? What are the things we can do?”

Indianapolis Motor Speedway of course serves as the nucleus for the U.S. open-wheel scene, but the truth is that the Indy 500’s inbuilt prestige and reputation means that 250,000 people would pour through the gates every Memorial Day Weekend for the next few years even if Penske did no more than what’s been done the last couple of decades. In the fullness of time, RP’s influence on the NTT IndyCar Series as a whole may prove even more profound.

Some 41 years ago, Dan Gurney wrote his famous White Paper that heralded the arrival of CART – Championship Auto Racing Teams – a consortium of like-minded team owners who would wrest control of topline U.S. open-wheel racing away from the United States Automobile Club.

One of Gurney’s primary motivations in leading this uprising was that he felt the Indy car season consisted of the Indianapolis 500 and a bunch of barely visible ‘other races’ for which purses were feeble and media coverage was negligible. Unfortunately, more than four decades on, some parallels can still be drawn, and teams urgently need that to change in order to attract sponsors. Penske has to send the marketing of the full IndyCar season into orbit, and as soon as possible, but that should be feasible given his character, prestige and reach.

Something he should be able to count on is support from his fellow team owners, because his integrity, too, is beyond reproach. Primary rivals such as Chip Ganassi, Michael Andretti and Bobby Rahal were swift to publicly applaud Penske’s purchase of IMS and IndyCar, offering no hint of worry over conflict of interest.

Two years ago, in the course of an interview before practice for the Indianapolis 500, Motorsport.com asked Roger Penske somewhat facetiously if he had any plans for retirement. His reply confirmed what most of us had always suspected.

“They’ll have to carry me out of here in a box,” he said with a little smile. “[Retirement] is not something I even think about.”

Which is why, at the age of 82, he had the motivation to seal the greatest deal of his life. Financially it may not be the biggest, but for a man steeped in Indy car and Indianapolis Motor Speedway history like Roger Searle Penske, this was the sweetest purchase imaginable. And IndyCar as a whole stands to benefit. 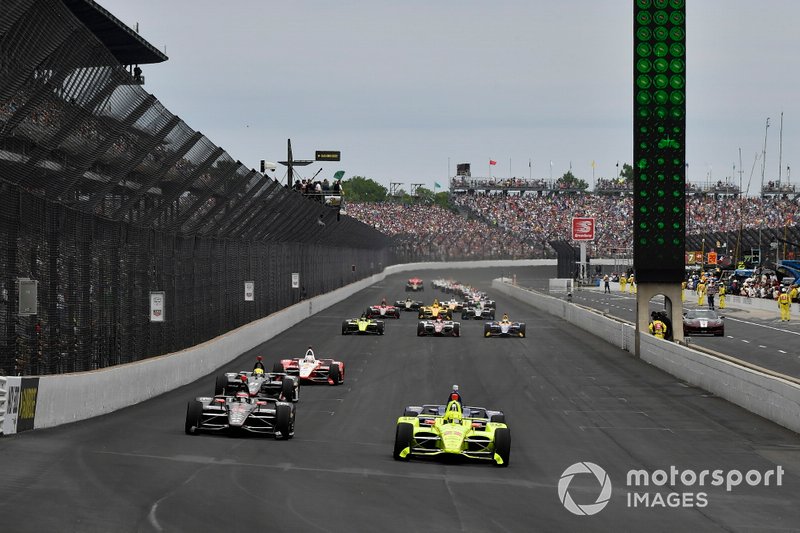