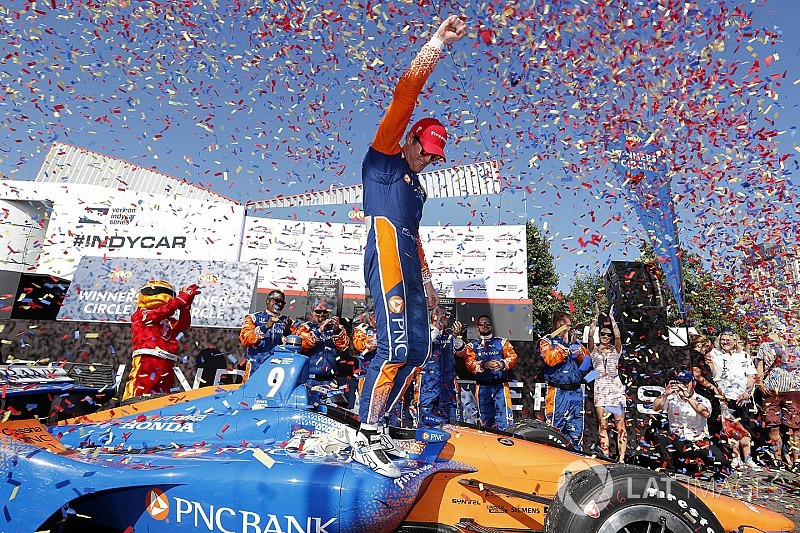 Scott Dixon was in commanding form in Toronto once his principal title rivals hit the wall and/or each other, while Simon Pagenaud came home second ahead of hometown heroes Robert Wickens and James Hinchcliffe.

At the start, Will Power made a dramatic flick to the inside of teammate Simon Pagenaud to move up into third… except it became fourth when Andretti Autosport’s Ryan Hunter-Reay zapped both of them around the outside to move into third behind the polesitting Penske of Josef Newgarden and the Chip Ganassi Racing-Honda of Scott Dixon.

Alexander Rossi’s Andretti car then tried to make a move around Power in the final complex but when he was rebuffed, he lost momentum and Takuma Sato passed him around the outside of Turn 9 to snatch fifth. Rossi tried to retaliate but couldn’t find a way through.

Pagenaud had fallen to seventh, just ahead of the battling Schmidt Peterson Motorsport-Hondas of Robert Wickens and James Hinchcliffe, who were split on the second lap by a charging Marco Andreti, up from 14th on the grid.

After 10 laps, Dixon still lay within one second of Newgarden, with Hunter-Reay around 3sec back with Power just under 1.5sec behind the Andretti machine.

Ed Jones pitted his Ganassi car early but stalled as he tried to leave. He fed back onto the track right in front of Newgarden and eager to stay on the lead lap, he also helped back up the leader into the other Ganassi car. However, on his fresh tires, Jones was able to pull a gap on Newgarden and Dixon still couldn’t pass the lead Penske.

Hinchcliffe was another early stopper, pitting on Lap 15, and teammate Wickens did the same a lap later, both of them switching from the alternate compound to the primaries. Just four laps later Sato and Rossi had done likewise.

Hunter-Reay and Pagenaud hit the pits on Lap 22, Newgarden and Dixon a lap later, and Power a lap after that. Those two strong laps longer on his original reds were enough to jump Power ahead of Hunter-Reay who’d also been caught up behind Spencer Pigot who – like Ed Carpenter Racing-Chevrolet teammate Jordan King – had started on black primaries.

Then Power was slow out of the final turn, possibly a result of contact with the wall and Hunter-Reay out gunned him down to Turn 1. Down the straight to Turn 3, Rossi went to go aournd the #12 Penske as well but dislodged his front wing on Power’s rear tire…. And the pair of them arrived at the turn to discover Hunter-Reay in the tires and stalled. Out came the full course caution, ruining the races of King and Graham Rahal who’d cycled to the front on primaries as they tried to run an extended opening stint.

Under yellow, Hunter-Reay, Rossi and Power came to the pits for repairs – the Andretti cars simply needing new wings, but Power having to sit static while his right-rear suspension was repaired.

This fracas allowed Sato, Pagenaud, Wickens, Hinchcliffe, Andretti and the two AJ Foyt Racing cars and to pull up onto the tail of Newgarden and Dixon. As the green waved, Newgarden understeered and then oversteered into the wall at the final turn. At Turn 1, there was yet more chaos, when Rahal tagged the Carlin car of Max Chilton, and there was a true pile-up that again involved Rossi and Hunter-Reay, and Bourdais who’d already had one spin. Power who’d just emerged from the pits, stayed offline, then saw nowhere to turn in and found no grip, so he slid into the tires.

Avoiding the farces and collisions, Dixon had held onto the lead, while Robert Wickens had dived down the inside of Pagenaud and suddenly found himself second. Behind Pagenaud’s Penske were Sato, Andretti, Hinchcliffe, Kanaans Foyt car, Kimball’s Carlin machine, Conor Daly making a one-off appearance for Harding Racing, and Dale Coyne Racing’s Zachary Claman de Melo. Meanwhile Rossi, Hunter-Reay and Power were at the back – RHR one lap down, Power two laps down.

At the restart, Andretti and Sato went wheel to wheel and Marco got the better of it, while Veach sliced past Daly and into ninth and Kanaan got around Hinchcliffe. Then out came another caution – Binder had spun his Juncos car at Turn 8.

Amazingly, given the carnage we’d witnessed, everyone behaved on the restart and Dixon pulled out a 3sec gap on Wickens who was 1.4sec ahead of Pagenaud who’d pulled two seconds on Andretti.

Sato ducked into the pits from fifth place on Lap 53 of 85, with Jones, Hinchcliffe and Veach doing likewise the following lap. Wickens did the same on Lap 55, and Dixon and Pagenaud followed suit on successive laps. Pagenaud’s crew got him out ahead of Wickens, who stumbled into the rear of the Penske at Turn 1. Hitting the push to pass Wickens drew alongside the Frenchman into the brake zone at Turn 3, then tried to cut in sharp, and Simon would have none of it, elbowing the local hero’s car into a wall-rub on the exit of the corner.

All this shenanigans left Pagenaud seven seconds behind Dixon, although he set about trying to cut that down, with Wickens just one second behind and gradually pulling clear of Andretti, who in turn had a 3sec margin over Sato. A little further back, Hinchcliffe, Kimball, Kanaan and Pigot demoted Leist to tenth over the course of Laps 62 through 65, prompting the Brazilian teenager to pit.

Sato lost control of his RLLR car at the final turn on Lap 68 and lost his fifth place, but didn’t cause a caution period as he coasted down an escape road.

Hunter-Reay, desperately trying to stay on the lead lap, held up Dixon in the closing stages, only pitting on Lap 73. By then Pagenaud had sliced his deficit to Dixon from 7sec to 1.4. When RHR pit, Dixon cut loose and in two laps had extended his lead to 2.6sec.

Pigot’s hard-earned eighth disappeared with a hefty final-turn wall-smack on Lap 76, which forced him to pit.

With the top four – Dixon, Pagenaud, Wickens, Andretti – remaining fairly static, the main interest in the closing laps was the remarkable Kimball who was running less than a second behind Hinchcliffe and trying to give Carlin a top-five finish.

Then drama – Andretti was running out of fuel, and had to pit for a splash and dash, moving Hinchcliffe and Kimball into fourth and fifth where they remained to the checkered flag. Kanaan scooped sixth for Foyt ahead of Veach.

Andretti’s last lap pain may well prove to be Rossi or Newgarden’s championship gain, as they moved up to eighth and ninth, and scraped a couple more points. But in the context of Dixon’s drive, his rivals could only manage salvage jobs. He came into the weekend leading by 33 points, and will depart Toronto with a lead of over 60.

Power scored fastest lap, the only driver to click under the 60sec barrier, but he must now surely be considered an outsider in the title fight. But then, maybe everyone is now; everyone, that is, except for the man who scored his 44th Indy car victory today.