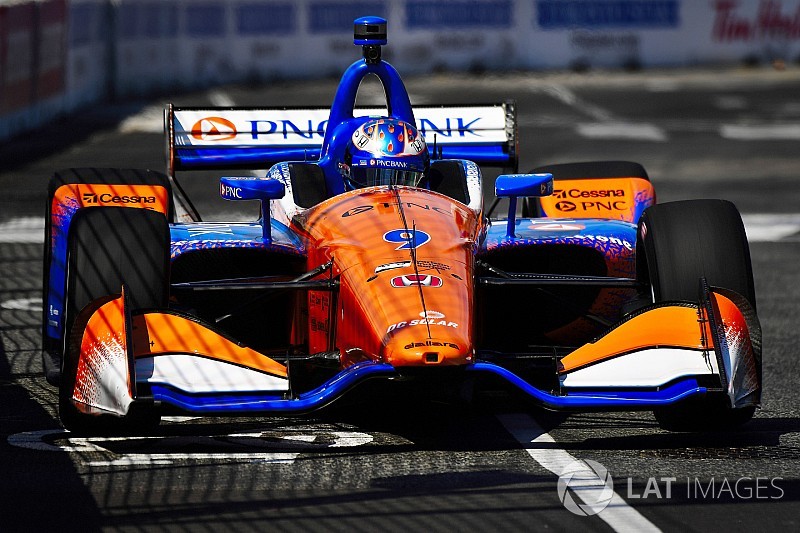 Primary or alternate compound tires, Scott Dixon appears to be the driver to beat this weekend at Toronto, as he nailed fastest time in FP2 by over 0.4sec.

The four-time champion and current points leader took his Chip Ganassi Racing-Honda around the course in just 59.0751sec, an average speed of 108.838mph, as everyone inevitably set their best times on the one set of alternate compound tires they’re allowed to run in second practice.

Again, Dixon’s strongest opposition came from a Rahal Letterman Lanigan Racing-Honda, but this time it was 2017 Indy 500 winner Takuma Sato who landed P2, while teammate Graham Rahal emerged with his car unscathed following an eye-catching spin out of the final turn, and took fourth.

The RLLR cars were split by the fastest of the Andretti Autosport machines, that of Detroit polesitter Marco Andretti. He beat teammate Alexander Rossi by half a tenth, while Ed Carpenter Racing’s Spencer Pigot – who scored his first IndyCar podium at Iowa last weekend – was an impressive sixth and fastest Chevrolet runner.

Defending Toronto winner and defending champion, Team Penske’s Josef Newgarden was seventh fastest but it was a torrid session for teammate Will Power who not only grated his left-hand wheels along the Turn 1 wall but then also slithered into the Turn 1 run-off area, eventually winding up 16th, 1.2sec off Dixon’s best.

Newgarden not upset over Iowa, positive for Toronto, excited by title fight