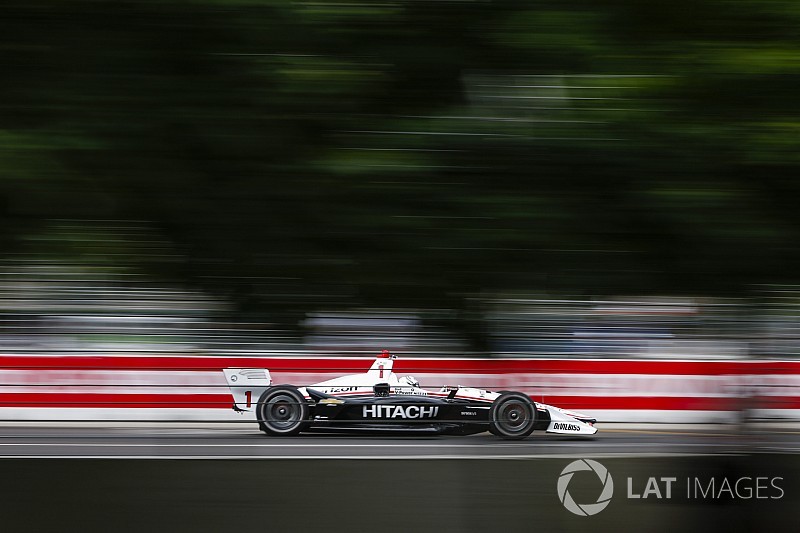 Josef Newgarden put in a brave final flying lap to snatch his fourth pole position of the year ahead of points leader Scott Dixon, and simultaneously bump his teammates down to the second row of the grid.

With damp patches on the track, Team Penske-Chevrolet’s Newgarden had a (relatively) flawless run to set a 59.4956sec lap and beat Dixon’s Chip Ganassi Racing-Honda by two-tenths of a second.

Both Dixon and Will Power – who will start fourth alongside another Penske teammate, Simon Pagenaud – were left ruing mistakes on their final flying laps, the points leader getting loose on damp concrete and this year’s Indy 500 winner admitting he got way too much understeer on what should have been his best lap.

Andretti Autosport teammates Alexander Rossi and Ryan Hunter-Reay will line up alongside each other on Row 3, thus ensuring the top five in the championship are all in the top six on the grid.

Takuma Sato will start seventh in the faster of the Rahal Letterman Lanigan Racing-Hondas, alongside Ed Carpenter Racing’s Jordan King.

The fifth row will be all-Canadian, all-Schmidt Peterson Motorsports, while Conor Daly’s bravery in the wet Q1 Group 1 session paid off with a mid-grid slot for the Harding Racing-Chevrolet team. He’ll start alongside another surprise Q1 transfer, AJ Foyt Racing’s rookie Matheus Leist.

Ed Jones spun his Ganassi car in Q1 Group 1 causing a red flag, costing him his two fastest laps and any chance of advancing. The stoppage also pinched everyone else’s chances of a final flyer on wet tires to just two minutes. Daly was the hero of the moment, bumping Graham Rahal out, while Sebastien Bourdais’ last roll of the dice wasn’t quick enough when he couldn’t get his wet tires up to temperature.

There were two surprising casualties in Q1 Group 2, which saw almost all the field start on wets despite the drying line. Spencer Pigot went out on red tires straight away and showed his rivals the way by lapping whole seconds quicker, but once the others followed his example, the Ed Carpenter Racing car tumbled down the order having taken the edge off his tires by the time the track was at its best.

Marco Andretti was the other shock exit, having looked a top-five car all weekend, but being one of the first to switch to the reds, he suffered the same issue as Pigot.

Teammate Zach Veach was spectacular, but when he spun at the final turn, he too lost his two best laps.