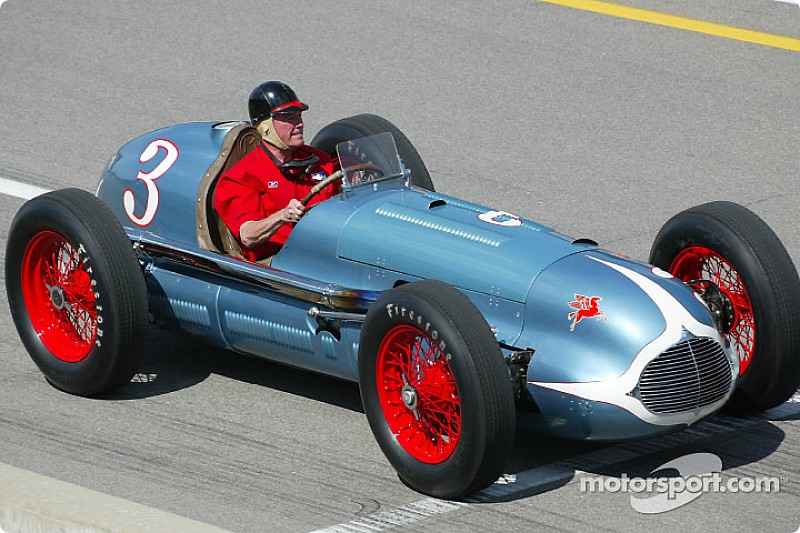 Everything about the cars has changed since open cockpits made sense, except for protecting the driver's head. That must end.

See that car in the photo above? That’s Johnny Rutherford, behind the wheel of the Blue Crown Spark Plug Special. That car, or one of its sisters, dominated the Indianapolis 500 from 1947 to 1949.

When you see Rutherford sitting there, it’s easy to imagine Mauri Rose in that seat, battling the car, the track and the competition to a win. Fighting the wheel, arms akimbo, trying to make those hard, narrow Firestone tires handle the power from the Offenhauser engine. You could see his face. His eyes.

In earlier years, maybe you could have even seen Barney Oldfield chomping on a damp cigar.

That, race fans, is why we have open cockpit cars.

That first year the Blue Crown Special won, in 1947, 33 cars failed to qualify – that’s what a big deal the Indy 500 was then. Drivers and cars were dispensable. Shorty Cantlon died in a crash on lap 41 in the 1947 race, his 11th start at Indy. They pulled Cantlon’s corpse from the car, but left the car sitting next to the wall for the rest of the race. And George Robson didn’t get a chance to defend his 1946 Indy win in ‘47, having recently been killed at Lakewood Speedway.

But that was racing then. Open wheels, open cockpits, open casket if the undertaker was talented enough.

Now see that second photo, top left there? That’s Justin Wilson at Pocono, before he was killed when a hunk of Sage Karam’s nose cone fell from the sky and hit Wilson in the head, after Karam crashed.

All you can see is Wilson’s helmet. He is looking out through a slit in the helmet, covered by a visor. That’s how modern open-wheel cars are now. You see a helmet, attached so tightly to the driver that you can’t see him or her move their heads, because they can’t. You can’t see them fight the wheel.
You can’t see anything, except a helmet.

In the olden days, it was cool to see A.J. Foyt or Mario Andretti sawing on that huge steering wheel, but the cars changed. Everything changed but one thing: The driver’s head is still exposed.

And it’s time that changed.

The time is now

I wanted to wait until the IndyCar season was over to write this: I wanted it to be thought out, not reactionary. But after more than a week of thinking about it, I can’t come up with one practical, or even traditional reason why series like IndyCar and Formula 1 can’t provide comprehensive protection for the driver’s head. A canopy? Maybe. An extended, raised windscreen? Possibly. Geniuses design race cars now. Give them the mandate and some bandwidth and let them work.

I was at an informal dinner with the Audi factory sports car drivers during a pre-season test at Sebring, where they were trying out the new Le Mans package. Which included a new enclosed cockpit. The drivers complained about decreased visibility, about the mildly claustrophobic sensation.

That was in 2011. Recall that defending Le Mans champ Mike Rockenfeller’s No. 1 Audi launched through the guardrail and into the woods, in the middle of the night, after making contact with a Ferrari driven by NASCAR team owner Rob Kauffman. Rockenfeller was OK.

That was after Allan McNish’s No. 3 Audi hit another Ferrari, this one driven by Anthony Beltoise, and vaulted into the fence, barely 50 minutes into the race. The car was demolished. McNish was OK. Many of us there in the Le Mans press room thought he was a goner, and we saw our own Anne Proffit, camera in hand, barely dodge the debris field.

If the Audi drivers complained about the enclosed cockpits after that, I never heard it.

Every open-wheel driver, be they in Formula Vee or Formula 1, is aware of the danger. They signed up, knowing that.

But I contend that there is no glory, no glamour in getting killed by a piece of flying debris, like Justin Wilson. Or Henry Surtees, who died driving a Formula 2 car when a 64-pound tire and wheel hit him in the head after it separated from Jack Clarke’s crashed car. Or when Ayrton Senna’s own tire and wheel hit his head, followed by pieces of broken suspension that penetrated his helmet.

Similar incidents may not have been fatal, but could easily have been. Felipe Massa’s head was struck by a metal spring in qualifying for the 2009 Hungarian Grand Prix. Cristiano da Matta was nearly killed when a deer crossed his path during a Champ Car test at Road America.

There is no guarantee that increased head protection could have saved F1 driver Jules Bianchi, or IndyCar driver Dan Wheldon. But how could the outcome have been worse?

Look at that 1947-era Blue Crown Spark Plug Special, and at Justin Wilson’s 2015 Dallara. Everything has changed. Except the one thing that could have saved his life.