Upsetting end to a perfect beginning for Sebastian Saavedra at Indianapolis 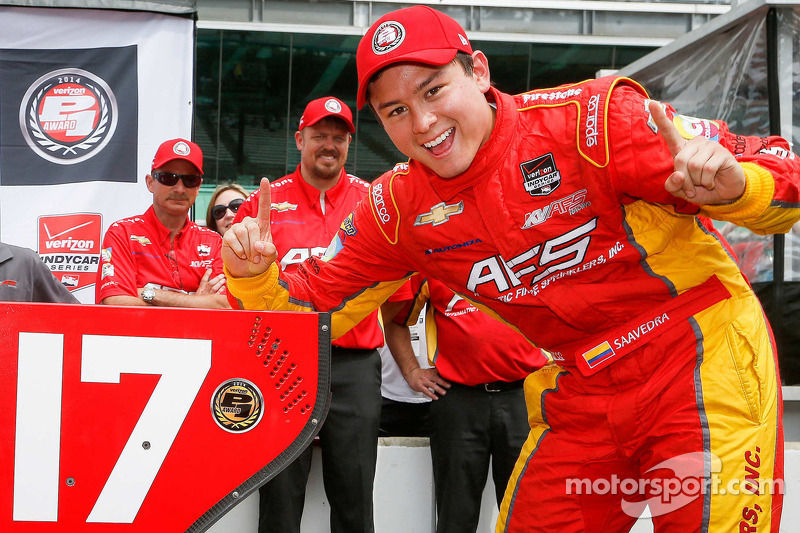 May 10, 2014 - KV AFS Racing's Sebastian Saavedra's race was over before it started today for the inaugural Grand Prix of Indianapolis at the Indianapolis Motor Speedway in Indianapolis, Indiana.

Saavedra made history yesterday when he claimed the first pole position for the GP of Indianapolis and also secured the first pole in his IndyCar career. However, the memorable moment was short-lived when the cars got ready for the standing start today. As the green flag was shown, Saavedra's hand was waving to officials that his No. 17 KV AFS Racing car had stalled. While he sat helplessly on the grid, the other drivers frantically tried to dodge him as they launched away from their starting spots, but Carlos Munoz couldn't avoid him and then Mikhail Aleshin slammed hard into the rear of the car and Saavedra's day was ended.

"I don't know what happened," said Saavedra, who walked away uninjured. "As soon as I released the clutch, the revs went from 11,000 RPM to zero, which shouldn't have happened. I just feel so bad for the entire KV AFS team, the guys worked so hard to give me such a strong race car. It's amazing how the happiest moment can turn around so quickly. We won't give up, though, we still have a long season ahead and will prepare now for the Indianapolis 500."

Coming into this weekend, Saavedra has produced some solid results. He has led two races, which was the first time in his IndyCar career (Long Beach and Barber) and also climbed an impressive 13 places in Long Beach, to secure his first top-10 finish of the season. Saavedra now sits 17th in the championship standings with 63 points, just 18 away from 10th.

The 23-year-old, from Bogota, Colombia, has been among the youngest drivers in nearly every series he has competed in. He joined the Firestone Indy Lights just before his 19th birthday and that year was awarded Rookie of the Year honors with AFS Racing/Andretti Autosport. He moved to Bryan Herta Autosport for 2010, where he made his Indianapolis 500 debut becoming the third Colombian driver to do so. Saavedra then stepped up to the IndyCar Series in 2011 with Conquest Racing before returning to Indy Lights in 2012. Last year he spent the entire season back in IndyCar with Dragon Racing.