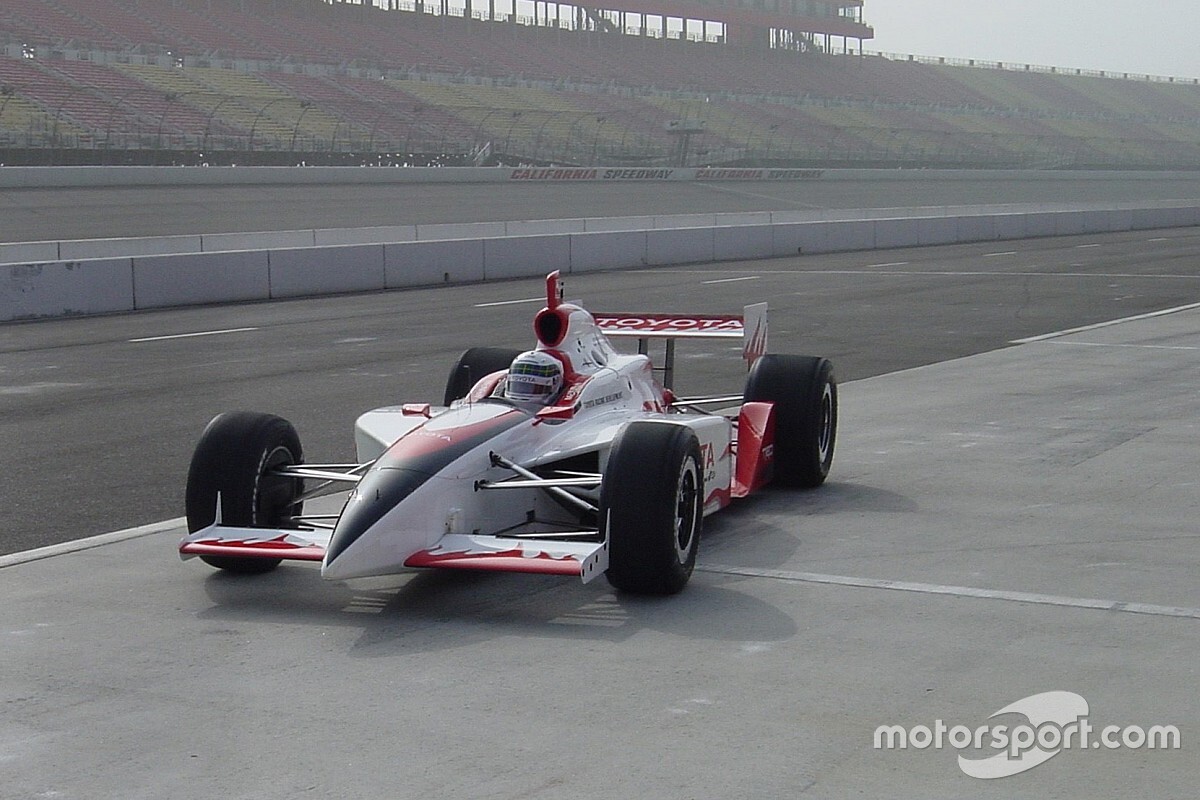 Just days after his terrifying Formula 1 crash at Suzuka, a battered Allan McNish went to the United States to take on an equally frightening IndyCar oval test with Penske at Fontana. By Andy Hallbery

Allan McNish can easily claim rights to being one of racing's great all-rounders of his generation.

After a blazing karting career, he climbed the single-seater ladder from Formula Ford upwards in the traditional way, and was knocking on Formula 1's door, soon becoming McLaren-Honda's test driver and understudy to Ayrton Senna and Gerhard Berger.

He has won Le Mans three times, been American Le Mans champion three times but has also raced in the Porsche Supercup and DTM in his career. Having hung up his helmet in 2013, he is now team principal for the Audi Abt Formula E team.

The one thing missing from his illustrious repertoire is IndyCar. But there were a couple of near misses, not least a test with the powerhouse that is Penske in October 2002 at Fontana, California.

McNish's dream of racing in F1 came true in 2002 with Toyota, but that chapter of his career ended with a bang... literally.

The Scot's maiden F1 season had its finale at Suzuka, a circuit where McNish had completed thousands of laps previously in his role as test driver for McLaren. An enormous crash in qualifying at the mighty 130R destroyed his car and the barriers and he was declared unfit to start what would have been his final GP the following day.

But behind the scenes he already had an IndyCar test with Penske lined up for the following week.

"Toyota wanted me to have a run in the car, and they had sorted it out with Penske who was their works team at the time in the States," McNish said 18 years later. "I was interested in doing it because I'd driven an IndyCar before, but never on an oval. I'd only ever driven on road courses, and that's a completely different fish."

McNish's lifelong friend Dario Franchitti had been racing CART IndyCar as it was then since 1997 and was just about to move to the Indy Racing League full-time for 2003. 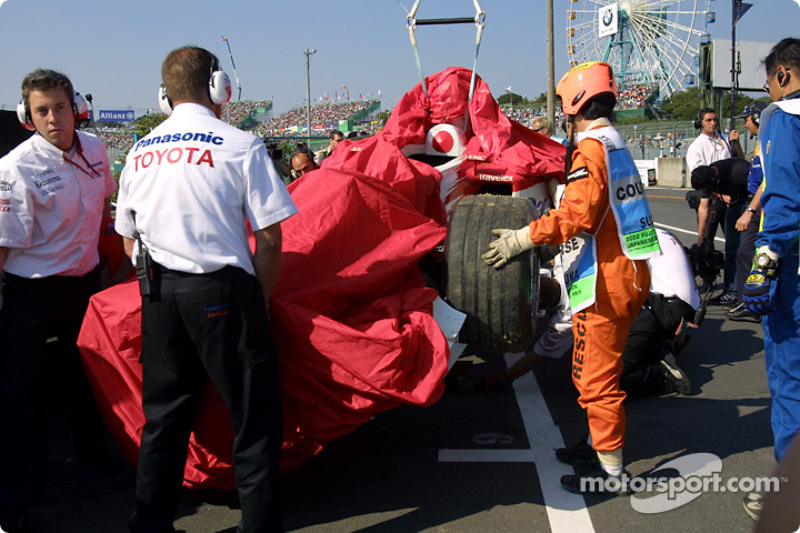 Allan McNish's wrecked Toyota back in the pits

"I knew Dario's experiences on the ovals and how difficult it was. I'll be honest with you; I was nervous about what it would be like," he said.

"I went to Penske for a seat fitting, and that alone was new for me. Normally in a single-seater you sit in the middle of the car, and everything is in proportion either side. But with this, you sat in the car, and then squashed yourself up to the left-hand side, because you needed the support outside as all the corners were left-handers. It was like the whole seat came around you.

"Think of sitting in a seat with an airbag on top of you! But ultimately, if you hit the wall at 200mph, it was going to hurt, so you needed the maximum protection.

"I did that, then went to Japan for the final grand prix of the year and had that almighty shunt in Saturday's qualifying. The next day I had a whole load of problems, because some vessels burst in my right leg and the blood was just pumping in to what turned out to be something like a half melon on the side of my knee. The whole of my right leg was bruised, black and blue, from the base of my feet, all the way up to my hip."

Wounded but not giving up, McNish was cleared by F1 doctor, Professor Sid Watkins to fly to the States from Japan that Sunday night with a clear set of rules.

"The Penske test was the following week," he said. "Sid went through all the steps that I would have to go through to stay safe for him. I had to go out and buy something that he absolutely swore by, which at that time in my life I didn't really care about - compression flight socks. I had to sit in a certain way, and walk around in a certain way, because he was more than concerned about blood clots and me flying which clearly made me a little bit panicky to say the least."

McNish flew from Japan to Los Angeles, and there he was cleared fit to drive on the ground by a doctor in California, although battered, bruised and with a massively swollen right knee. Time to face his first oval experience, and 220mph laps.

"I'd been to Fontana before to watch Dario race, and when it was full of people and cars it had a real energy," McNish recalled. "When it's empty and it's one car and a couple of people floating around the paddock, then it's really quite a bizarre experience. It's such a fast, fast, place."

With Team Penske he was in good hands and being an oval virgin, the Scot also had help from one of the best there is. 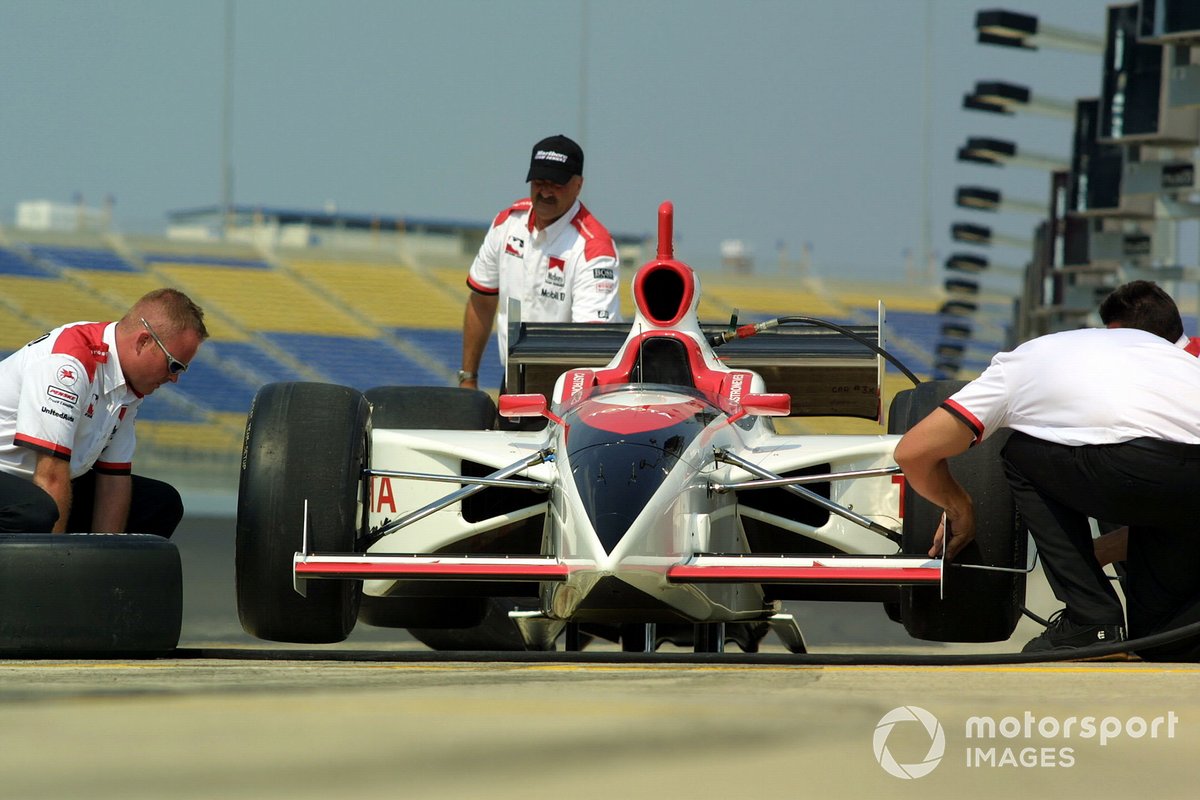 "Rick Mears was there to guide me through it," said McNish. "In advance I'd said to the team: 'Look, I'm going to need a couple of days here to get up to speed on the oval.' And they casually said, 'yeah, yeah, no problem at all'. It was Roger [Penske] and Tim Cindric. Tim said, 'I don't think you will, I think you will be OK. But we will hold a second test day, if you need it'."

For Penske this was a true test, not only of Allan. It was also its first run with its engine for the following season, a whole new project.

"I'd done a bit of pre-work with Gil de Ferran because Gil and Helio Castroneves were the team's drivers," the Scot explained. "I phoned Gil who I'd known since 1989 [both McNish and de Ferran were Paul Stewart Racing graduates in F3] and Gil gave me a bit of a low down on what the car was like, but also what they were looking to try and do, the things they were thinking about testing. I was just focusing on me trying to get used to what I thought was going to be a bit of a handful on an oval.

"I tenderly jumped in the car, drove out the pitlane and drove the first lap absolutely terrified, building up slowly. By about lap six or seven it was nearly 200-210mph. And then suddenly you go flat out. And that was it. Normally you are edging up to the limit of grip.

"After those seven laps or so I was flat out until the end of the day. Out lap, in lap, every lap. Not even a question, not even a thought about it."

It says a lot that a battered McNish did a full day in the Penske-Toyota, some 175 laps of the two-mile circuit and only 25 laps short of that year's race distance. It also brought back his test driver skills and mindset very quickly.

"Immediately I'd gone from being terrified of this thing to this is completely different," McNish recalled. "How do I maximise this in terms of driving for performance? It became all about minimising tyre scrub, maximising exit speed.

"I'm sure if the car had been loose and started moving around then my backside sensor would have been going into 'oh shit!' mode. But as it was, it wasn't, so in that respect it was just very, very different."

Oval racing is a whole new skill, and a bit Marmite. You either love it and embrace it, or you hate it. One thing is you must do is respect it. McNish was fully armed and with an open mind when he accepted the test.

"That's the funny thing. I stood on the outside of Turn 1 when they were racing at Fontana," he explained. "Dario had told me to lean up against the fence because you feel the wind pushing up against you. And immediately they were through Turns 1 and 2, on to the back straight and gone. When you are watching it, you honestly look at it and think 'shit!' But when you are in the car it certainly doesn't feel like that." 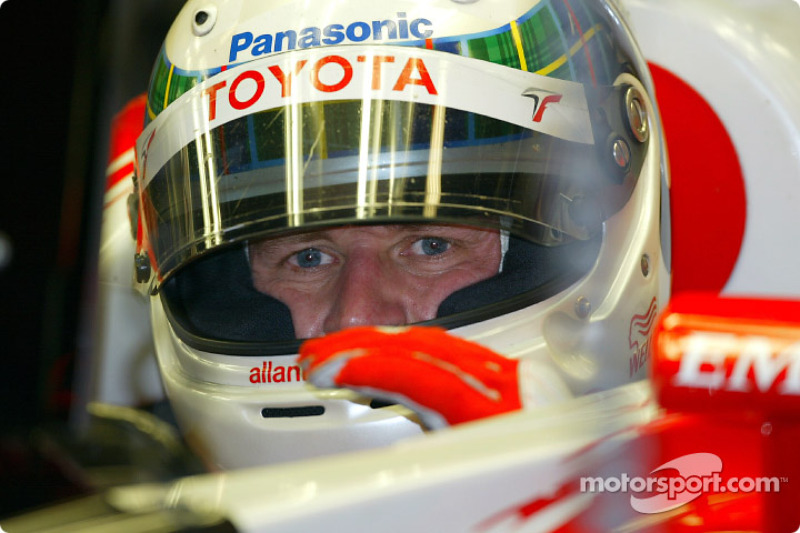 Driving alone at a superspeedway is one thing. Racing there would be another. At the very least, it was an option.

"There were a few moments that day where I thought 'hmmm, that was a bit close,' and you look down and you realise you are doing 100 metres per second," he said. "Suddenly you understand how accidents on any big oval can last 600 metres down the following straight and be so violent. You are running up against the concrete wall with 900-1000kgs of car. That is a lot of energy.

"I did enjoy it, no question, partly because it had been terrifying! But I also found myself driving and thinking, 'I wonder what this is like with 20 other nutcases trying to fight for the position?'

"On your own it's fun, and that is what I came away with. It was easier than I expected in terms of driving a flat-out lap, relative to driving a flat-out lap at Suzuka in an F1 car, or a full-on qualifying lap at Le Mans. However, when you then put everybody together and you've got the drafting, which is when it takes a completely different skill set.

"Racing the car would have been massively challenging and a big, big learning process. When I came home from there - and Toyota was keen to do it - there was no question it was a possibility for 2003. However, Penske already had their two drivers sorted out with Gil and Helio.

"For me it had to be with a really top running organisation. I was either going to do it with the right level at the top with the people around me that would a) give me the chance, and b) I would know the car would be 100%, or I wasn't going to do it at all.

"I got home still thinking about it and was walking down the street that week when I got a phone call from Flavio [Briatore]. In his very curt way he said, 'are you wanting to come and have a chat with us about wanting to do the reserve F1 driver role at Renault?'

"I knew Flavio from Benetton times before, so I went in to see him and a few days later, that was the deal done, and the IndyCar option was put to bed."

McNish had ticked a box by running on an oval. He'd already tested a CART IndyCar at Sebring for Bettenhausen (alongside fellow sportscar stars Tom Kristensen and Jorg Muller) and now happily retired, sums up his experiences.

"I'm not one to look back and think 'what if'," he said. "But I would have liked to have raced in IndyCar.

"It's a type of car that I think would have suited me well, a big brute, 'muscly' car that you have to throw around. That period from the late 1990s to the early 2000s - the racing from the competition level, from the enjoyment of driving the car and the series, I think it was absolutely top. It was fantastic.

"There is no question IndyCar was on my radar through that period. The race where they really trim them out is Indianapolis and the 500, and I'm sure going to Indy would have been a different kettle of fish again.

"I'm a little bit disappointed that at some point I didn't do it, but there was always a next door opening, like the situation with Renault F1 that came along. For every door that closes, another opens, and ultimately you've got to play with the cards that are delivered. That revolving door took me in a different direction."