Wickens: No issues with Pagenaud “because we both made it through” 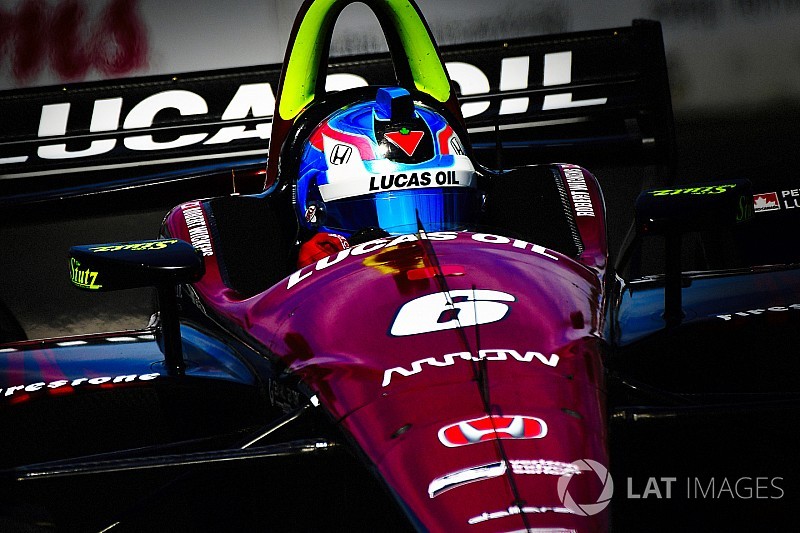 Canada’s latest IndyCar hero Robert Wickens says losing his wheel-banging fight with Simon Pagenaud over second place would cause no hard feelings because both cars survived the clash.

Team Penske’s #22 crew managed to jump Pagenaud ahead of Wickens in the second and final round of pitstops, the 2016 champion having stopped one lap later. The Schmidt Peterson Motorsports-Honda homed in on the tail of the cold-tired Penske, but nerfed it on the rear attenuator rather than got the inside line.

The pair then shot off down long straight to Turn 3, Pagenaud protecting the inside line and Wickens getting around one-third-of a car’s length ahead but as he turned in on the longer and more slippery outside line, he appeared to give Pagenaud very little room. The Frenchman stayed alongside and, upset at being squeezed, unwound his steering to run his rival wide, where he had to give way or hit a wall.

Although he expressed displeasure over the radio, Wickens played down the incident post-race, sitting alongside Pagenaud in the media center.

“I was expecting him to actually overcut me because I made a mistake on my out-lap,” said Wickens. “I was kind of cursing myself the whole lap thinking, Oh, God, this should be interesting. I was thinking, ‘I need a little bit more, a little bit more.’

“I tried going into Turn 1. He defended it. We had a little contact there. Then it was kind of a dogfight straight up at Turn 3. I braked as late as I could, probably the latest through the entire race. Give credit where it's due, Simon was able to match it on cold tires. Hats off to him. Then it was just good, hard racing.

“I was ultimately maybe hoping for a little bit more space on the exit. When the guy is on cold tires, you can only expect so much because he's trying to get as much grip as he can.”

Pagenaud described the incident as “hard racing on the streets of Toronto. Two cars that are battling for the same real estate.

“I'm coming out on cold tires in a position advantage. Robert tried. He had to go into Turn 1 as deep as he could. I really thought I was actually going to crash in Turn 1 after we had contact. But I managed to get a really good run out of Turn 1. From there, I was like, ‘OK, now I'm defending as hard as I can. I have to keep this position.’ It's my job to keep my position and try as hard as I can.

“Obviously it's not about running each other into the walls or crashing together. The key is to just be on the limit of that. Certainly was on the limit, but two very professional racers in my opinion that just raced really hard. That's what IndyCar is about.”

Asked why there were no hard feelings about the incident, Wickens replied: “I think it's because we both made it through… I think if one of us didn't finish, I think there would be very different feelings.”

Pagenaud agreed with this assessment, and Wickens added: “To be honest, we were both right on the edge. I think that's what IndyCar racing is all about. We both definitely pushed the boundaries, but we didn't go too far where you just destroy the other guy. I think that's where the limit was.”