Wickens will be an IndyCar champion, says Power 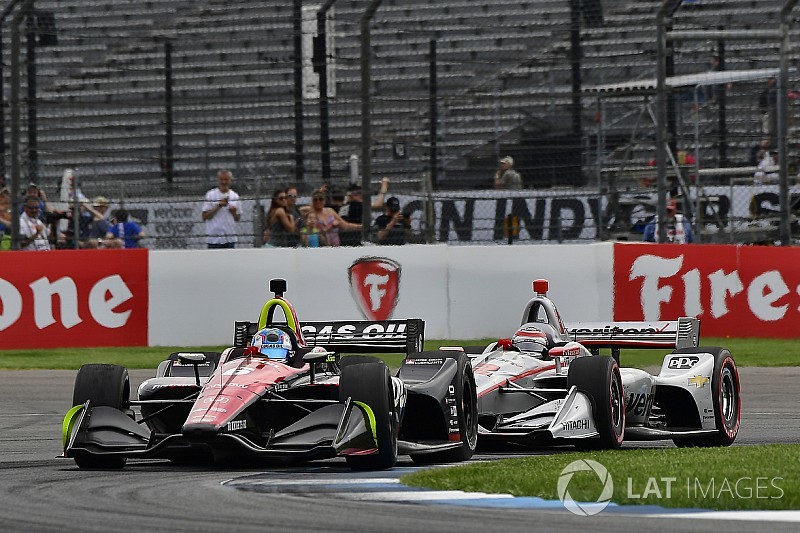 Schmidt Peterson Motorsports’ IndyCar rookie Robert Wickens will be the series champion, according to Team Penske’s Will Power, who added that the title could even go the Canadian’s way this year.

On Friday, Power beat Wickens to pole position on the Indianapolis Motor Speedway road course by mere hundredths of a second – much as Wickens had done to Power on the Canadian’s debut in St. Petersburg in March – and the pair then had a spirited battle for the first two-thirds of the race.

They gave each other racing room in their two dices for the lead, as one would gain an edge through using the faster tire compound. Wickens fell to third behind Scott Dixon in the final stint as he struggled with going quick while fuel-saving.

Afterwards, Power singled out the SPM-Honda driver for praise, stating: “I haven't raced him enough, but we passed each other twice no problem and it was clean racing. He's obviously very good.

“I think big fuel saving is probably a new thing for him – Dixon and myself have been doing it our whole careers and we're used to trying to extract lap time and fuel save.

“But I tell you, [Wickens] has been racing at a high level for a long time…he's definitely a guy that will be a champion in IndyCar. I have no doubt in my mind, at some point and in the right situation – and that could be this year!”

Wickens, who scored his second podium finish and SPM’s third podium in five races, confirmed that his unfamiliarity with going fast while saving fuel had been the major factor in him falling away from Power and Dixon.

“That was the first race where I kind of felt like a true rookie in that final stint because I've never had to save fuel before. We've kind of practiced it a little bit in warm-up where you do like one lap of fuel save. But the amount of fuel we were having to save to make that work was something I didn't even think was possible.

“I was told the fuel number I needed to achieve, and then I was like, ‘OK, Scott is on push-to-pass, so I don't know if I should use it to keep him behind or if I should hit my number.’ We were actually having an issue with my push-to-pass all day, it wasn't quite working the best that it could.”

Wickens said that perfecting the art of throttling off early but running harder through turns was something that had never been seen as a priority during his test program with Schmidt Peterson.

“So… I'm not really practicing it that much, and it's something that became very apparent to me this afternoon. That’s something I have to work on because obviously they [Power and Dixon] were hitting the same fuel numbers that I was, to try and make it to the end, but their pace was way quicker than mine.

Dixon: “A team like ours shouldn't be as lost as we were”