Team Penske’s Will Power is the Fred Astaire of road racers because he makes running fastest look so effortless. The Australian racer posted a pole time of 1:17:2709, a new track record not just because it’s fast but because the track formerly known as Infineon has been reconfigured for 2012 due to the input of among others, Will Power and Ryan Biscoe. Power also credits the overall consistency of Team Penske in working so hard to perfectly prepare his car for the pole winning lap. It is worth noting that this is the 3rd consecutive pole for Power at Race Sonoma and that he has won the past two races here. To say he is the favorite to win the race Sunday would be an understatement.

""It's good to back on the pole here in Sonoma in the Penske Verizon Chevy #12 car," said Briscoe. " It is important to start up front here and we are very happy to once again be on the front row, which is where we want to start. This track was great for the team and we look to continue our success as a team here. I just really like this track and I would love to make it three in a row here."

Qualifying second was Power’s teammate and fellow Australian, Ryan Briscoe. Briscoe’s time was only tenths of a mile slower than Willy P’s, at 1:17:4347. When asked if there will be team orders in the race, Briscoe made it quite clear that he wants the win himself very much and the only help he will give Power and their other teammate Castroneves is to “try not to wreck them”. Faint comfort for the other two Penskes, one would imagine. 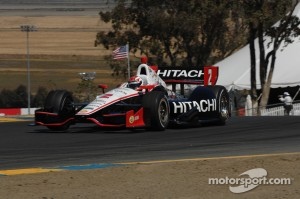 The true surprise of the session was the third place qualifying of Champ Car multi-year champion Sebastien Bourdais. He seemed to take a good deal of ribbing from the other fast 6 drivers, but he indicated that he had expected to do this well much earlier in the season. The Bourdais who qualified today was greatly reminiscent of the pre Formula 1 Bourdais.

Rounding out the top 6 was championship contender Helio Castroneves in 4th place. The Target Chip Ganassi teammates Scott Dixon and Dario Franchitti were in positions 5 and 6.

All six drivers seemed to think that the new configuration of the track will open up a lot of passing during the race.

Of qualifying positions 7 through twelve, it was surprising to find Simon Pagenaud and James Hinchcliffe qualify outside the top 6. Both drivers were quick during the two practice sessions but were unable to translate this into faster qualifying times. They and the Target cars may prove to be factors in Sunday’s race.

Cameron on Penske in LMP2: We want to learn but also race to win