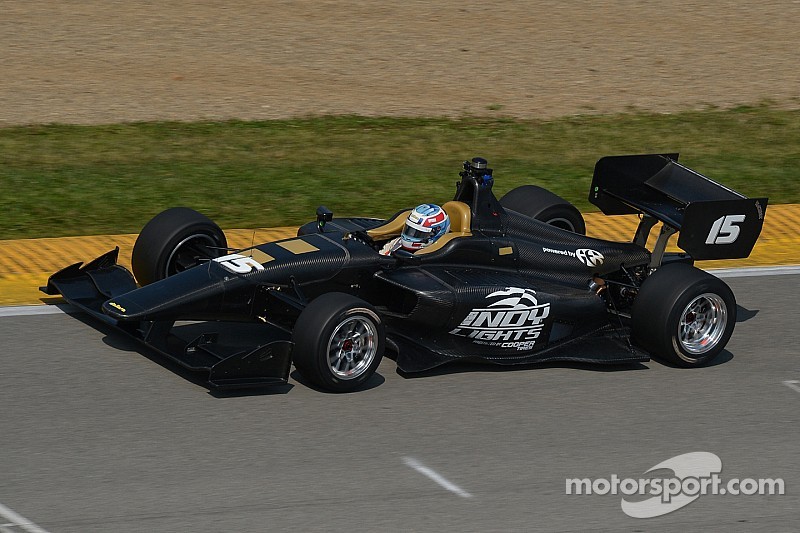 Tristan Vautier turned in 85 reliable laps, the quickest of which eclipsed the prior weekend’s Indy Lights pole time by more than a half second.

A bright new future for the Indy Lights Series, the top rung on IndyCar driver-development ladder, was unveiled at the Mid-Ohio Sports Car Course earlier this week and that future is powered by Advanced Engine Research. In its first public outing, the new Dallara IL-15 Indy Lights car and its AER-designed-and-manufactured P63 turbocharged four-cylinder, 2.0-litre purebred racing engine performed flawlessly.

2012 Indy Lights champion and 2013 Verizon Indy Car Series Rookie of the Year Tristan Vautier turned in 85 reliable laps, the quickest of which eclipsed the prior weekend’s Indy Lights pole time by more than a half second. But it wasn’t just the brand new car’s early speed that impressed Vautier and the group of Indy Lights stakeholders who were looking on.

“It is a proper race car and definitely a major step forward for the series” Vautier said, noting the new chassis’ improved braking and handling as well as the performance of AER’s P63. “The engine is powerful and has good drivability. It produces the most power high in the revs which is nice because when you drive, you are higher in the revs and you have more gear changes. It makes it a fun car to drive.”

It was a very successful first test for everyone involved – chassis, brakes, engine, transmission and electronics

Monday’s Mid-Ohio outing was the first full day of testing for the car following a 15-lap systems shake-down at Indiana’s Putnam Park the prior week.

“It was a very successful first test for everyone involved – chassis, brakes, engine, transmission and electronics,” noted Andrew Saunders, AER’s engineering manager. “There was no real attempt to fine-tune the set-up on the car. Our objective was to get miles on it. There were virtually no issues and all systems worked well. It was a good day and all the design and operations people back at AER deserve the credit for a successful roll-out. It was a true team effort.”

The P63 represents the direction of modern racing: small-displacement turbocharged engines with modern electronics. With its all-aluminium block able to serve as a fully-stressed chassis member, the engine features advanced engine electronics developed by Life Racing with active knock control, ignition-angle learning, advanced boost-control and integrated gear-shift strategies. The 450-horsepower (with 50 more horsepower available through a “push to pass” feature) P63 will also be economical to operate: it is designed to run a full season without rebuilding.

“The new Dallara IL-15 with the P63 will provide drivers with the modern technology they need on the Road to Indy,” said Mike Lancaster, Managing Director of AER. “Dallara has produced a thoroughly modern race car. It is a well-balanced 600-kilo (1,320 pound) race car with a modern engine powering it. The new car is lighter than the old car and has more horsepower. It will provide a more relevant learning experience for up-and-coming drivers.”

The IL-15 will undergo further testing August 12 and 14 at the Indianapolis Motor Speedway oval, followed by a four-day test on the Speedway road course startingAugust 18 and then at the Milwaukee Mile later in the month. Additional on-track testing is scheduled for a total of ten days of testing followed by final sign-off in September.

The Mid-Ohio test was attended by many of the project’s partners. Their impressions:

Dan Andersen, owner and CEO of Andersen Promotions (which owns Indy Lights and oversees the Mazda Road to Indy):

“The package performed very well and I was amazed at how few issues we had. The “push to pass” was not activated yet and we did not explore many set-up changes, but the car was quick. The car is lighter and is built for road course whereas the current car was built for ovals and then adapted latter. The car is 180 pounds lighter with more horsepower and a modern engine and a modern paddle shift kit. It has everything going for it. It will be a great car, a car that drivers will want to drive.”

“We were very satisfied with the first official test for the IL-15. There’s a lot of happiness for the great job we have done as a group together with Dan Andersen, Tony Cotman, AER, and everyone. The car worked well and Tristan was happy with it. We are looking ahead now to more development testing on the car and finding additional speed.”

Tony Cotman, Indy Lights Race Director (and president and founder of NZR Consulting, who has overseen the new-car project):

“You always go in with lofty goals. It has met and exceeded my expectations, particularly in the way the electronics and the management system talk to each other. The engine has been fantastic – super smooth, a lot of torque and the whole shifting mechanism is just beautiful. We have a lot of great partners and the results show that in a day like today. I am happy for everyone who has put in so many hours on this project. It is always good when things come to fruition and I am most happy for everyone. There has been a lot of combined effort over the last nine months to get to this point.”

“The primary objective was to get miles on the car. The car, engine, transmission, and electronics have all been proven in isolation, but you do not know for sure what you have until you put them all together and prove the package works. We did 85 laps, almost all of it at full throttle on a hot day and everything was without fault. Dallara has done a fantastic job on the packaging and the cooling. Nothing went wrong with the engine. We will continue to develop as there is always fine tuning to do with a new engine: making it idle smoother, honing the pit lane speed limiter, up shift, down shift smoothness, and torque control strategies, but we have a very good baseline to carry on with the rest of the development program.”

“This is a great start for the program and backs up a string of continued good inaugural runs for AER’s products including the GP3 engine and the recent LMP1 bespoke engine. The project is off to a good start and the series is going to be very attractive to aspiring drivers now. The weight balance is more comparable to what they will encounter in Indy Car with a proper turbo engine which is where the racing world is going now and not a production-based engine. The car is safer and stronger than its predecessor and is a large step forward.

“The car has the pace and we have not even scratched the surface on set-up work. Dallara has designed and built a tidy, compact car that is also very good looking. But most important, it will be very relevant to anyone looking to graduate to the IndyCar Series.”