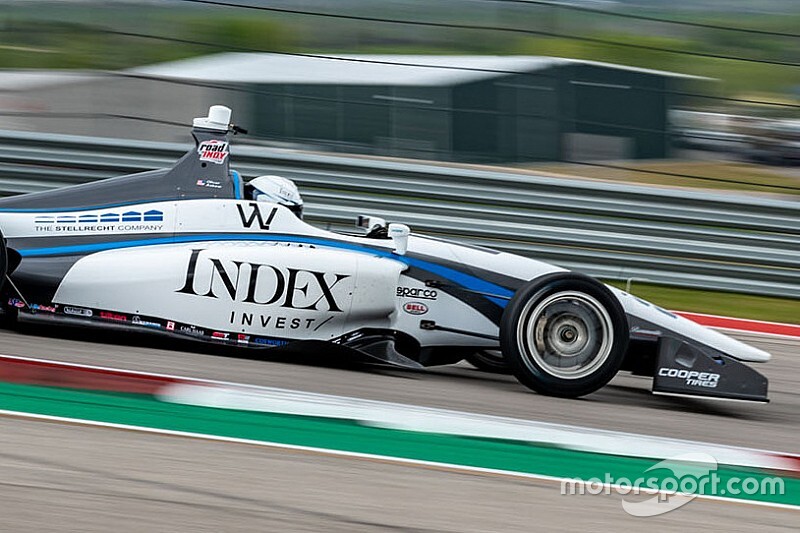 Oliver Askew completed a sweep of the Indy Lights rounds at Circuit of The Americas, after passing Andretti Autosport teammate Robert Megennis on the sixth lap and then surviving a late restart.

From second on the grid, Megennis got the jump on Askew while Rinus VeeKay’s Juncos Racing faltered and fell to sixth behind Zachary Claman De Melo’s Belardi Auto Racing machine, and Toby Sowery sent his BN Racing/Team Pelfrey machine up into third, chased hard by the third Andretti car of Ryan Norman.

Askew stalked Megennis until they hit the long back straight on Lap 6, when he tucked into the draft, hit the push to pass boost and went down the inside of car #27 into Turn 12.

The next move was Claman DeMelo on Norman to gain fourth exiting Turn 11 on Lap 10, and swiftly VeeKay started putting Norman under pressure. After a brief back and forth exchange at Turn 15, Norman held on for another lap, but VeeKay got his next passing attempt all wrong. That allowed the second BN Racing machine of David Malukas up into sixth which became fifth when he performed a slick over-under maneuver on Norman through Turn 1.

VeeKay finally demoted Norman to seventh on Lap 13 of the 20 and disappeared up the road, while Askew was successfully doing the same to Megennis, pulling over 2.5sec clear at the front.

Claman De Melo’s hunt for a podium spot ended when his car ground to a halt on Lap 15, which bunched the field under caution for one lap.

When the restart was called, Malukas outbraked Sowery for third under braking for the final corner – so before they had passed the start/finish line – but Race Control declared it a legitimate pass.

Sowery’s car then faltered and he tumbled to seventh, which left VeeKay in fourth, but all eyes were on the battle for second as Malukas gained on Megennis. Considering he had climbed from 10th on the grid following a technical infringement in qualifying and he’d suffered an incident in Saturday’s race, Malukas wasn’t going to take any wild risks and he crossed the finish line 0.66sec behind Megennis.

Neither of them had any answer for Askew, however, and the former Team USA Scholarship winner now leads the title race by six points from VeeKay.

Julien Falchero in a second Belardi car claimed fifth place ahead of Sowery, while Dalton Kellett was classified seventh but only after collisions with both Norman and the third Belardi car of Lucas Kohl.