Celis claims he had IndyCar options for 2018 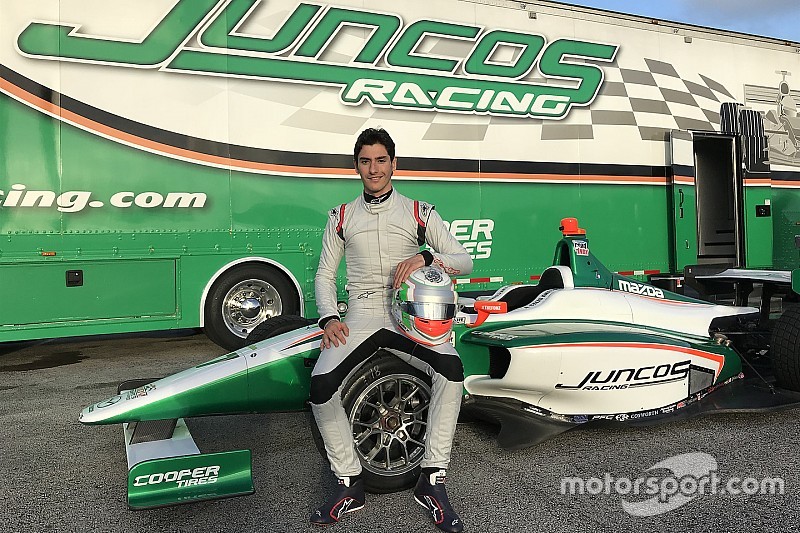 Alfonso Celis Jr., who has joined Juncos Racing’s Indy Lights team for 2018, says he had options in IndyCar but has chosen to take a patient approach to his career.

Celis scored a win and six other podiums in World Series Formula V8 3.5 last season on his way to third in the championship, driving for Fortec Motorsports. The Mexican also served as Force India’s Formula 1 reserve driver for the past two years.

He told Motorsport.com: "I am very excited to start this new adventure. I feel at home since Juncos Racing is a Latin team.

“It will be the first time that I compete on ovals, and there is a lot to learn. For example, I did not know that each tire had a different measurement. There are many things that I now have to get used to.”

Celis, who took part in nine Friday morning sessions for Force India, said: “There were options in IndyCar, but it was a decision that we took with patience and I think [entering Indy Lights] is the right thing to do.

“I come here to fight for the best results, but I must also have my feet on the ground and recognize that there is a long way to go. There is an adaptation process that I must go through."

Despite experiencing the workings of a Formula 1 squad, Celis praised the quality of the Juncos operation, which this year has expanded to run an eight-race campaign in IndyCar.

"I came to a professional team,” said Celis. “I was impressed when I arrived at the workshop, it is comparable to the level of any Formula 1 workshop. The team is here to win just like me; very professional.

“In addition to this, there is a Latin atmosphere and that makes understanding easier. "

Explaining his latest career choice, Celis stated: “The last years with Force India were a lot of learning, a lot of sacrifice and I think I matured a lot as a pilot and a human being. My last day of testing with them, in the Pirelli test after the Grand Prix of Mexico, I achieved times similar to those of the official drivers, which leaves me happy.

"[But] there were no options to have an official seat in Formula 1 because everyone is busy, and while we could continue in a similar position, it was not what I wanted.

"Formula 1 is not something I discard, but at this moment I want to race. There was no point in making Formula 2 after being in the top three in the World Series, so I think this is the best way.”