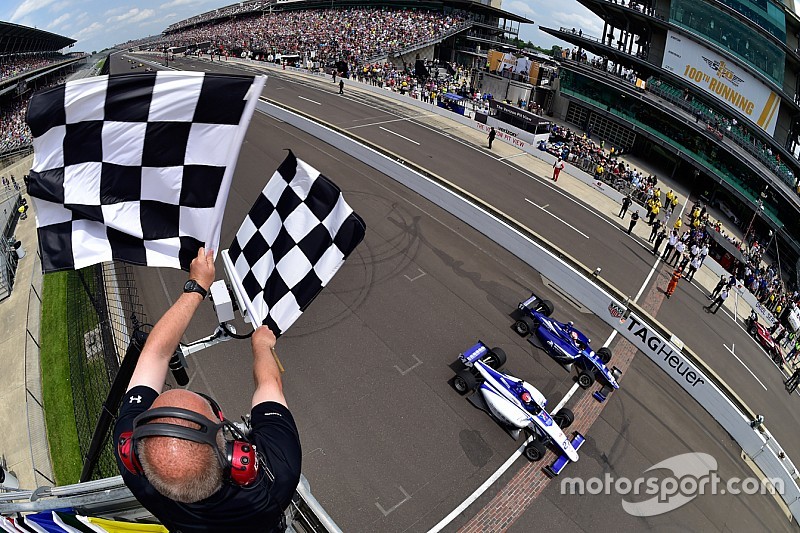 In a thrilling one-lap shootout, Dean Stoneman has swept the Indy Lights races at IMS, winning both the GP and now the 40-lapper on the oval.

After having the start waved off for a couple laps, the race finally got underway with Ed Jones in control. But at the conclusion of the first lap, Kyle Kaiser caught the wall out of Turn 4 while running fifth, putting the field back behind the pace car.

"I'm massively disappointed right now. The car got loose and I overcorrected," said Kaiser after being released from the care center.

Jones and Stoneman traded the lead back-and-forth throughout the race. RC Enerson also challenged before being forced to pit road after contact with Zach Veach.

With 12 laps remaining, Santiago Urrutia spun, but avoiding hitting anything. That did bring out the caution though, and the race restarted with eight to go.

With five to go, the yellow was needed once again. This time for Heamin Choi, who slid sideways after slight contact with the outside wall.

The cleanup allowed just one green-flag lap to settle it.  Juan Piedrahita was directly behind Stoneman, but had trouble at the start and fell back to eighth. Jones moved into the race lead and protected the bottom. Stoneman then jumped to the outside and from that point on, it was a drag-race to the stripe.

At the line, they were separated by just 0.0024 seconds with Stoneman just barely ahead -- The closest in history. Dalton Kellett finished third, Shelby Blackstock fourth and Scott Hargrove fifth.

"It was an amazing race ... I knew where I could position my car and finish the race in the lead," said Stoneman.

"It's so frustrating to lose a race like that," said Jones, who maintains his lead in the championship standings. Stoneman is now second, 29 points back.