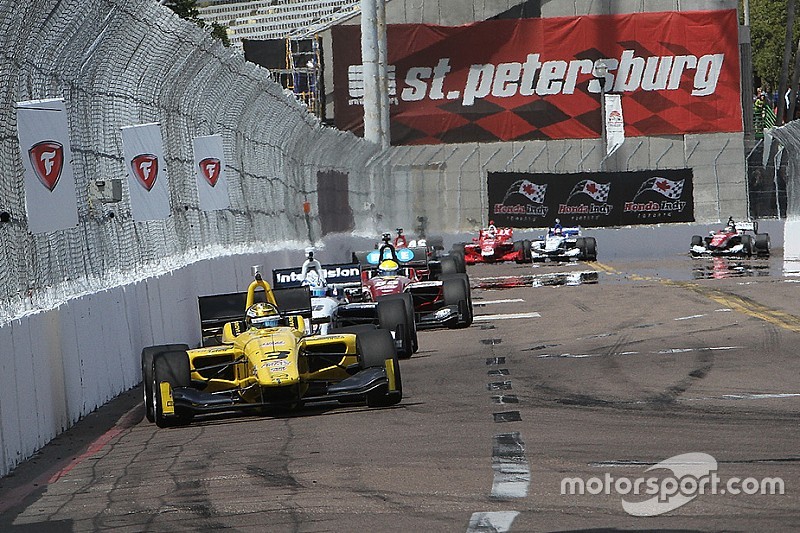 The Mazda Road To Indy continues to provide a solid foundation for aspiring Verizon IndyCar Series drivers. For fans, too, there should be plenty of action, intrigue and nuances to watch in all three series.

This weekend IndyCar’s Grand Prix of St. Petersburg will feature two races each for the open-wheel ladder series and it should be watched carefully. Despite being a street course, the St. Pete track has traditionally provided good pointers to form for road courses, too.

Khorounzhiy says… If experience was as big a factor in Lights as it is in many other junior open-wheel categories, the 2017 the Indy Lights entrylist would be setting the scene for a duel between Santiago Urrutia, who came up a couple of points short of champion Ed Jones last year, and Kyle Kaiser, who was best of the rest.

Both of them should certainly feature up front. Kaiser is heading into a third straight season with Juncos' IL15, while Urrutia shouldn't have too tough a time adapting to a move from the outgoing Schmidt Peterson Motorsports team to Belardi. Still, if recent Lights history is anything to go by, the title contest won't be limited to the obvious favorites.

The big question mark is how this year's crop of rookies will fare in Lights. Much attention will be on Pro Mazda champion Aaron Telitz in a second Belardi car, given that three of his five most recent predecessors went on to win Lights as rookies. But his former Pro Mazda teammate Patricio O'Ward (if he gets a full season) and Nico Jamin are capable, too – as are Europe converts Colton Herta and Matheus Leist.

Besides Kaiser and Urrutia, the big name among the returnees is probably Shelby Blackstock, who now has to aim to become a frontrunner in a third Belardi entry after two tough campaigns at Andretti.

Gruz says… Opportunities to graduate to IndyCar might be scarce, but the field of Indy Lights has changed significantly over the off-season. While none of the new names are as high-profile as 2016’s class that included European F3 champion Felix Rosenqvist or Formula Renault 3.5 star Dean Stoneman, Urrutia’s two years on the Mazda Road To Indy show you don’t need to be well-known to do well. Speaking of the Uruguayan, missing out on the 2016 title and budget limitations put his future in the series at risk, but with a seat at Belardi Auto Racing now secured, he will start the season as title favorite, even though Kyle Kaiser, who scored just 27 fewer points in 2016, will return as well.

The likes of Neil Alberico or Shelby Blackstock could feature more regularly at the front than before, but the more interesting question is who of the many promising rookies will be the best. Two drivers arrived from Europe, Colton Herta and Matheus Leist, both having successful campaigns in F3-level championships. Consequently, the Indy Lights car will be a step up for them, an extra burden to the usual difficulties for a rookie coming from Europe. In addition, last year’s top Pro Mazda drivers Aaron Telitz, Nico Jamin and Pato O’Ward will all race in Indy Lights, although the latter is currently signed only for the season opener.

Malsher says… Without wishing to sound wise only after an event, the Indy Lights roadcourse test at Homestead Miami ended pretty much as I’d expect – Herta, Jamin, Kaiser, Urrutia were the top four, and I don’t see a champion outside of this quartet.

For one thing, SPM has gone, sadly. Secondly, reigning champions Carlin don’t seem to have a strong driver lineup overall. Although Leist is obviously high-quality, the other three have question marks over them – for now, at least. This provides ample chance for Andretti Autosport (Andretti Steinbrenner Racing in Herta’s case) to come to the fore after a bad start to its relationship with the Dallara IL15, something it only started to remedy last season. The prodigiously talented Dean Stoneman was fast on occasion but there were definitely weekends when he was carrying the car, and several days when that wasn’t enough. Expect Herta and Jamin to exploit the team’s off-season progress.

Kaiser is solid, experienced and largely mistake-free, while Urrutia will be a firebrand for Belardi, but may not take kindly to teammate Pro Mazda champ Telitz matching him. Each will be a decent gauge of the other. As for Team Pelfrey, I hope to see them become prominent at this level, and O'Ward may be a big help in that regard, but the team – and teammate Juan Piedrahita – need him to stay on board for the whole season.

Gruz says… With a new car scheduled for 2018 and the series struggling to have a sizeable grid last year, projections for the 2017 Pro Mazda season did not look particularly promising. Pretty much everyone from last year left, yet the size of the field has remained about the same, and a couple of good drivers have signed up.

Reigning USF2000 champion Anthony Martin used his prize money and made the obvious step up. Despite a rookie in the one-man team of Cape Motorsport, Martin is the favorite. Last year’s dominant team Pelfrey fields three drivers including Martin’s 2016 teammate Nikita Lastochkin, the only sophomore driver TJ Fischer and Brazilian newcomer Carlos Cunha. All three are good enough names not to be instantly discarded but, considering how well former USF2000 champions have transitioned to Pro Mazda in the past, Martin should have no issues at all. The 2017 field also has World Speed Motorsports fielding two promising but seriously inexperienced drivers in karting graduate Sting Ray Robb and F1600 convert Philippe Denes.

Khorounzhiy says… Pro Mazda's 2017 season might currently feel like a gap year before the new car's arrival, but the prize is the same – the funding for a Lights move – and thus intrigue is not absent.

On track record, Anthony Martin is the name that sticks out, the Aussie arriving on the heels of two thoroughly strong campaigns in USF2000. But Martin's Cape team has yet to win the PMazda crown in its three years in the series so far, and was clearly outperformed by the dominant Pelfrey outfit last year.

For Pelfrey, the question will be whether returnee TJ Fischer can make a big enough step from 2016 – and whether newcomers Nikita Lastochkin and Carlos Cunha can produce an immediate impact. The times from testing have looked encouraging enough for all three, but denying Martin the crown is guaranteed to be quite the challenge all the same.

There's also a wild card factor in Victor Franzoni, who secured a drive with the very capable Juncos team. The Brazilian was a proven quantity on the USF2000 scene and already has some experience in the current Pro Mazda car.

Malsher says… Andersen Promotions and Mazda made a huge effort of trying to entice newcomers and persuade established teams to stay in this series in its final year before the sexy Tatuus PM-18 Mazda’s arrival. And so, having once looked set to become the embodiment of the theory that it takes only two cars to make a race, Pro Mazda is suddenly looking healthier. Some 14 cars are set to appear this season, despite just seven hitting the track in Spring Training.

Juncos Racing has announced a two-car team despite teamowner Ricardo Juncos announcing earlier that the Pro Mazda arm of his team is on ice while he focuses on his Indy 500 effort for 2017 and full IndyCar Series campaign for ’18… One of those two drivers is without doubt someone to watch – Victor Franzoni, who was beaten only by Cape Motorsports in USF2000 last year.

Given that this combo of talents wasn’t assembled in time for Spring Training, however, I’d say that initially what we’ll have in 2017 is a repeat of 2016 – Team Pelfrey versus Cape’s leading runner. The interest lies in whether there can be a twist in the tale. Last season, Pelfrey’s Telitz and O’Ward often had any given Pro Mazda race to themselves, because putting two of the best drivers in the two best cars will do that to a results sheet. Nico Jamin in Cape Motorsports’ entry was usually best of the rest, and at Mid-Ohio was best of the best.

However, Pelfrey’s 2017 trio of TJ Fischer, Nikita Lastochkin and Carlos Cunha have yet to prove they’re at Telitz/O’Ward level, which surely leaves a door open for Cape’s Jamin replacement, USF2000 champion, Anthony Martin. But I’m now thinking the Franzoni Factor may come into play sooner than many expect…

Khorounzhiy says… USF2000's first year with the Tatuus USF-17 Mazda has the makings of a free-for-all, with established frontrunners set to go up against highly-rated newcomers making up a bumper grid of new cars.

Admittedly, the Spring Training at Homestead left a rather different impression as Mazda scholarship shoot-out winner Oliver Askew lapped four tenths clear of anybody. He’s clearly a threat, and Cape's recent USF2000 record is sublime, but you'd expect his more experienced rivals to step up as the season kicks off proper.

Certainly, if newcomers Exclusive Autosport get up to speed quickly, it's hard to look past last year's runner-up Parker Thompson, and Luke Gabin, another established US2000 frontrunner, has to be a factor as well.

Returnees Robert Megennis and Ayla Agren should ensure a strong effort from Pelfrey, although it was their rookie teammate Kaylen Frederick who led the team at Homestead.

Gruz says… Just like with Indy Lights a couple of years ago, bringing in a new car has reinvigorated USF2000, and the 2017 season sees several new teams as well as promising youngsters enter the field. Rinus VeeKay (officially Van Kalmthout) follows in the footsteps of Parker Thompson by ending an internationally successful karting career to join MRTI. Alongside the Dutchman, Oliver Askew, winner of the first edition of the Mazda Road To Indy Shootout, Kyle Kirkwood, winner of multiple local karting championships, and Calvin Ming, a F1600 frontrunner last year, are all to be followed closely. However, I expect the title fight will be among several 2016 drivers who decided against stepping up to Pro Mazda. The obvious favorite is Thompson, who was nearly champion last year. Luke Gabin returns for a third campaign while 17-year-old Robert Megennis, Dakota Dickerson or Ayla Agren can all be expected at the front more often than not.

Malsher says… I see Askew, VeeKay and Thompson as obvious title contenders, but I’d like to move Megennis into that elite mix. To this day, we don’t know whether the Pelfrey driver underperformed in qualifying last year which served to highlight his progress in races, or whether he’s just exceptional in car-to-car combat, as per his heroes Lewis Hamilton and Nigel Mansell. All we can tell so far is that he’s aggressive, daring and fun to watch, and I expect Pelfrey to be as adept as Cape at figuring out the new Tatuus chassis.

Unlike my colleagues, however, I think the new car erodes the benefit of experience in USF2000, so I’m fully expecting the best rookies to contend for the title with the best of the vets, which include Gabin, Kohl and of course, Thompson.