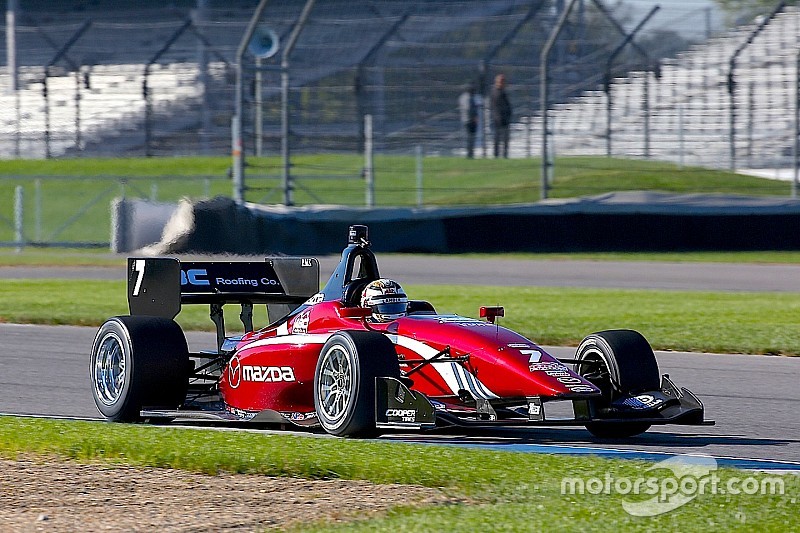 In Indy Lights, Garett Grist claimed top honors for SPM after turning a lap of 1min14.7396sec (117.480 mph) – less than a tenth away from the track record set by series champion Ed Jones in May. Grist, who completed a partial season of Lights in 2016 with Pelfrey, after graduating mid-season from Pro Mazda, was mere hundredths of a second ahead of Nico Jamin piloting an Andretti Autosport machine.

Grist, who was only in action today, said: “I really wasn’t planning on testing this weekend [but] it’s great to work with the guys here at Schmidt Peterson. It’s been a great day learning the car and I got along well with everyone, especially my engineer, so it’s definitely all pluses.”

Jamin stated: “The test went very, very well. I couldn’t expect anything better from these two days of testing. I adapted myself really fast to the car even though the first two or three laps were absolutely crazy. The car was way too fast but then I got used to it and I really learned how to drive the car and took my time. When I thought I was ready, I really went for it and topped sessions over the two days.

“The team did a great job and I am very happy. The car really suits my driving style. Everything I do seems to work with this car so I’m on a little cloud right now.”

Victor Franzoni continued to dominate Pro Mazda testing, fastest in every session for Juncos Racing and the Brazilian unofficially bettered the existing lap record of with a best of 1:22.6179 (106.277mph) this afternoon. Teammate Jorge Cevallos emerged second fastest ahead of Team Pelfrey’s TJ Fischer.

“I am really happy because I am driving in Pro Mazda and it’s a great car,” said Franzoni. “It was even better with Juncos Racing. They gave me a car that was really fast from the first session. We were just changing things a little to make the car better for me. It was perfect. All the team is really nice, I learned a lot of things and I hope next season I can race with them.”

The new Tatuus USF-17 USF2000 saw the top 10 drivers covered by just 0.8sec during the final session, and it was Neil Verhagen in the Pabst Racing machine who emerged top with a 1min24.8661sec lap around the 2.439-mile IMS road course. That meant the sensational 15-year-old from Mooresville, N.C., was 1.1sec under the track record set by series champion Anthony Martin in the old Van Diemen chassis back in May.

It also put him just under 0.1sec quicker than 2012 champion Matthew Brabham, who continued to test for Cape Motorsports with Wayne Taylor Racing.

Said Verhagen: “I loved the car, the track and how everything was working for me. As we progressed learning the car more and figuring out the setup and my driving as well, we developed the car and went faster and faster every session. Capping my day off with P1, I couldn’t be happier. The Mazda Road to Indy is just phenomenal.”