Fontana, Calif. - Sarah Fisher Hartman Racing (SFHR) development driver Kyle O'Gara will jump back into a Firestone Indy Lights car for the second time in 2013 on Oct. 19 for the Lefty's Kids Club 100 at Auto Club Speedway.

The 18-year-old Roncalli High school graduate will race in the Firestone Indy Lights season finale through a partnership between SFH Racing Development and Schmidt Peterson Motorsports (SPM). O'Gara's No. 67 entry will be sponsored by SFHR co-owner Wink Hartman and Hartman Oil. 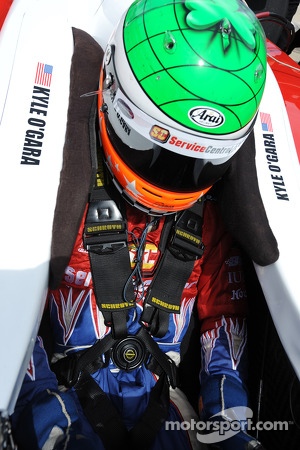 "I'm very excited to be back behind the wheel of an (Indy) Lights car this week," O'Gara said. "I can't thank everyone at SPM and SFHR enough for all of their help. I'm very thankful for Wink and Libba (Hartman), because without them this wouldn't be possible."

O'Gara made his Indy Lights racing debut at the Freedom 100 in May, but was knocked out of the race after an early incident at the iconic Indianapolis Motor Speedway.

"Indy didn't turn out the way we wanted it to, but we are really looking forward to having a good result in California," O'Gara said.

"As Sarah Fisher Hartman Racing grows, we always look for the opportunity to support the development of our drivers and team members," Wink Hartman said. "Kyle O'Gara is an important part of our team culture and has contributed greatly to our success on and off of the track. SFHR is excited for Kyle to be a part of the Indy Lights race at Auto Club Speedway on Oct. 19th."

"I'm very pleased to have Kyle back in the SPM car for Fontana," Sam Schmidt, co-owner of SPM said. "He showed excellent speed and maturity at Indy in May, but we didn't translate that into representative results. I appreciate the efforts of everyone involved that enabled him to get a second chance."

Zach Veach accelerates to season finish on the streets of Houston