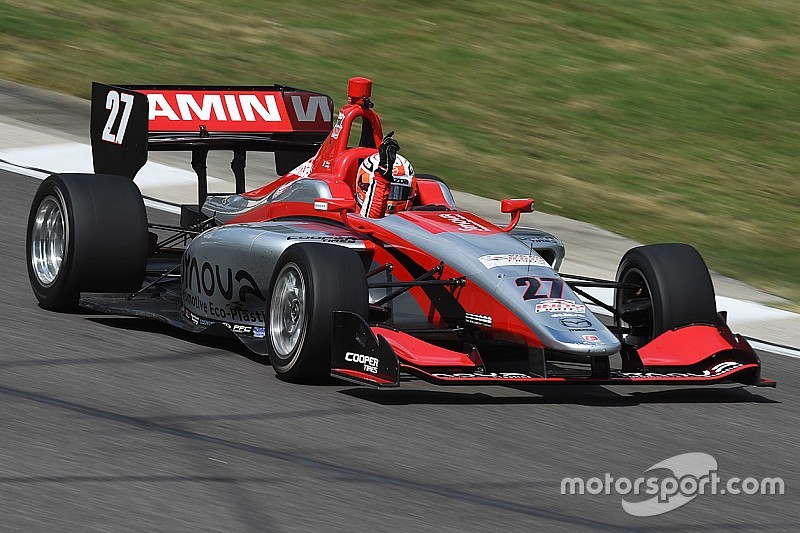 Nico Jamin put himself firmly into the Indy Lights championship hunt with a lights-to-flag victory on the IMS road course.

The Andretti Autosport driver avoided getting drafted at the start of the race, and held off strong challenges from fast-starting teammate Colton Herta and Juncos Racing’s Kyle Kaiser.

Then, in the closing stages of the race, Jamin did just enough to keep clear of the charging Carlin Racing entry of Zachary Claman De Melo, who scored his first podium of his Lights career.

Herta’s demise was caused when he ran off the road at Turns 10 and 11. Initially he lost only two places but as he started lapping some 2sec off the pace, he was forced to pit for new tires with a right-rear puncture. The Andretti Steinbrenner Racing ace would be classified 12th.

That should have left Kaiser sitting pretty for runner-up position, but Claman De Melo chased him hard, and having drafted past him around the outside on the front straight and then brutally chopped him off, the Canadian edged away and started challenging Jamin.

Still, Kaiser racked up his third straight podium, which means he and Jamin now share second place in the title standings, just three points behind Herta.

Neil Alberico brought the second Carlin car home fourth, and his other teammate, Matheus Leist, looked more comfortable than he has for some time, setting fastest laps in the closing stages and claiming fifth place, albeit four seconds behind Alberico.

Aaron Telitz was another driver who made a strong start for Belardi Autosport, but had nothing for the guys in front, and had to settle for sixth, just one second ahead of teammate Santi Urrutia.

Juan Piedrahita was unable to start, following his shunt in practice.