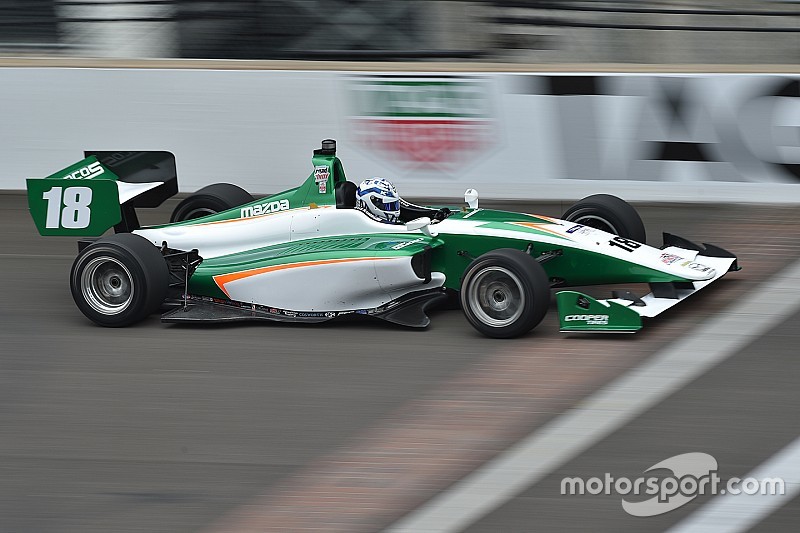 Juncos Racing’s Kyle Kaiser held off a strong challenge from Santiago Urrutia near the start of Indy Lights' second race of the weekend race to score his first win of the season and take the lead in the championship.

Polesitter Kyle Kaiser’s Juncos Racing machine held the lead into Turn 1 of the IMS road course, but Santiago Urrutia’s Belardi Autosport car went down the inside of Colton Herta’s Andretti Steinbrenner Racing entry into Turn 1, and then round the outside of him at Turn 2. Colton, offline, had to also give up third to Carlin Racing’s Matheus Leist.

At the start of lap 2, Urrutia tried to get around the outside of Kaiser to grab the lead but although they banged wheels at Turn 1, the Uruguayan couldn’t make it stick. The following lap he tried to get the job done down the inside but this time he skated wide, and his lost momentum meant that along the back straight, Leist demoted him to third.

This order at the front remained static for the next several laps, but Kaiser was starting to escape and by Lap 10 he had a 2.3sec lead. Urrutia then closed on Leist to try and reclaim second place, and he achieved it on Lap 11 at Turn 10.

Not far behind, Jamin was having to take defensive lines to hold off the feistily-driven Carlin car of Alberico, but again at Turn 10, the change occurred, so that the order was now Kaiser, Urrutia (3.6sec behind), Leist, Herta, Alberico, Jamin. Piedrahita was still seventh and within one second of the Andretti machine.

Alberico spent several laps trying to separate Herta from fourth place but the Andretti driver always seemed too good at placing his car defensively and also choosing where to draw out an advantage whenever Alberico got too close.

Finally Alberico got the job done on Lap 20, and a slight off-course moment from Herta also allowed Jamin and Piedrahita through. Herta started falling back thereafter, dropping behind the seemingly race-long battle between Zachary Claman De Melo of Carlin, Nicolas Dapero (Juncos) and the Andretti machine of Dalton Kellett.

Up front, having let the lead reach 4.5sec, Urrutia started carving little chunks out of Kaiser’s advantage from Lap 18, but the Juncos driver was equal to the challenge and responded by laying down his fastest laps of the race. By lap 25, the lead was back out to 4.5sec.

As Leist slipped 4sec behind Urrutia, his third place came under threat from Alberico in the closing stages, and the pair were running as one by Lap 30, with Leist making little errors under pressure, like locking tires in the twisty infield toward the end of the lap, and understeering wide at Turn 1.

However, Alberico’s challenge ended as he braked extra-hard at Turn 1 on Lap 34 and hit the curbs, having not gone far enough down the inside of Leist, and not wishing to impale his teammate’s sidepod. Over the remaining two laps Alberico fell back to sixth with a broken front wing.

Kaiser eventually won by 6.5sec, Urrutia was a similar distance ahead of Leist, with Jamin and Piedrahita completing the top five.

Behind Alberico, Andretti Autosport’s Ryan Norman took seventh after by far his most competitive showing of the season, with Dapero, Kellett and a disappointed Herta eventually getting the better of Claman de Melo to fill out the Top 10.