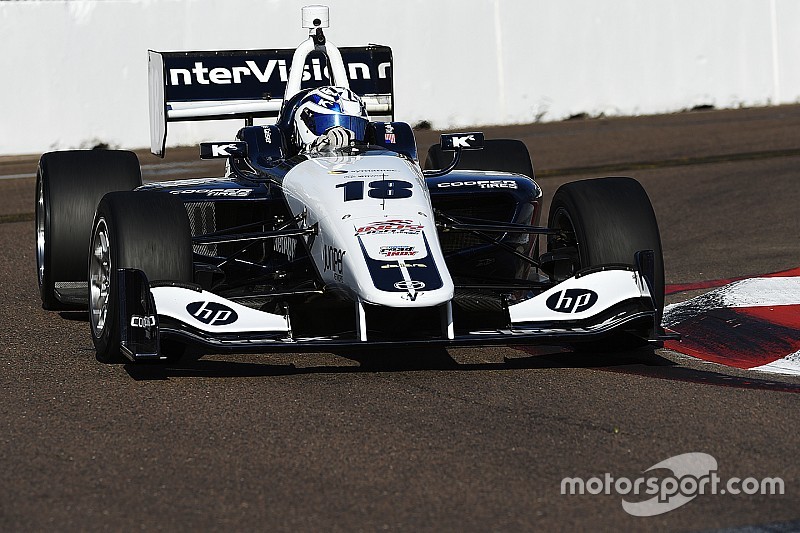 Kaiser, who drives for the Juncos team that took Spencer Pigot to last year's title, was less than a tenth up on Rosenqvist when the session ended early due to a red flag.

"We spent a lot of time doing long runs yesterday, and we really hit the nail on the head, it was the perfect setup," Kaiser said after the pole run. "It came together really well. It’s a shame it went red at the end there.

“I’ve learned from Spencer from last year, so playing it smart is the way to take this championship."

Early on, Schmidt Peterson rookies Santiago Urrutia and Andre Negrao were the first two drivers to dip into the 1m16s, surpassing the practice benchmark set by Rosenqvist.

However, times continued to trickle down rapidly and, at the halfway point, Rosenqvist was back into the top spot, narrowly heading his Belardi teammate Zach Veach.

A couple of minutes later it was Kaiser's turn to shine, the American establishing a gap of four tenths out front with a 1m05.829s.

With three minutes to go, Rosenqvist moved to within four hundredths of the American - but he would not get another shot at debut pole, with the red flag coming out almost immediately.

The cause was fellow newcomer Dean Stoneman, who was sitting 13th when he went into the tire barrier

As such, the session was called, with Kaiser handed his first pole in Lights. Rosenqvist took second ahead of Veach and Shelby Blackstock, who severely damaged his front wing after setting his best time.

"I think we’ve done a really good job so far, I’m not going to get too excited yet."

Ed Jones, who won both races at St. Pete last year, was only 12th.