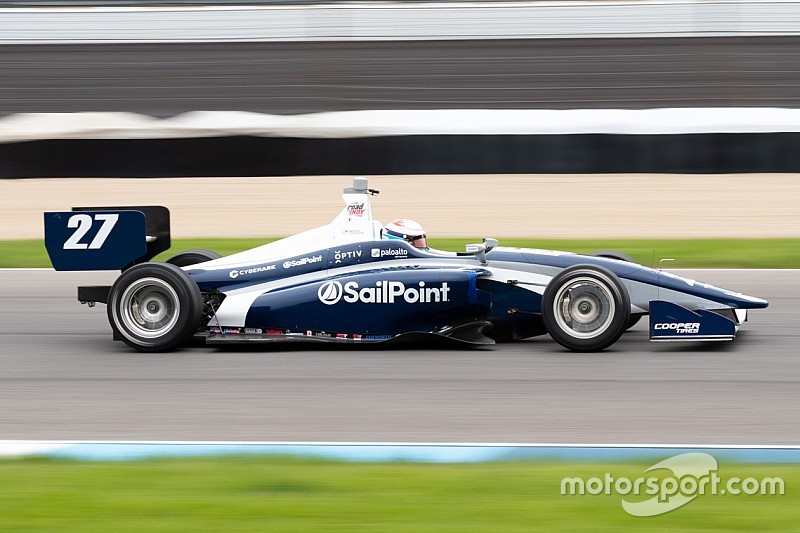 The Road To Indy races on the Indianapolis Motor Speedway road course saw Robert Megennis and Rinus VeeKay share the Indy Lights wins, while Rasmus Lindh swept both Indy Pro 2000 races, and Braden Eves did the same in USF2000.

In Race 1, after exchanging positions at the end of the pit straight on Laps 2 and 3, polesitter Robert Megennis and Andretti Autosport teammate Oliver Askew firmly established themselves in that order. Megennis then started edging clear, getting the lead up to 2.4sec, as Askew simultaneously pulled two seconds on Juncos Racing’s Rinus VeeKay.

The Dutchman had started second, fell back, but had then prevailed in an exciting side-by-side duel with the third Andretti machine of Ryan Norman to reclaim a spot on the podium. BN Racing’s David Malukas had also taken advantage of Norman’s lost momentum to grab fourth, but Norman moved back ahead on Lap 16 of the 30-lap race.

Megennis let his lead dwindle to under 2sec in the closing stages but easily scored his first Lights win, with VeeKay four seconds behind Askew and 2.3sec ahead of Norman. Zachary Claman’s Belardi Auto Racing was 16sec from P1 at the drop of the checkered flag, with Malukas sixth ahead of Toby Sowery, Dalton Kellett and Lucas Kohl.

An overnight setup rethink by Juncos paid off on Saturday, with VeeKay claiming pole, holding off Megennis on the opening lap of Race 2 and then romping home to an unchallenged victory.

Megennis, meanwhile, outbraked himself at Turn 7 on the first lap while considering an outside pass on his rival, drifted onto the grass and had to stage a comeback drive. He got as far as fourth, threatening Askew, who had nothing to threaten either VeeKay nor Claman who had started sixth but passed all the Andretti cars in the opening few corners. When Megennis tried to pass Askew down the front straight, his teammate moved to block him so was then ordered by Race Control to relinquish third place. Askew obeyed – but on the following lap he retook Megennis to come home third, 10sec behind the winner, 3.5 behind Claman.

In Race 1, reigning USF2000 champion Kyle Kirkwood of RP Motorsports, was told to drop to the back of the 14-car pack after jumping the start ahead of Juncos Racing’s polesitter, Rasmus Lindh and leaving Phillippe Denes of Fatboy Racing and Danial Frost of Exclusive Autosport with a run at Lindh.

Kirkwood was back up to sixth at the end of the first racing lap, however, aided by five cars – including Denes – taking to the escape road at Turn 1. Kirkwood was fourth next time by, having passed Abel Motorsports’ Parker Thompson (who had jumped up from 12th) and Sting Ray Robb (Juncos). On the following lap Kirkwood was third, after getting around Nikita Lastochkin in a second Exclusive car, but Frost remained three seconds in front of Kirkwood, and Lindh’s lead was 1.4sec.

Frost started chipping at Lindh’s advantage from Lap 7, as Kirkwood edged a little closer to both of them, but the actual order change came on Lap 10, with Robb passing Thompson for fifth to start pressuring Lastochkin. That paid off the following lap, and both he and Thompson got around the Russian.

Frost was within half a second of Lindh at the start of Lap 14 with Kirkwood only 1.7sec in arrears, but Lindh extended his advantage by a couple of tenths next time by and suddenly it was Kirkwood on the move, lapping half a second faster than Frost on Lap 15 so that the top three were equi-distant, 0.9sec apart.

At the start of Lap 20, Frost was forced to protect the inside line from Kirkwood down into Turn 1, but Kirkwood muscled by through the T2/3 sequence. However, the time lost during the battle left Lindh with a 2.4sec lead with five laps to go, and that was a step too far. Lindh was 1.2sec ahead at the start of the final lap and won by 0.88sec, with Frost 2.3sec behind Kirkwood but 13sec ahead of Robb, and 16sec ahead of points leader Thompson. Jacob Abel in the second Abel car was sixth, drafting past Lastochkin by 0.035sec between the final turn and the finish line.

Lindt would lead all 25 laps in Race 2 and with Thompson again only finishing fifth, the Swede moved ahead in the points race. Kirkwood, who appeared to be a threat for the lead at Lap 1/Turn 1, then tried instead to tuck in behind Lindt but had his wing taken off by Robb who would go on to finish second, just two seconds behind Lindt and only 0.7sec clear of Frost.

Lastochkin had nothing for this trio, finishing 16sec in arrears, but was nine seconds clear of Thompson. Following repairs, Kirkwood returned to the fray one lap down, able only to salvage a point for fastest lap, as well as 14th place.

Polesitter Braden Eves of Cape Motorsports made a clean start in Race 1 and was unthreatened into Turn 1, but teammate and fellow front-row starter Darren Keane was tipped into a spin, allowing Pabst Racing’s Hunter McElrea and DE Force Racing’s Manuel Sulaiman into second and third. Cameron Shields in the Newman Wachs Racing machine was up to fifth from 13th on the grid and grabbed fourth from Jack W Miller on the second lap.

Eves and McElrea pulled clear of their opposition, and on Lap 8, McElrea grabbed the lead and headed Eves across the yard of bricks by half a second. However, that was as big as McElrea’s lead got, and Eves slipped back through on the penultimate tour of the 15-lap event.

They crossed the line just 0.3sec apart, and less than a second ahead of the impressive Sulaiman. The young Mexican pulled 3sec clear of the second Pabst machine drive by Colin Kaminsky who edged ahead of Cameron Shields in the closing stages.

Arguably the most impressive drive came from Darren Keane who stormed from the back of the pack into sixth, aided in his quest by the demise of Eduardo Barrichello who had to pit with one lap to go.

Eves converted his pole for Race 2 into another win, this time without relinquishing it, despite having to survive three restarts. Keane’s misfortunes ended at last with second place ahead of McElrea, after repassing the Pabst car on the second restart, closing to within 0.6sec of Eves at the checkered flag and keeping McElrea just a quarter second behind.

When Sulaiman suffered gearchange issues, he was passed by teammate Crawford who went on to claim fourth ahead of Barrichello, as Sulaiman suffered two incidents and had to retire. So too did Shields and Miller, after initially looking like top-five contenders.