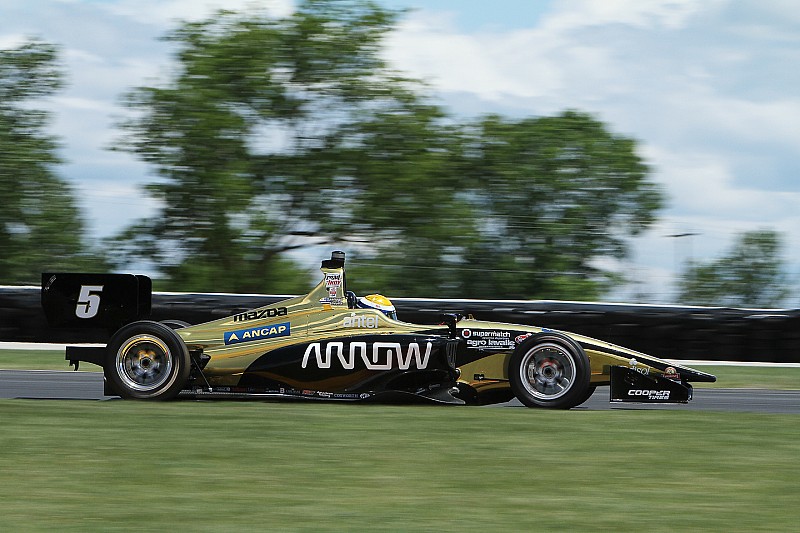 After starting on pole three times in his 2016 Indy Lights rookie season, the 20 year-old Uruguayan will start on pole for the first time in 2017.

Urrutia will be joined on the front row by Colton Herta, with Nico Jamin, and Shelby Blackstock starting behind them on the second row.

Championship leader Kyle Kaiser starts will row off in sixth, only the third time all year, he won’t take the green flag from one of the top two rows.

The first half of the 30-minute qualifying session saw the red flag fly on two different occasions. The first time was for Dalton Kellett in Turn 2 and the second time was for Garth Rickards in Turn 11. Both drivers were able to get re-started by the Holmatro Safety Team and continue with qualifying.

After all the teams and drivers made a trip to pit road for fresh Cooper Tire slicks, Herta briefly held the provisional pole, but it wasn’t long before a familiar name that was back in charge. Urrutia continued to get quicker as the session wore on, and his quickest lap of 71.369 seconds was a vast six tenths of a second ahead of Herta.

Team Pelfrey veteran Juan Piedrahita brought out the third red-flag of the session when had an incident at the exit of the The Keyhole (Turn 2).

The track went back to green with just over a minute remaining, and the drivers were all able to get in one more flying lap, but none of them were able to improve their lap times.