The stars of the Mazda Road to Indy series took to NOLA for a preseason test this past weekend.

The start of the 2014 racing calendar usually involves numerous test sessions to get rid of the offseason cobwebs, and such was the case at NOLA Motorsports Park.

The Indy Lights series had four test sessions over the course of two days at the Avondale, LA track with Gabby Chaves leading the way with a quick time of 1:27.612 seconds, averaging just a tick under 113 mph. Chaves was happy with his results and is hoping for more in 2014, as he stated his goals for a successful 2014 season: 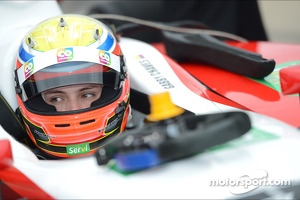 The test also gave teams a chance to test their new drivers for 2014. Such was the case with Lloyd Read, driving for Bryan Herta Autosport partnered with Jeffrey Mark Motorsport.

Read got his seat with BHA after a successful test, as he explains,

“We set up a test at Putnam Park, a one day test and it went really well, we had a target time I had to make, we hit that target time and a little bit more.”

“We’ve got new dampers on the car, […] so we’re trying to figure out the tires and the dampers at the same time. It’s a little tricky but we’re making progress.”

Second fastest was Matthew Brabham for Andretti Autosport at 1:27.760 around the 2.75 mile track.

The Pro Mazda portion of the weekend involved two races, with race 1 being won by Spencer Pigot for Juncos Racing. Shelby Blackstock was second for Andretti Autosport and Kyle Kasiser was third, also driving for Juncos Racing. 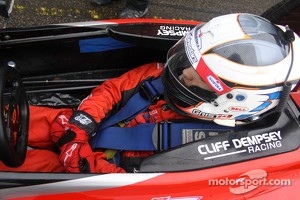 Grist was rookie of the year in 2013 for the USF2000 championship and won at Mid-Ohio, so he moved up to the Pro Mazda championship in 2014. He has high expectations for 2014.

The fastest Pro Mazda time of the weekend went to Pigot with a 1:32.061 lap in the second practice session.

USF2000 had three races during the course of the Winterfest, and all three were won by different drivers. 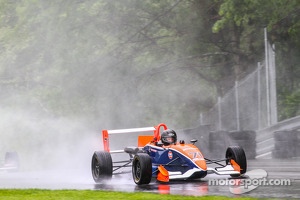 Race one was won by Victor Franzoni, driving for Afterburner Autosport. Second place was Henrik Furuseth for JAY Motorsports and third was RC Enerson, driving for Team E Racing.

Enerson followed up his third in race one with a victory in race two, while Franzoni finished second and Jake Eidson rounded out the podium driving for Cape Motorsports with Wayne Taylor Racing.

The comeback of the Winterfest belonged to Australian Scott Andrews. After being involved with an incident on the first lap of the first race, he came back to finish a strong fourth in the second and third race. He offered his take on what makes for a fast car around NOLA Motorsports Park,

“You really want stability and you want a car that comes off the corner really well,” Andrews said.

Andretti hopes Kirkwood can return to “the family” one day

Kirkwood now available to any team as he seeks fulltime ride