The Canadian took pole and led the race from start to finish, but came under immense pressure from BN Racing/Team Pelfrey’s rookie Toby Sowery in the closing stages, the pair crossing the line 0.7sec apart.

Around 3.5sec further back, Oliver Askew scored third place for Andretti Autosport on his series debut, after holding off BN Racing’s David Malukas in the early stages. Rinus VeeKay of Juncos Racing claimed fifth, a dozen seconds ahead of two more Anddretti cars, those of Robert Megennis and Ryan Norman.

In the second race, polesitter Askew was immediately challenged on the outside of Turn 1 by Rinus VeeKay, which put the Dutchman on the inside for Turn 2. However, VeeKay’s right-front made contact with Askew’s left-rear and sent him into the wall on the exit of the turn. Race Control decided no action against VeeKay was necessary.

VeeKay checked out on the restart leaving Megennis to try and fend off Claman DeMelo, Sowery and Malukas. However, after ZCDM got around him at Turn 2, Malukas and Sowery went either side of the Andretti machine into Turn 4, demoting Megennis to fifth.

Past the halfway mark, Sowery closed in on Malukas, grabbed third and closed in on Claman De Melo – a similar battle to the Saturday race, albeit with VeeKay more than six seconds ahead of them both.

With seven laps to go, Megennis then shunted by himself by understeering into the wall at the notorious Turn 10, wiping out everyone’s advantage as the full-course caution flew.

The restart saw no order changes, and although Claman De Melo closed in, VeeKay kept it all together to take the win. 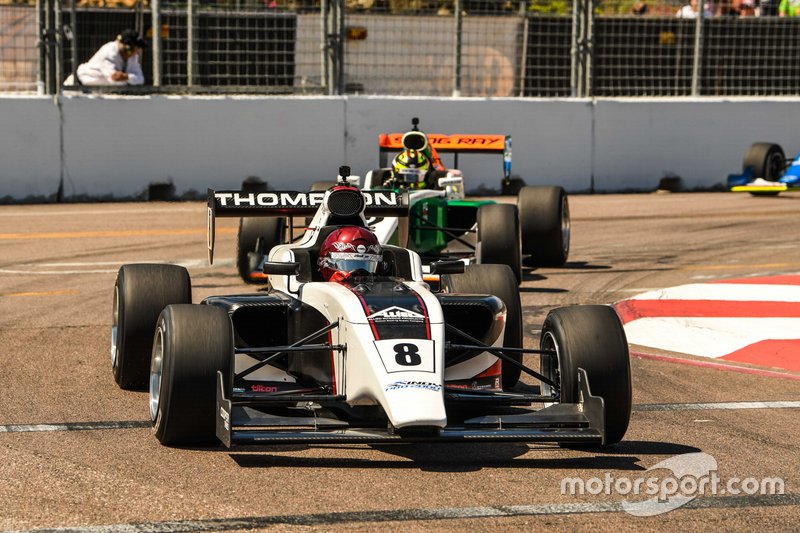 In Cooper Tires Indy Pro 2000, Parker Thompson did all he could to ensure he earns a full time ride in the series by winning both races at the weekend piloting the Abel Motorsports entry.

Thompson took pole for the first race, but took a cautious approach to Turn 1, allowing series rookie Rasmus Lindh to drive around the outside of him in the Juncos Racing machine to grab the lead.

When Kirkwood made further contact with Exclusive Autosport’s Parker Locke, he ended up stranded at Turn 3, bringing out a full-course caution.

Following the restart, Thompson tracked Lindh carefully and on Lap 15, he outbraked him for the lead at Turn 1, and then survived another restart to hold on and win. Behind Lindh, Robb equaled his best ever finish in the series formerly known as Pro Mazda, while Exclusive Autosport’s Danial Frost claimed fourth.

Thompson’s second win was even more straightforward, leading the race from start to finish, while Kirkwood made up for his Race 1 adventures by driving a composed race to second, setting fastest lap along the way.

Frost claimed his first podium after holding off the Juncos pair of Lindh and Robb. 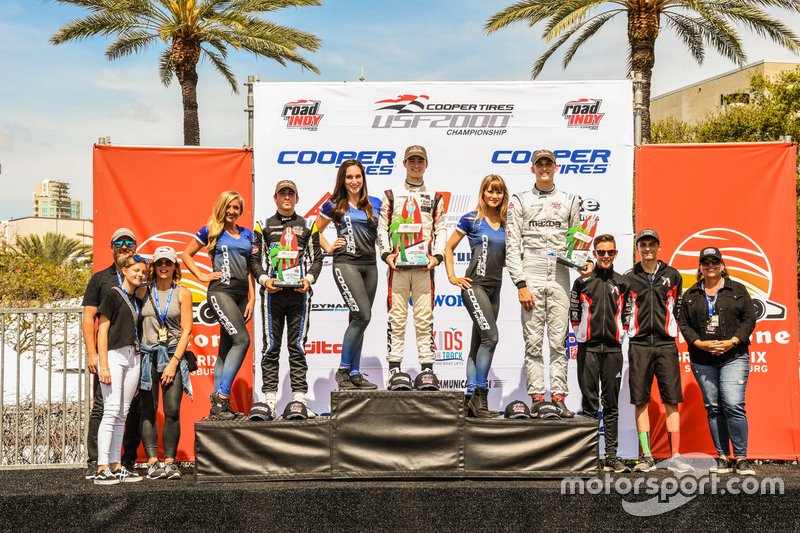 In Race 1, he kept well clear of some of the chaos behind him, particularly at the start when seventh-place starter Alex Baron launched his Legacy Autosport car over the rear wheels of another car and corkscrewed mid-air down the escape road. Thankfully the Frenchman was uninjured.

While the field was running under caution, Nate Aranda shunted his Team E-JAY car at Turn 14 and the race was red-flagged as he was extracted from the car and taken to hospital for precautionary X-rays.

At the restart, Eves held his advantage over DEForce Racing’s Manuel Sulaiman and was never seriously troubled thereafter. Hunter McElrea, who had lost time and places in avoiding Baron’s wrecking car, recovered to claim third for Pabst Racing.

Eves’ second victory was a gift, as Cape teammate Darren Keane dominated the event until the final turn, when under intense pressure from Christian Rasmussen of the Jay Howard Driver Development team, Keane lost it under braking.

Rasmussen had nowhere to go to avoid the broadside Cape machine, and so its sister car ducked by to claim an unlikely victory ahead of McElrea and BN Racing’s Zach Holden.