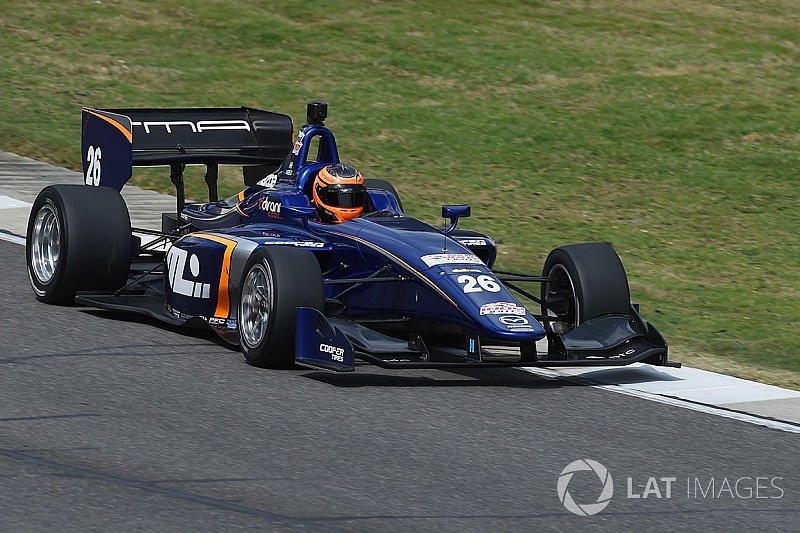 Leist’s fastest time in his Dallara IL15-Mazda came on his 10th lap, 1min53.176sec which equates to an average of 127.681mph around the 4.014-mile road course in Elkhart Lake. That was 0.205sec clear of Alberico, whose closest challenger was the fastest of the Andretti Autosport cars, driven by the increasingly impressive Ryan Norman.

Championship leader Kyle Kaiser of Juncos Racing was 0.45sec off the fastest time with Nico Jamin and Dalton Kellett fifth and sixth. The fourth Andretti car, the Andretti Steinbrenner Racing entry of Colton Herta, could manage only P13. Bryan Herta’s son missed the morning practice session altogether, and only got out on track this afternoon with 12mins remaining.

Shelby Blackstock was fastest of the Belardi Auto Racing drivers, chased by Juan Piedrahita in the top Pelfrey car.

If it was a glorious result for Carlin, their joy was tempered by Garth Rickards finishing 1.3sec off the pace in 12th, and mechanical issues preventing Zachary Claman De Melo from setting a lap time

Second qualifying starts at 7.50am local time tomorrow, with the two races being held on noon on Saturday and 8.45am on Sunday.

Alberico: The rising star who relearned his craft