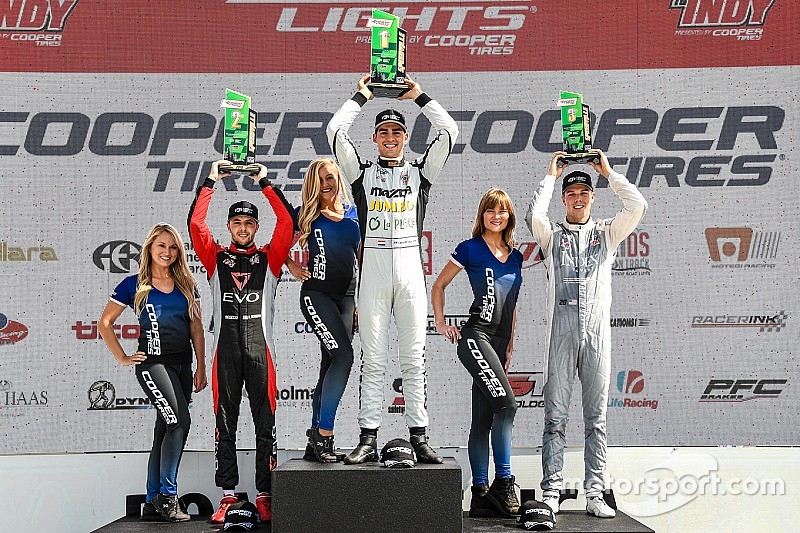 Ryan Norman produced the best race of his Indy Lights career to win on Saturday, while Rinus VeeKay was a dominant victor on Sunday, as Kyle Kirkwood swept Indy Pro 2000's double-header, and Hunter McElrea and Braden Eves shared the USF2000 spoils.

Race 1 started off as a real thriller. Juncos Racing’s Rinus VeeKay made a perfect start but Robert Megennis passed Andretti Autosport teammate Ryan Norman around the outside to grab second place. That became a battle for the lead when VeeKay ran wide at Turn 7 and then blocked Megennis as he rejoined the track, and so had to serve a drive-through penalty.

On Lap 2, Aaron Telitz in the Belardi Auto Racing machine took advantage of Megennis having to hold off first Toby Sowery’s BN Racing/Team Pelfrey car and then the recovering Norman to pass all three and grab the lead on his home track.

However, up the pitstraight next time by, Norman got ahead of Telitz and down to Turn 5 Sowery zapped past the Belardi car too.

While 1.6sec covered these three, Megennis was 1.9sec back but well clear of David Malukas (BN Racing) and the surprisingly off-the-pace Oliver Askew.

By Lap 8, Sowery had dropped off Norman’s tail, however, and Telitz drafted past up the front straight and was clear by the time they braked for Turn 1.

However, he could make no impression on Norman who pulled his lead out to almost four seconds by Lap 14 of the 20-lap race. Instead, the significant battle became Sowery vs Megennis for third, which Megennis appeared to settle in his favor up the front straight as they started their 16th lap. Megennis’ momentum kept him charging onto the tail of Telitz and he outbraked him down the inside of Turn 5 on Lap 17.

However, Norman was well out of reach, and the Ohioan, who will next week test an Andretti Autosport IndyCar at Mid-Ohio, passed the checkered flag 4.7sec clear of his teammate Megennis. Telitz was a further 2.9sec behind but 1.4 clear of Sowery.

Askew eventually passed Malukas, while VeeKay fought his way up to seventh and set fastest lap. The pair were left tied at the top of the points race.

Race 2 was more straightforward, VeeKay again starting from pole and this time making no mistakes on his way to a 13sec win over fellow front-row starter Norman.

Telitz started third but was muscled back to fourth by Askew on the opening lap and when the Belardi driver tried to retaliate at Turn 5 he ran wide and fell to the back of the field.

Askew tried to outdrag Norman down to Turn 5 on Lap 4, but Norman held firm on the inside and kept second, leaving Askew to turn his attentions to another teammate, Megennis, right behind him. This pair dueled over third which allowed Sowery to close in, but Askew clung on and closed in on Norman again, to no avail.

Megennis, like Sowery slipped off the Norman/Askew pace as the race progressed, so that it was Malukas who was able to claim fourth.

VeeKay’s third win of the year leaves him just three points shy of Askew at the halfway point of the 18-race season.

Kyle Kirkwood was in superlative form for RP Motorsports in both races, even though he failed to start on the front row for either. In Race 1, polesitter Parker Thompson took the lead for Abel Motorsports as fellow front-row starter Sting Ray Robb’s Juncos Racing entry fell back, but electrical failure on Danial Frost’s Exclusive Autosport car brought out the safety car.

On the restart, Kirkwood jumped Thompson and hit the front long before the braking zone for Turn 1.

That left Thompson to deal with pressure from Ian Rodriguez, the Guatemalan in the second RP Motorsports entry, up from sixth on the grid, the pair running ahead of Moises de la Vara (DEForce Racing) who had climbed from 10th on the grid to head Robb and his teammate Rasmus Lindh. The Swede jumped Robb on Lap 3 and then de la Vara to then close in on the Thompson vs Rodriguez fight.

However, when de la Vara went off at Turn 1, the field closed up and on the restart Thompson lost out again, not only to Rodriguez but also Lindh, although Thompson reclaimed third on the final lap.

In Race 2, Lindh eased into the lead as Robb made another disappointing start and fell behind Kirkwood and Thompson, the latter of whom appeared to have nothing for the front pair. Frost ran fifth in Robb’s wheeltracks while coming under pressure from Rodriguez, but it was Robb who made the first move, climbing back into a podium position on Lap 5, but on Lap 6 Kirkwood dived down the inside of Lindh under braking into Turn 5 and claimed the lead.

Lindh remained close to Robb, and they exchanged fastest lap on 8 and 9, but their times were eclipsed by Thompson who was closing in on Robb. However Robb had to pit following an incident on Lap 10, allowing Thompson into third chased by Rodriguez and Lastochkin.

The fierce lead battle meant Kirkwood and Lindh pulled seven seconds on Thompson by the time the checkered flag waved, with Thompson having a similar margin over Rodriguez who in turn was 6sec ahead of Lastochkin.

His path to victory was made slightly easier following a Lap 1/Turn 1 coming together between Legacy Autosport’s Alex Baron and Cape Motorsports’ Darren Keane which left the latter off-track, and the former heading to pitlane for repairs.

Kaminsky maintained his lead for the opening two laps, but McElrea drafted past up the front straight at the start of Lap 3 and inched away thereafter to finish the 12-lap race 3.5sec clear.

However, first Sulaiman, then Shields and Eves would emote Rasmussen, before Sulaiman too, started losing ground. That allowed Shields into a third place he would never lose, despite Eves’ best efforts to apply the pressure.

Sulaiman held onto fifth ahead of Bruna Tomaselli in another Pabst car, while Rasmussen was eventually thumped off the track at Turn 12 by DEForce’s Jak Crawford who incurred a 30sec penalty as a consequence.

Eves was back in charge for Race 2, passing McElrea on the second lap and winning by 4.5sec ahead of Keane who prevailed in a long and tough battle with McElrea who also had to fight off Rasmussen and Kaminsky, until Rasmussen spun on Lap 9.

When Kaminsky ran wide at the Carousel, Keane slipped past into third and applied the pressure on McElrea, who had to give way at Turn 5 on Lap 11. The previous day’s winner held on to claim third, 2sec ahead of Kaminsky who in turn was 2.7sec clear of Rasmussen.

With Sulaiman and Baron getting penalties for blocking, Crawford came through to clinch sixth ahead of Edouardo Barrichello.

Toyota Racing Series to partner with Road To Indy