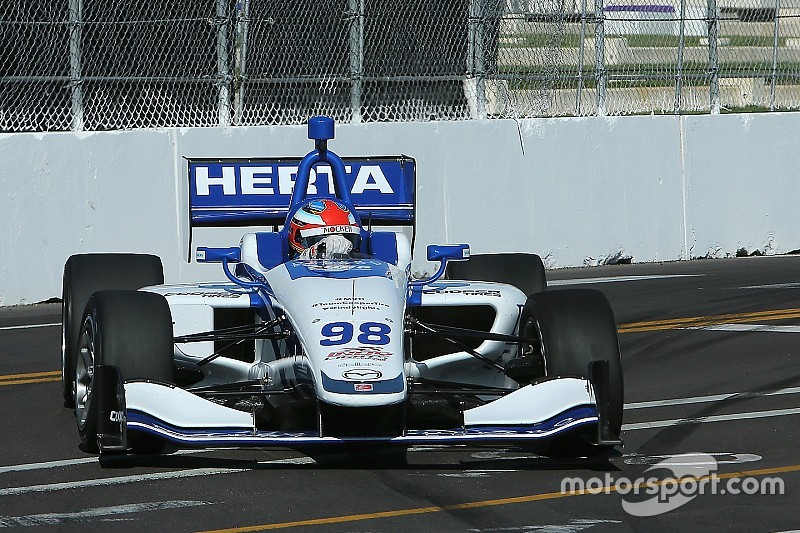 Series rookie Colton Herta made constant improvements in the final five minutes of Indy Lights qualifying to pull away from his rivals and put the Andretti Steinbrenner Racing entry on pole for the second race of the season.

With eight minutes to go last year’s Pro Mazda dominators Pato O’Ward in a (for now) one-off weekend with Team Pelfrey and Aaron Telitz at Belardi Auto Racing were leading the pack, separated by just one-thousandth of a second. Just a tenth down were Colton Herta of Andretti Steinbrenner and Santi Urrutia in the second Belardi entry.

Then Nico Jamin launched his Andretti Autosport entry to the top of the times, followed swiftly by Kyle Kaiser in the Juncos Racing entry. Then Herta laid down two brilliant laps, the second of which was 1min06.631 which put him 0.4sec ahead of Urrutia who also made late gains. The Uruguayan, who finished runner-up in last year’s Lights championship, pared the gap down to 0.1sec, but  Herta’s last lap shaved a further tenth from his best, ending the session on a 1min06.546sec.

Urrutia will line up second, ahead of Dalton Kellett who produced a fine late effort in another Andretti Autosport entry to jump to third, albeit 0.47sec off pole. O’Ward claimed fourth ahead of Kaiser, Jamin, and Neil Alberico in the top Carlin entry.