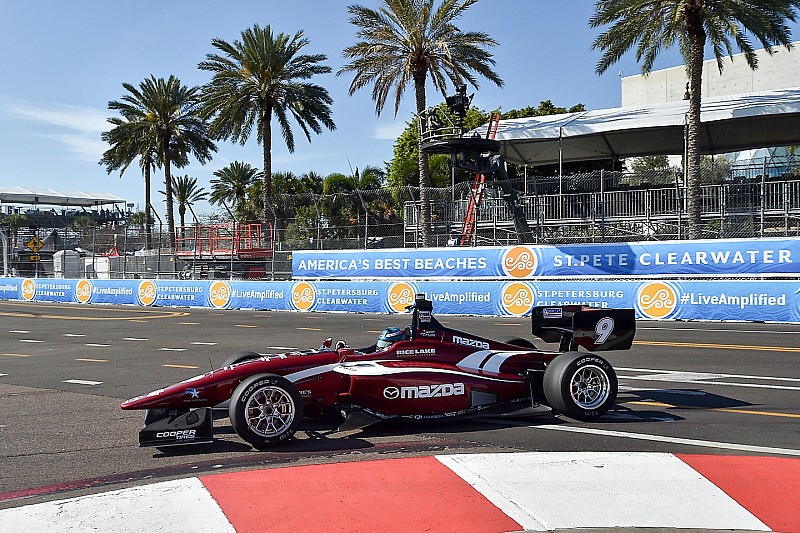 Series rookie Aaron Telitz dominated the opening round of Indy Lights on the streets of St Petersburg, steering clear of some first corner chaos and never looking back.

From pole position, Telitz (Belardi Auto Racing) led the field to the rolling start but didn't use his push-to-pass boost button, so they fanned out four-wide at the front approaching Turn 1.

Juan Piedrahita steamed down the inside, and took lead briefly, but was all locked up and sailed straight on as cars scattered across the track, and Dalton Kellett spun.

Telitz ignored the chaos to lead the Carlin cars of Matheus Leist (who started fourth) and Neil Alberico ­– up from seventh on the grid.

Leist then fell backwards, plummeting down the order and pitting at the end of lap eight with an engine problem.

Herta attacked Blackstock for third, swapping the position on lap 13 at Turn 1. He made the same move stick six laps later, aggressively lunging past with 16 laps to go.

Kaiser passed Blackstock at Turn 1 on lap 22, but Blackstock repassed him five laps later despite a brake issue.

Herta caught Alberico with nine laps to go, but a rash move at Turn 1 left him with a scuffed nosecone.

With five laps to go, Herta made the move properly at Turn 1 with the aid of push-to-pass on the frontstretch.

Piedrahita, who was on course for a top-six finish, was forced into the pits for a new front wing, which handed the place to Team Pelfrey teammate Pato O’Ward.

Telitz’s margin of victory at the finish was 11s ahead of Herta, Alberico and Blackstock. O’Ward grabbed fifth from a sliding Kaiser in with two laps to go, with Kaiser just holding off Nico Jamin, Zachary Claman de Melo and Nicolas Dapero.

Sixth-placed starter Santi Urrutia pitted with a broken tie rod after contact on his right-front corner. He rejoined and finished 13th, four laps down.