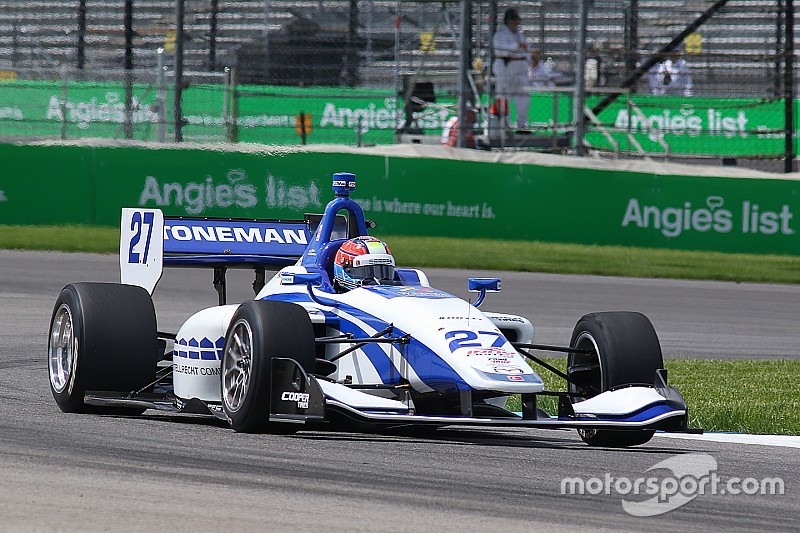 Dean Stoneman came from fifth on the grid to grab the lead on the third lap and score the first win of his Indy Lights career at Indianapolis Motor Speedway road course.

The Andretti Autosport driver withstood constant pressure in the 35-lap race, first from Felix Serralles of Carlin Racing, and then from Schmidt Peterson Motorsports’ Santiago Urrutia, but held on to win by 0.9sec.

That makes it six different winners in seven races for the Indy Lights series.

The race failed to start on the allotted lap, when Andre Negrao clouted the wall on the front straight while warming up his tires. Then at Turn 1, there was predictable chaos which polesitter Ed Jones (Carlin), Urrutia and Stoneman avoided.

But Stoneman passed Urrutia and was ideally poised to pounce when Jones (Carlin) drifted onto the grass at Turn 7 on Lap 3.

Stoneman then set about pulling out a 1.5sec lead by lap 6, at which point Urrutia started coming back at him, while third-placed Serralles recovered from a wild first lap and gained on the lead pair. By lap 10, Urrutia was up Stoneman’s gearbox from Turns 1 through 3, yet on most laps, Stoneman’s exit onto the two main straights was strong enough to stay clear of his pursuers.

In addition, Urrutia was now distracted by having to watch his mirrors for Serralles, who finally drove around the outside of the SPM driver at Turn 1, and immediately closed to within 0.8sec of Stoneman. However, the gap rarely shrank much below that and finally Serralles threw his car off the track on lap 29, and dropped to fifth behind recovering teammate Jones.

Urrutia took up the challenge against Stoneman and stayed hard at it all the way to the end, but was never quite close enough to penetrate the Andretti driver's defenses.

Following Serralles’ error, Juncos Racing’s Kyle Kaiser grabbed the final podium position after a very strong drive from 11th on the grid. Behind him the Carlin drivers came home fourth and fifth. Jones' recovery to fourth had been impressive, but the championship leader surely missed a chance to score his third win of the season and repeat his win from yesterday.

Sixth went to Felix Rosenqvist who started fourth but spun his Belardi Autosport machine on the opening lap, and then had to survive picking his way past the fierce three-way fight between Scott Anderson (SPM), Scott Hargrove (Team Pelfrey) and Zachary Claman De Melo (Juncos). Once into clean air Rosenqvist set fastest lap of the race and rued what might have been.

That squabbling trio’s battle was ended when De Melo attempted to take advantage of the two Scotts’ conflicts and cannoned into the pair of them, taking all three cars off track.