On paper, Tristan Vautier’s weekend could not have gone better. Last year’s Star Mazda champion captured pole, led every lap, and collected his second victory of the 2012 season in Friday’s Milwaukee 100. Based on the box score, it almost seemed too easy for him.

However, his win was not without its challenges. A pair of restarts, after Mike Larrison’s two spins, meant his lead disappeared twice, forcing him to fend off a hungry Sebastian Saavedra, who stalked Vautier the entire day. Plus, the aggressive manner in which Vautier restarted (he dove to the bottom of the race track to block any potential passing moves) did provide a degree of controversy, though no penalty was ever issued. 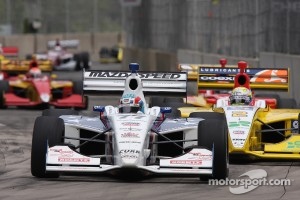 Further, in the waning laps, Vautier struggled to work his way through lapped traffic, allowing Saavedra to close the gap and mount one last push for the win; the two would in fact make slight contact with each other in the final laps. However, Vautier managed to fend him off and hang on for the victory.

"We put the car on the ground this morning and it felt amazing. After two runs we got it tuned, and we were great all day,” Vautier said afterward. “It was a great race, we were in control. The end was a little harder with the lapped traffic to manage, but awesome day, awesome job from the team.”

His victory moves the Frenchman three points ahead of teammate Esteban Guerrieri in the overall championship, with Saavedra now trailing by 14 markers.

Though they didn’t gather quite as much attention as the first two finishers, Esteban Guerrieri and David Ostella put together arguably the finest drives of the race. Both started somewhat deeper in the field (sixth and seventh respectively) and both struggled at times to find the right setup, with Ostella even brushing the wall early on.

However, during the closing laps, they treated us to one of the most entertaining shows of the weekend, carving their way up to third and fourth as the leaders worked through traffic. While neither was able to capture victory, salvaging good results on an otherwise trying day will prove just as good.

Still, Guerrieri couldn’t help but think there was more to be had. “It was a tough one today,” said last year’s championship runner-up. “We were struggling in the beginning to find the rear grip. Then we just worked to find our pace. We had a bit of understeer but it wasn't quite working. We never found the balance. We came into the race with a setup that we knew and tried to make it so I wouldn't push so much in the beginning and save the tires a little bit. To come in third makes a bad day not so bad. We have to keep fighting for the championship. I'm pleased, not completely happy, but pleased."

For Ostella, fourth place marks his best finish since St. Petersburg last year, when he when he debuted in Firestone Indy Lights. “I had to focus on taking care of the tires the whole race,” he explained. “I made a mistake and brushed the wall a bit early on which allowed Alon Day to pass me. The last 20 laps I was flying out there. It is so good to finish a race after coming off of two races where I didn't finish. Being in the top five is amazing and I can't take the team enough. They did a wicked job. I've been sick all day and fallen asleep between every session. The team worked so hard today though to give me a good car. It was an amazing race.”

The Firestone Indy Lights Series now has a quick turnaround ahead of this weekend’s Sukup 100 at Iowa Speedway, which rolls off Friday at 7:30 p.m. EST.