INDIANAPOLIS - Andretti Autosport's Zach Veach remained in the hunt in the Firestone Freedom 100 until about five laps to go when he fell out of the draft and lost hope of victory at the world's most famous racecourse on Coors Lights Carb Day. Veach advanced two spots to finish fifth as the checkered flag flew on his first start on the 2.5-mile Indianapolis Motor Speedway oval. 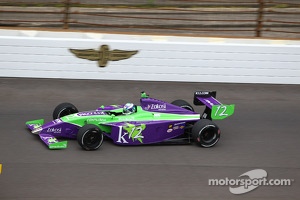 "I had a beautiful view of the finish; I just wish I was a little closer to it," said Veach. "The first 20 laps, the car was really good. I had enough tools in the car to adjust it and take it where I needed. The last 20 laps, I was out of adjustment on everything I had on the car.

From that point on, I was just hanging onto a loose race car at Indy. I stayed in the draft through the last 15 laps, but with five to go, I started falling back. I couldn't do anything to bring the K12 car back to life. At that point, it was either push harder and crash the car or take home what we had. It was a good run for us. We'll get them back on the short ovals."

The weekend at the Indianapolis Motor Speedway began with plenty of fanfare for young Veach, given he was fastest in opening practice earlier this month and the only driver hitting 190 mph on the speed charts.

The teen athlete also had a special book signing at Indy Reads Books, where he talked about his first book, 99 Things Teens Wish They Knew Before Turning 16. He also sat down with legendary television and radio host, Larry King, to talk about his career on the racetrack and his work for others in his community. His attention then turned back to driving.

Practice would then resume on Thurs., May 23 where Veach turned just 27 laps, good enough on the speed charts for seventh. Persistent rain ended the practice session after around an hour and the Brickyard showed the checkered on the only practice session for the aspiring IZOD IndyCar Series drivers.

Teams then turned focus on qualifications, which were originally set for 1:15 p.m. The session would finally get underway at 4:15 p.m., three hours after it was originally scheduled for due to continual rain showers.

Out fifth to attempt to qualify, Veach would have a two-lap attempt with times ranked in order based on the quickest cumulative time. Veach's average speed was 187.013 mph, which would put him seventh on the chart for the start of the Firestone Freedom 100.

After his frustrating qualifying run on Thurs., Veach looked to the race to make up ground. Just two laps into the race he was into fifth but complaining that his car was a bit too free. With six laps in the books, he put a move on Gabby Chaves, who qualified fourth, for the fourth position.

He then went side-by-side with eventual winner Peter Dempsey, who was making his third start in the Freedom 100 race, to put Veach in third. The two battled for much of the race with Dempsey eventually taking his fourth spot back, displacing Veach back to fifth with about 20 laps to go.

The top-five remained nose-to-tail until about ten laps to go and were separated by just .7285 of a second. While continuing to set up Dempsey for the fourth spot, Veach began to fall back and lost the draft as the top four began to fade with five laps left in the 40 lap race.

On the final lap, Sage Karam, Chaves, Munoz, and Dempsey went four-wide as the checkered flag flew with Veach crossing close behind to secure a top-five finish at the Brickyard in the marquee race of the Firestone Indy Lights series.

Veach, of Stockdale, OH., will spend Sunday's "Greatest Spectacle in Racing" cheering on his Andretti Autosport Firestone Indy Lights teammate Munoz in the 97th running of the Indianapolis 500. Following the race weekend, Veach will finalize his high school education with K12 and graduate on Sat., June 8.

He'll then return to the racetrack for round five of the 2013 Firestone Indy Lights season, which will be at The Milwaukee Mile in West Allis, WI on June 15 at 2 p.m. EDT and shown nationally on NBC Sports Network. Practice begins on Thurs., June 13 with qualifications set for Fri., June 14.