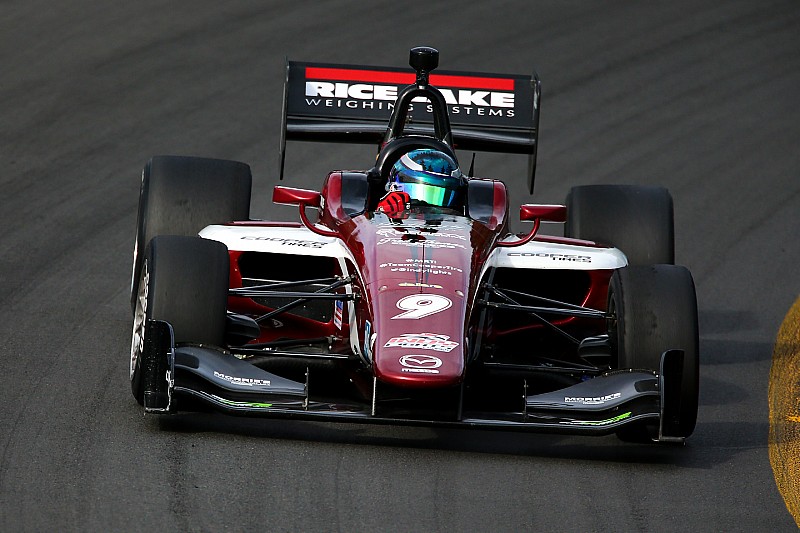 Kyle Kaiser and Juncos Racing simply needed to start the race to secure the 2017 Indy Lights championship, doing so from 10th on the grid, but it was Belardi's Aaron Telitz and Santi Urrutia who stole the show at a wet Watkins Glen.

Polesitter Colton Herta of Andretti Steinbrenner Racing and Urrutia led the field to the green flag in an extremely wet start, but that didn't discourage Aaron Telitz from going three-wide for the race lead out of the first corner. He was able to move up to second, but promptly snatched the top spot from Herta under braking into Turn 1 the following lap.

Telitz controlled the race from that point onward until a full-course caution just past the halfway put the field back behind the safety car. Dalton Kellett lost control of his Andretti Autosport car at the exit of the Bus Stop, impacting the barriers on the opposite side of the track, while Belardi's third car, that of Shelby Blackstock, ground to a halt under the full-course caution.

After 17 of 25 laps, the red-flag was displayed due to heavier rain coming down creating major puddles. After a short delay, the race resumed with seven laps to go. Urrutia had a go at Telitz at the entrance of the Esses, but was forced to back out in order to avoid a collision with his Belardi teammate. He stalked Telitz for the remainder of the race, but was unable to mount a sustainable charge.

For Telitz, it was his second victory of the season, the first having come at the season-opener at St. Petersburg.

Kaiser crossed the line seventh, sealing the crown in his third year in the series by 20 points over Lights sophomore Urrutia, while Herta remained third and top rookie.