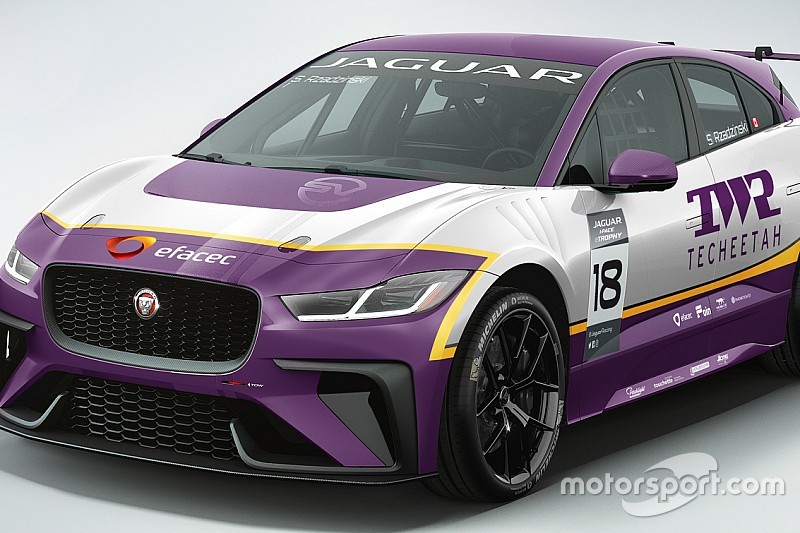 The TWR Techeetah team is to run a Jaguar XJR-9-inspired retro livery on its Jaguar I-PACE eTrophy entry in Mexico this weekend.

Techeetah enters one car for driver Stefan Rzadzinski in the one-make Jaguar SUV championship – which resumes at this weekend’s Mexico City E-Prix – alongside its DS-backed efforts in ABB FIA Formula E.

The team revived the Tom Walkinshaw Racing moniker ahead of the eTrophy’s first round in Saudi Arabia last year, and has now added the purple, white and gold livery of the Jaguar XJR-9 to its I-PACE.

“We’re incredibly proud of our collaboration with TWR and this livery is synonymous with their engineering excellence and success across motorsport categories,” said TWR Techeetah team principal Keith Smout. “Together, we’re pushing to continue this history of winning into the all-electric era, as we push to become the inaugural champions of the Jaguar I-PACE eTrophy.

“We know that there is a real affinity for retro liveries amongst fans, can’t wait to see the response that our cars get at this weekend’s race.”

TWR built and ran the legendary XJR-9 sportscar, which won the Le Mans 24 Hours in the hands of Jan Lammers, Johnny Dumfries and Andy Wallace on its outing at the race in 1988.

The car also clinched that year’s drivers’ and teams’ titles in the World Sportscar Championship, and won the 1989 Daytona 24 Hours.

Duran will take over the entry that was driven by Alice Powell at the season-opener and is reserved for one-off appearances.

“I’m excited to get behind the wheel of the Jaguar I-PACE eTrophy car in front of the passionate Mexican fans,” said Duran. “The series got off to a great start in Saudi Arabia and I’m looking forward to driving this electric racecar for the first time.

“Alice Powell did a great job at the first race so I’m hoping to put in a strong performance. It is great to see Jaguar at the forefront of electric vehicle technology and I can’t wait for Saturday’s race.”