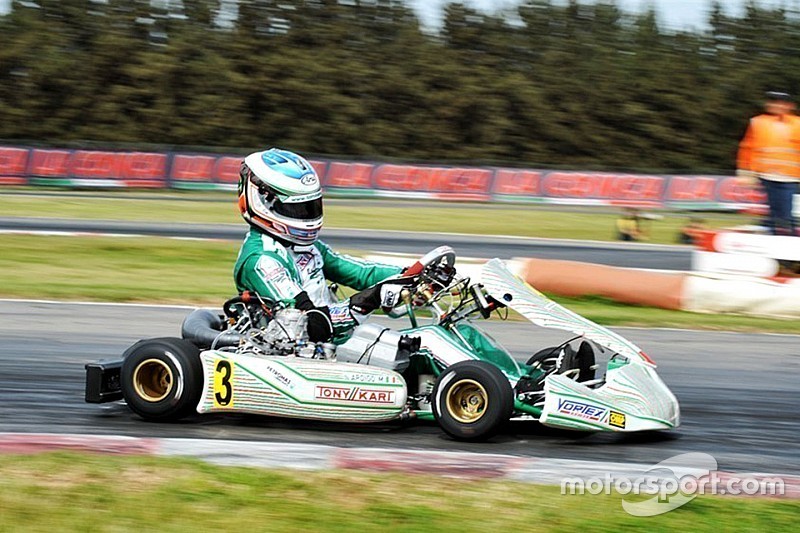 The Italian, who won rounds 2 and 3 of the WSK Super Masters, emerged victorious after a race-long battle with local driver Jeremy Iglesias.

Ardigo converted his pole position into a Turn 1 lead but was almost immediately under pressure from the Sodi kart of Iglesias.

Although the Frenchman first lost some ground after an overly ambitious overtaking attempt, he quickly recovered and claimed the lead with a clean move.

However, Ardigo stayed close and was eventually back in first.

Slowly pulling away, Ardigo secured the win with Iglesias dropping behind Flavio Camponeschi.

The reigning European champion made two overtakes in the early stages and spent the majority of the race shadowing the leading duo.

He started to pressurize Iglesias during the final couple of laps and forced his way through on Lap 23 of 25.

2013 Junior World Champion Luca Corberi kicked off his CIK-FIA KZ2 European championship campaign with a victory, claiming the lead on Lap 2 and spending the rest of the race on top.

Although polesitter Stan Pex had a good getaway, he found himself behind Corberi on Lap 2.

While the Italian quickly built a lead of four seconds, Pex lost another spot to Fabian Federer.

Never losing his advantage out front, Tony Kart factory driver Corberi cruised to the finish to claim the win with Federer first holding off the counterattacks of Pex and then the charges of Paolo Besancenez.

The latter ran fourth in the early parts of the race but was turned around by Leonardo Lorandi and dropped to eighth.

But he recovered and went on to claim the final spot on the podium, with Lorandi also passing Pex, the Dutchman settling for fifth.

Callum Bradshaw, second in Saturday's qualifying and winner of the pre-final, took a flag-to-flag victory in the final race of the CIK-FIA Academy Trophy season opener.

The Briton, who took 14th in the series last year, didn't have a lead bigger than a second over Mads Hansen for most of the race.

Still, the Briton did not put a foot wrong and was even unfazed by drops of rain hitting the track during the final laps as he crossed the line in first.

Dane Hansen and Frenchman Thomas Mialane, who had topped qualifying, completed the podium.

Oliver Clarke, eighth on the grid, fought his way through to fourth but had to keep a train of seven karts at bay to secure the position.

US Open karting championship wraps up after thrilling Sunday