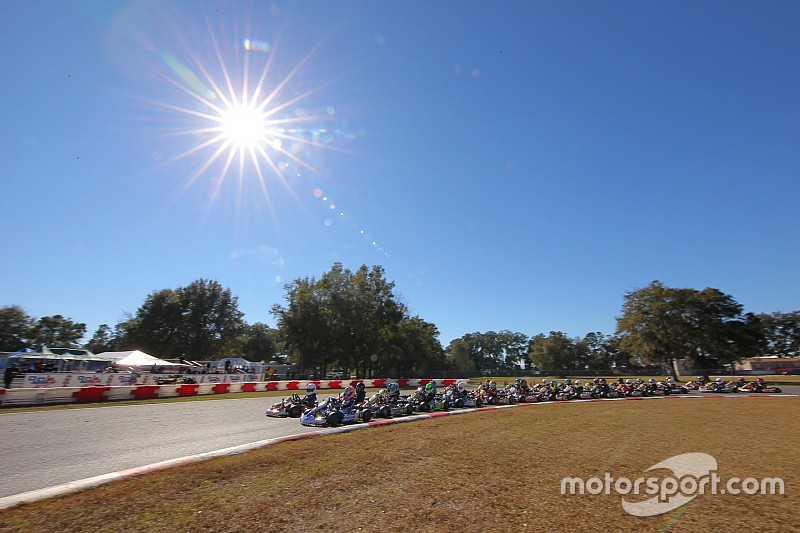 After an action-filled day of racing action at the Ocala Gran Prix circuit, big winners included Kyle Kirkwood in ROK Senior, Danny Formal in ROK Shifter, Matheus Morgatto in ROK Mini and Mathias Ramirez in ROK Junior. All four simply drove away from their rivals to position themselves right back in their respective championship hunts.

Formal used a perfect launch from the standing start in ROK Shifter to gain the lead from Oliver Askew and after Askew surrendered second place to Austin Garrison, the front three remained in position for all 30 laps with none making enough of a mistake for the others to attempt a pass.

Kirkwood delivered as expected, taking a 10-second victory over Alain Sisdeli and Ryan Norberg. However Sisdeli earned himself a two-position driving infraction penalty, moving Norberg up a step on the podium and Luis Forteza onto it.

In Junior, Ramirez used much of the same style as Kirkwood, jumping out front at the start and building up an early big lead. The mêlée over second saw Ryan MacDermid erupt with a sizeable gap and Michael d'Orlando battling Tyler Gonzalez for third.

Fast-forward to Lap 15 and d'Orlando caught MacDermid and some defensive driving allowed Gonzalez into the mix as well. After exchanging P2 for five laps, it all came to a sudden end when Gonzalez passed on the inside of d'Orlando in the final corner and MacDermid pushed him through, running side-by-side with d'Orlando. Then Jett Noland stuck his nose inside the both of them, launching over MacDermid and into d'Orlando, sending him into the outside wall and ending MacDermid's race.

At the checkered, Ramirez had the win, second went to his OGP teammate Gonzalez and third to Gabriel Paturle who slid through all the action to stand on the podium.

It took a few starts to get the ROK Mini Final underway but once the green flag waved, Matheus Morgatto overtook polesitter Tyler Maxson on Lap 2 and never looked back. Maxson, Jak Crawford, round one winner Derek Carmenate, and Reece Gold all made their attempts to take second position throughout the race but ultimately it was a great charge through the lead pack by Jason Wellege that earned him the runner-up place with Gold coming home third. After a strong weekend up front, Maxson fell to ninth in the Final.

However, this afternoon it was the Micro ROK category that stole the show with the youngest competitors on track displaying a spectacular race for the ages.

Round one winner Oliver Denny sat on pole-position following a strong week in Ocala and he led the way as the green flag dropped. However on lap three, Denny surrendered the lead for the first time on the weekend to Connor Zilisch and the battle began. Zilish, Denny, Nicholas Terlecki, Anderson Leonard and Jeremy Fletcher traded positions often until Denny attempted to pass for the lead on the outside of Turn 1 and instead fell well back from the leaders and into fifth, with Terlecki retiring on the same lap from third.

With Zilisch leading the way, Denny began to work his way back forward and he brought his BENIK Kart teammate Freddie Slater with him. Picking off Brent Crews first, they both moved by Fletcher and Leonard five laps later. Denny now had his sights on Zilisch and with five to go he hit the front, and while Zilisch tried everything in the final laps, it wasn't enough to prevent Denny securing his second FWT victory in as many starts.

Slater completed the podium with a miraculous Sunday of driving after starting the day in 28th on the grid of the PreFinal.

Finally, in the two Masters categories this weekend, Anthony Honeywell completed the perfect effort in ROK Masters with a win on Sunday over Adam Petitt and Andre Duek, while Scott Davidson held off Michel LeGrand for the victory in ROK Shifter Masters with Farshad Bagheri taking third.

Activity at Ocala resumes this coming weekend with the second round of the Florida Winter Tour Rotax Max Challenge while ROK Cup competitors will close out their Tour in three weeks time at Palm Beach Karting in West Palm Beach.