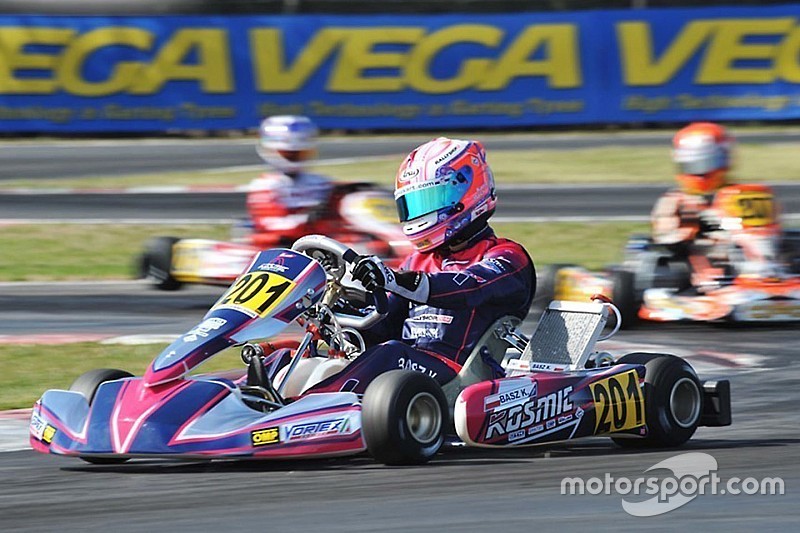 Kosmic Racing's Karol Basz took a flag-to-flag win in the final WSK Super Masters round of the season at Adria, which saw Lorenzo Travisanutto crowned champion.

The 16-year-old Italian, winner of the second of four rounds, was only fifth in the standings before the round but a consistent performance at Adria - Travisanutto placing fourth in the pre-final and third in the final - allowed him to steal the title.

Both of the aforementioned races were won by Basz, with OK-class rookie Marta Garcia taking a shock second in the final.

Starting third, the Spaniard quickly overtook front row starter Tom Joyner, who dropped to the lower ranks of the top 10 before retiring.

One second behind Basz, Garcia slowly made up ground in the first half of the race, halving the gap.

However, Basz responded with a couple of stronger laps, bringing the difference back to a second.

Travisanutto gained third after passing the struggling Joyner and then cruised to the finish as fellow Ward Racing teammate Alexander Smolyar completed the top four.

Starting second alongside teammate Ulysse de Pauw, Collet was shuffled down the order, having lined up on the outside lane.

He quickly recovered and was second already by the end of Lap 3, putting pressure on leader Dennis Hauger.

Although the former 60 Mini star soon surrendered to Collet, the latter failed the shake both him and Taoufik off.

The trio spent the entire race separated by just half a second but, with Hauger and Taoufik seemingly not willing to risk their first podium and title respectively, they finished in an unchanged order.

Noah Watt, winner of the CIK-FIA European Championship opener a week ago, passed Fin Kenneally for fourth, the Briton himself ending up fifth.

Marco Ardigo took a third consecutive win in the fourth WSK Super Masters round and became the dominant champion of the KZ class.

Starting from pole, he held off early pressure from five-time world champion Davide Fore and started to pull away from mid-way point onward.

He eventually crossed the line by 1.4s with Fore and Jeremy Iglesias making it to the podium.

Fifth on the grid, the latter overtook Jorge Pescador and Flavio Camponeschi for the position, Camponeschi eventually settling for eighth.

The top five was completed by Bas Lammers, who finished just ahead of Sodikart teammate and championship runner-up Anthony Abbasse.

He dropped 14th as a result, which was just enough to end up with one point less than Lorandi.

Despite temporarily dropping to third from second on the grid, Paparo passed both title rival Francesco Pizzi and Spaniard Jose Gomez to lead the final three laps.

He crossed the line half a second ahead of Gomez as the duo managed to slightly pull away due to battles behind them.

Stanek took fourth as Pizzi had to settle for fifth and second in the standings.