6 Hours of Silverstone next stop for Le Mans Series

The fourth round of the 2011 Le Mans Series will take place on the Silverstone circuit in England. The Autosport 6 Hours of Silverstone on 10th‐11th September will be the thirty‐fifth running of the famous British endurance classic. The teams racing in the Le Mans Series will begin the final push to the wire on this track on which some of the greatest drivers and cars have triumphed – there will be an exhibition of cars that have raced on the Northampton layout. In all five categories the winners could take a decisive step towards bagging this year’s titles. Fifty cars will start the second‐last race of the 2011 Le Mans Series season.

LM P1: Audi and Peugeot duel – next round!

Over two months after the Imola 6 Hours, prototypes and GTEs resume battle in the Le Mans Series. While the summer break gave the teams some breathing space, it did not prevent them from fine‐tuning their cars for the last two races of the season, preparing for 2012 and adapting to a new rule. The thickness of the plank under the flat bottom has been increased from 20 to 25 mm for the LM P cars, a measure to ensure greater aerodynamic stability that will be checked throughout the weekend. Also the size of the louvers above the wheels has been be increased to achieve the same aim. 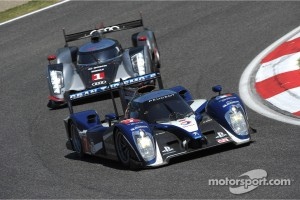 For the third time this season the on‐going Audi/Peugeot duel will be the focal point of interest in the top endurance category, LM P1. After Imola the two manufacturers will be at it hammer and tongs and will also prepare for 2012. The French firm, victorious at Spa and in Italy, will try to continue the 908s’ winning streak. Scot Allan McNish and Englishman Anthony Davidson will be out to shine in front of their public.

The Pescarolo and Rebellion Racing squads, which are on level pegging in the LM P1 teams’ classification in the Le Mans Series, will be out to make the break in this race before the final round on the Portuguese circuit of Estoril. Quifel‐ASM has thrown in the towel. However, one of its drivers, Olivier Pla, will be back in the cockpit as he has joined the OAK Racing squad, which will welcome back Matthieu Lahaye recovered from his big shunt in the Spa 1000 km. Aston Martin Racing will also make its comeback at Silverstone, not with the troublesome AMR‐ONE, but with the Lola‐Aston Martin that helped the team to the Le Mans Series title in 2009.

Several teams are still in with a chance of winning the LM P2 title. British outfit, Greaves Motorsport, victorious at Le Castellet and Imola, is in a strong position at the head of the classification. Drivers Tom Kimber‐Smith and Karim Ojjeh, backed up by Olivier Lombard at Silverstone, will also try to consolidate their first place in the drivers’ ratings. Strakka Racing, second in the teams’ classification, has been steady since the start of the season but has yet to score a victory. The English squad is counting on its homogenous driver line‐up to get back to the top. Other victory contenders in this hotly‐disputed category are: Signatech‐Nissan, Boutsen, Energy Racing, TDS Racing and Pecom racing. 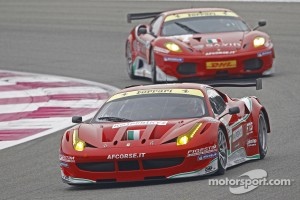 In the LM GTE Pro category, a no‐holds‐barred battle looks on the cards between the Porsche 997s, Ferrari F458 Italias, BMW M3s, Lotus Evoras and Aston Martin Vantage. Before the Autosport 6 Hours of Silverstone, Italian team AF Corse has opened up a comfortable lead in the Le Mans Series classification, but will have to drop its worst result at the end of the season. Giancarlo Fisichella and Gianmaria Bruni, who have been racing at the front since the start of the year, will be determined to continue their run of successes (one victory, two second places).

LM GTE Am: Another win for Armindo and Narac?

Nicolas Armindo and Raymond Narac arrive at Silverstone leading the category. The Imsa Matmut pair won at Spa and Imola, but must keep a sharp eye on the Ferrari trio of Marco Cioci, Piergiuseppe Perazzini and Stéphane Lemeret who have been very consistent so far this season (two second places and one third). Larbre Competition, the Felbermayr‐Proton team and CRS Racing are all waiting to pounce on any errors by the front‐runners.

Pegasus Racing with two victories and a second place is firmly installed in the lead in the FLM category. Its drivers Julien Schell, Patrick Simon and Mirco Schultis can win the drivers’ title in the Autosport 6 Hours of Silverstone. Opposition to the French squad will come from Neil Garner Motorsport and Genoa Racing which, in partnership with the Storholm Racing squad, is backing The London Project to Cure Blindness (more information on www.lemansseries.com).

The supporting events on the weekend’s programme are for the Formula 3 Euroseries, the Speed Series and Classic Racing.

Audi ready to fight at 6 Hours of Silverstone