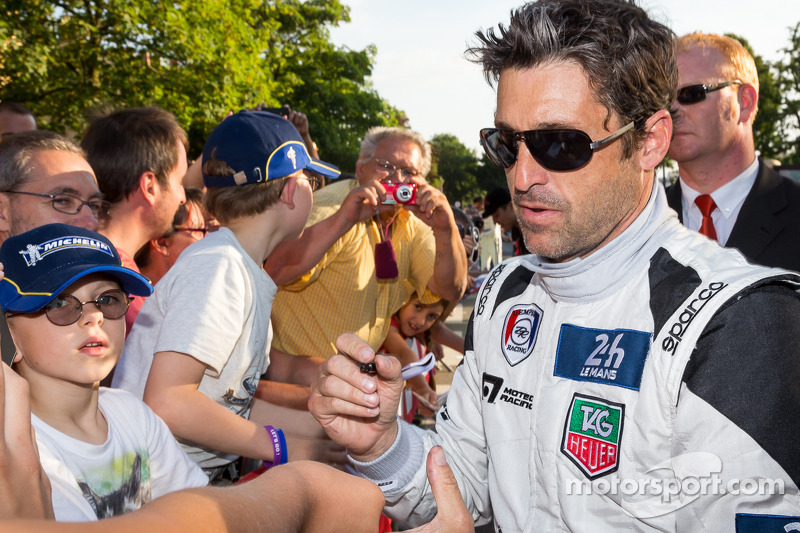 Dempsey Racing-Proton drivers Patrick Dempsey (in photo), Joe Foster and Patrick Long finished fifth in this weekend’s 24 Hours of Le Mans, June 14 – 15, where they joined class runner-ups and their teammates, Proton Competition, in giving Porsche its top results in the GTE-AM division.

Although the #TeamAmerica trio came up just short in improving on last year’s fourth-place GTE-AM showing in the No. 77 Dempsey Racing-Proton Porsche 911 RSR, Dempsey and Foster have now finished in the top-10 in each of their three Le Mans starts. The duo debuted at Circuit de la Sarthe in 2009 and were the anchor drivers in a ninth-place GT2 finish. Long, America’s only factory Porsche driver, has Le Mans class victories in 2004 and 2007.

The No. 77 rounded out the top five but Proton’s No. 88 Porsche 911 RSR, of Christian Ried, Klaus Bachler and Khaled Al Qubaisi, moved into second at the race’s halfway point and stayed there until the end.

In addition to the top finishes, Dempsey Racing and Proton also combined for Porsche’s top GTE-AM qualifying efforts last week at Le Mans. Long qualified and started the No. 77 in seventh, one spot behind Bachler in the No. 88.

“It was good result for us, certainly not what we wanted, we came here to win, but to join Proton in giving Porsche its best results, really for the entire event, you have to be pleased,” Dempsey said. “Christian runs a great team, Klaus was our teammate at Daytona and Sebring this year and it was a pleasure meeting and teaming with Khaled. Great result for them, really for us too, but we are just not going to be completely happy until we win at Le Mans.”

Like last year’s race, the No. 77 led the GTE-AM class, endured wet weather and suffered a punctured tire while also dealing with some new Le Mans challenges.

Starting driver Long led a good portion of the race’s opening hours when infrequent but persistent showers seemed to work well for him and the No. 77 Porsche. Relying on some great strategy calls from the team, Long raced to the front of not only the GTE-AM field but also showed the way to all of the professional drivers in the GTE-PRO division for the last part of his race-opening stint. He pitted for the final time three hours and 40 minutes into his shift, handing the Porsche over to Dempsey in the lead.

“It was great to lead early on, not only in GTE-AM, but all the GTE cars, and that really came down to a wise strategy to let the weather play out and not dive into the pits for tire choices,” Long said. “It was touch and go there for a while, with a lot of incidents under the safety car period, but it was still the right call and a great job by our strategy guys on pit wall.”

Dempsey drove a total of three trouble-free double stints in the race, running as high as second in his opening shift and turning his fastest laps of the weekend in his final run mid-day Sunday, right when he and the team needed it the most. Foster then moved the No. 77 into the top five in his final turn at the wheel Sunday afternoon with his best laps of the weekend.

Dempsey Racing-Proton also made quick work of a brake change four hours from the finish that gave Foster and Long the on-track chance to make up the time. The team also recovered from a marathon three-minute stop-and-hold penalty for what was deemed an excessive burnout leaving the pits after a stop.

“It’s always hard here, it’s Le Mans, but this race seemed tougher than last year, a different challenge,” Foster said. “Last year we were fighting for the podium and the win, and this year it took all of our efforts to overcome the hurdles and challenge for the top five. We had our problems with the puncture and penalty but our setup seemed to favor the early wet conditions and the grippier track at the end. That was what we needed for the finish, it was a challenge for most of the race, but Patrick Long was able to defend our spot and build enough time for a splash that got us to the end. We wanted more but the team was great as usual, our Porsche was fantastic, and both Patricks did an incredible job. We are already looking forward to next year!”

Closing-driver Long fought hard to defend the top-five in the final run to the finish, even overcoming the late splash-and-go pit stop for fuel just minutes from the end.

“It was a hard-fought fifth-place, for sure,” Long said. “The car was flawless, we had no on-track incidents, some hiccups in the pits, but all in all the execution of the race and everybody’s efforts were a big improvement from last year. Pace wise, we were strong at the end of the race when the grip level of the track came up. Early on, when the track was quite green, we really struggled for front-end grip and, certainly, we were not nearly as strong on the straights as we were last year. That has a lot of factors, from aero setup to balance of performance and the like, but I don’t think that our one-lap pace was a factor in our finishing position.”

“It’s not easy being in his shoes,” Long said. “It would be like being thrown into Hollywood with just a few years of experience acting, but he really does a great job. He has way more pressure here from the media and the fans than any of us combined, but he has been working hard in the off season. He works as hard as any driver I know and it showed. Certainly a podium was our hope, and to come up short a second-year in a row is pretty tough to accept, so there’s still unfinished business. Looking to the future, it would be great to come back and attack and reach our ultimate goal as a team.”

Next up for Dempsey Racing is a return to the IMSA TUDOR United SportsCar Championship at the Sahlen’s Six Hours of The Glen at Watkins Glen International, June 27 – 29. The six-hour endurance race can be seen live on FOX Sports 1 at 11 a.m. EDT, Sunday, June 29.

Le Mans can make a manufacturer's reputation -- or break it