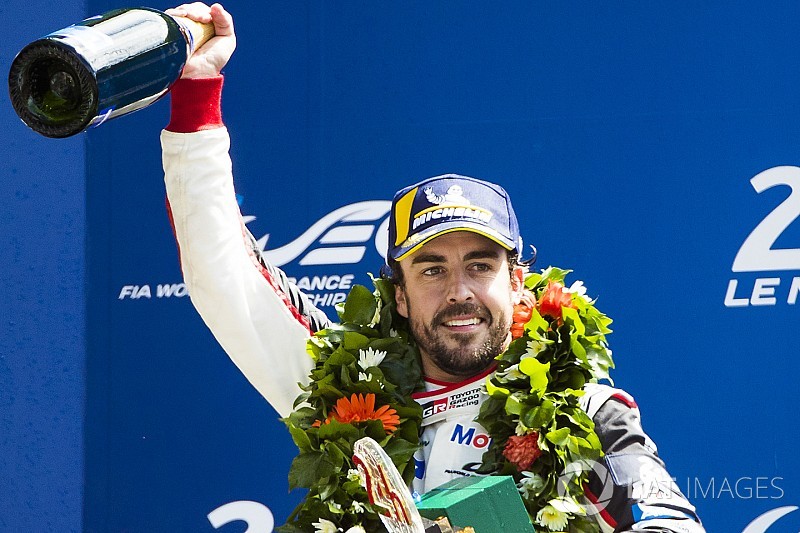 Fernando Alonso says he was ‘stressed’ in the final stint of the Le Mans 24 Hours, fearing he would miss out on glory like he did in the 2017 Indianapolis 500.

The McLaren Formula 1 driver completed the second leg of his 'triple crown' attempt with victory on his Le Mans debut with Toyota, which combined with his two Monaco Grand Prix victories leave him with the only outstanding element of the Indy 500.

His teammate Kazuki Nakajima ran the final stint of the race, with Alonso watching on having played a key part in the #8 car's recovery from time lost due to slow zones and a subsequent penalty while speeding through one with Sebastien Buemi driving.

Alonso said he found the experience of being unable to impact Nakajima's final stint "stressful".

“It’s an amazing feeling [to win]," said Alonso. "Right now I’m maybe still in a little bit [of] shock because we were so focused on the race and so stressed at the end watching the television.

"I’m not used to watching my car racing, I’m normally in it. It was quite a tense 24 hours, with two cars within one minute [for] more or less the whole race.

"I didn’t know if watching television was better, or sleeping or [the] MotoGP [that] was on at that time. Maybe MotoGP was the best idea."

Alonso raced in the 2017 Indy 500, with Andretti through a partnership with McLaren, but retired with 21 laps to go when his Honda engine blew up after consistently running in the lead pack from which Takuma Sato pounced to win.

He said that he feared losing victory at Le Mans as he felt he had at Indianapolis.

"IndyCar [the Indy 500] is definitely one of the legs of the triple crown and I attempted last year with that intention," he said.

Alonso believes that because team performance is so crucial in determining a driver's results in F1, it is more satisfactory for him to beat specialists in other disciplines.

"It’s definitely [a] very attractive target to try the triple crown and see if you can be a better driver and a more complete driver," he said.

"So, to be a better driver and more complete, you need to win in every series against the specialists in that series.

"To beat the specialist in oval racing or here [with] endurance guys who know every little trick here and you know, to be able to come here and be at that level is a very attractive target."