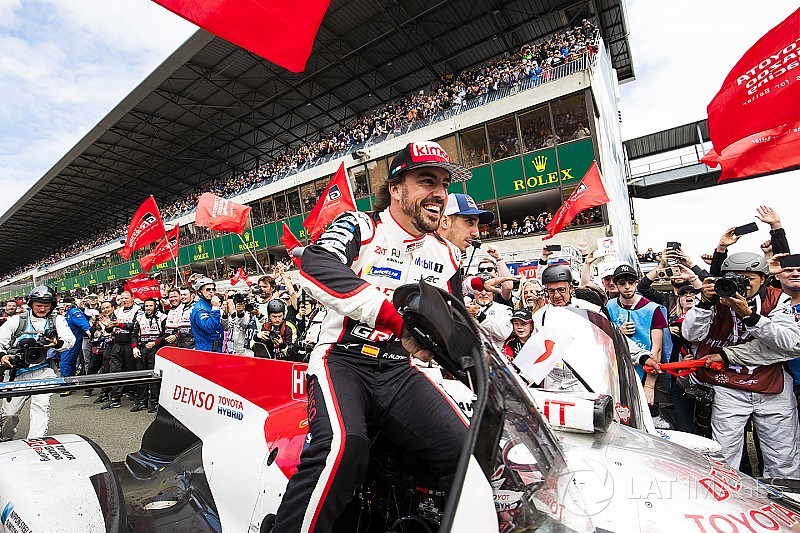 Fernando Alonso claims his Le Mans 24 Hours victory with Toyota was at a "higher level" than any other win at the endurance classic.

Although the Spaniard's Toyota team faced no serious manufacturer competition, with nearest LMP1 rivals Rebellion Racing finishing 12 laps down, Alonso is adamant that his success was not devalued at all.

"We had the only hybrid system with I think has 49 percent less efficiency than any other car and it was a great challenge.

"I put this victory on a higher level than any other victory at Le Mans."

Alonso’s efficiency comments were referring to the LMP1 class’s Equivalence of Technology rules that are designed to balance the playing field between the Toyotas and their non-hybrid rivals.

The non-hybrids were allocated significantly more energy over a lap of the Le Mans circuit, 205MJ versus Toyota’s 124.9MJ, to make up for the disadvantages of not running a hybrid system.

Despite dominating practice, qualifying and the race, Alonso said that the nature of Le Mans meant that success still required a supreme effort to overcome the unique challenges.

"At Le Mans it was different because the race is so hard and so demanding," he explained.

"The whole team has to work together to execute the race. We saw in other categories like LMP2 and GT, even the favourite ones, even at the end of the race it is not so clear, not predictable.

"The team of our boss Zak Brown [United Autosports] was third at the end of race [in the LMP2 class] and in qualifying he was 14th. That is how hard Le Mans is and how unpredictable it is.

"In F1 we are missing that, we are all sitting here and we all know that we can fight for maybe seventh in qualifying and seventh in the race, and that is the biggest problem for F1."