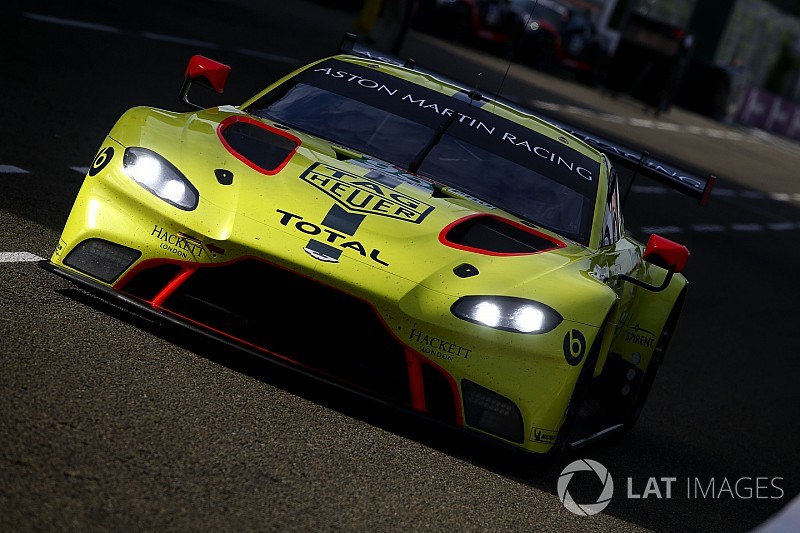 Aston Martin is working to build a new Vantage GTE for the Le Mans 24 Hours after Marco Sorensen's monster shunt during Sunday's official test day for the event.

The Aston Martin Racing team is aiming to have a brand new car ready for its scrutineering slot next Monday after the #95 second-generation GTE Pro class Vantage was heavily damaged in the accident.

AMR managing director John Gaw told Motorsport.com: "We have the test car we could use or we can build up a new one around a spare chassis, and that's what we've decided to do.

"It's preferable to have a fresh car for the race and we also want to keep the test car as a test car."

Gaw explained that it wouldn't be able to ascertain if the crashed chassis was a write-off until it arrives back in the UK.

All four corners were removed in the crash, which happened at the first of the flat-out kinks between the Mulsanne and Indianapolis corners towards the end of the morning session of the test day.

Sorensen, who shares the car with Nicki Thiim and Darren Turner, was able to exit the car unaided before being given a clean bill of health at the circuit medical centre.

The shunt was triggered when the Aston Martin came together with the SMP Racing Dallara-Gibson P217 driven by Harrison Newey, son of Formula 1 design legend Adrian.

It is understood that there was no footage of the incident, which happened when they were overtaking a GTE Am class Porsche, on the circuit's security cameras.

Race officials have penalised the two drivers for an "unsafe manoeuvre during overtaking" under the FIA International Sporting Code.

Both have been given suspended one-minute stop-go penalties for the race, which will not be applied unless there is a repeat infringement.

The second AMR GTE Pro entry continued running for the rest of the day and ended up more than five seconds off the pace.