In order to clinch a third-straight victory, Benoît Tréluyer, André Lotterer and Marcel Fässler will be relying on several key factors.

This weekend sees Benoît Tréluyer set out to clinch a third consecutive victory at the Circuit de la Sarthe. In order to achieve this feat he’ll be counting on the combined talents of Audi Sport, team-mates André Lotterer and Marcel Fässler, and the guidance of Le Mans 24 Hours legend Henri Pescarolo.

Starting this Wednesday Benoît, André and Marcel take to the stage in the first act of retaining their Le Mans crown. Unbeaten there since 2011, they enter this year’s edition as favourites despite being the first to recognise the size of the challenge that awaits them, be it from within their own Audi squad or rivals Toyota.

In order to clinch a third-straight victory they will be relying on several key factors: their updated R18 e-tron quattro which has been further developed since last year’s race, the Audi Sport team and its expertise at Le Mans, their personal driver bond, vital assistance from lady luck, and finally – in the Frenchman’s case at least – lessons learnt from Henri Pescarolo.

“To win at La Sarthe you’re relying on the car, but it is also important that the driver has received the correct education,” says Benoît. “And to drive these type of cars ‘Pescarolo coaching’ is the best in the world! Henri is the reference: he taught me all of the basics and offered me the opportunity to race at Le Mans. 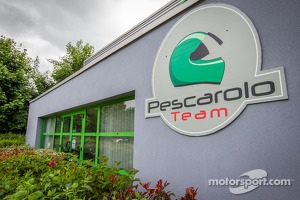 The foundations of my success at the 24 Hours come from him. The way in which I manage my endurance races comes from what Henri taught me and I stick to it. His advice allowed me to grow and mature. Today, I hope that he regards my victories as a bit like his own. He is a great man for whom I have a lot of respect.”

That esteem is reciprocated and only continues to grow year after year. As such, next weekend the quadruple Le Mans winner (1972-74 and ‘84) and appearance record-holder (33 as a driver and 11 as team owner) will be keen to chart the progress and performance of his ex protégé.

“When I ended my driving career I decided to put all my energy into supporting drivers on the Elf Scholarship. Benoît was one of the good drivers we selected and then trained. He continued in single-seaters and achieved great things, but the doors to F1 never opened for him. It’s a shame but endurance racing benefited by gaining a first-class person.

Benoît is a brilliant driver, very serious and whom I always had great trust in. As I always say, in order to win at Le Mans you have to be as quick as an F1 driver when required, intelligent and capable of adapting your driving style according to the evolution of your car, its tyres and how the race is unfolding.

And you also need to be settled in your own mind and put others before your needs in the interests of the car and your team. Benoît has all of these qualities.”

When both men either meet privately or, in this instance, during a special occasion in June at the offices of l’Equipe newspaper, conversation inevitably gravitates towards Le Mans.

“The car to win, an efficient team to manage everything and team-mates capable of helping your bid: Benoît has all of these elements at Audi Sport. On top of this, drivers from western France have always done whatever they can to perform well at this race, which for them remains a major regional event in spite of its worldwide notoriety,” concludes Henri.

Meanwhile the Alençon-born apprentice, who is again looking forward to meeting his numerous local fans, knows just what his master is talking about: it’s for both Audi and his supporters that he will be aiming to clinch a third win at La Sarthe this year. And should that happen, it would help take him a step closer to emulating his mentor.

Dome and Pescarolo Team very satisfied with the Dome S102.5