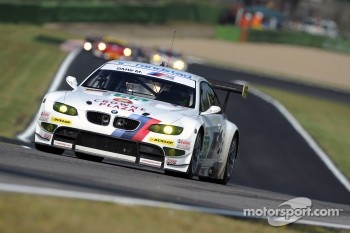 Over majority of the race the BMW drivers were in full control. With sunshine and temperatures over 30 degrees Celsius, starting stint drivers Müller and Werner successfully defended first and second, which BMW Team Schnitzer had achieved in qualifying, in the opening stages of the endurance race. However, then bad luck struck in various ways. Car number 56 was knocked back by a problem with the air conditioning. This device is responsible for keeping the cockpit temperature below 32 degrees Celsius, as stipulated in the regulations. Initially the BMW M3 GT dropped back from second to fourth before the malfunctioning air conditioning had to be repaired, resulting in a loss of almost half an hour. Better than eighth was impossible for Werner and Lamy to achieve.

The no. 55 car led the pack for most of the race, but also suffered a dose of bad luck. As early as the opening stage the radio had stopped working. Just when the crew was busy repairing the sister car, Müller had to pit on lap 159. Due to a collision with a prototype, the valve of the right front tyre was damaged. As Müller couldn’t let the team know that he was heading into the pits, the mechanics didn’t have time to make the necessary preparations stipulated in the regulations for the stop. Therefore, the Race Director decided to give the car a one-minute stop-and-go penalty. Müller lost the lead and ultimately took the chequered flag in third.

Charly Lamm (Team Manager): “There are two positive facts that we should take back home from Imola: The performance of our two BMW M3 GT cars was excellent. In addition, I want to pay a compliment to Dunlop. We had very strong tyres in what was the first real hot race of the season. The no. 55 BMW M3 GT was in the lead for long parts of the race. However, we had lost the radio connection and couldn’t communicate with the drivers. Jörg Müller came into the pits at short notice following an incident with a prototype and was unable to give us an advance warning. The team was working on the damaged air conditioning of car number 56. So the fire extinguisher wasn’t in the right place when Jörg came in. This was the reason for the penalty which threw us back to third. The other car battled it out on the front for a long while, before the problem with the air conditioning occurred.”

Augusto Farfus (car number 55): “We proved again in this race that we can really push with the BMW M3 GT. Unfortunately this wasn’t enough today to secure victory. I think this is what you call a chain reaction. Nevertheless, we should focus on the positives. The car is great, and with temperatures as high as today, the Dunlop tyres perform even better.”

The performance of our two BMW M3 GT cars was excellent.

Jörg Müller (car number 55): “We had the chance to win this race. But that’s racing. Many small things added up to a big problem, so we had to make do with third. As the radio wasn’t working, I couldn’t let the crew know that I needed to come into the pits. This then indirectly caused the penalty. Apart from that, the BMW M3 GT was fantastic today, and the tyres worked perfectly. Bearing this in mind, today’s result is a big disappointment.”

Dirk Werner (car number 56): “It’s always disappointing if you are running in such a good position and then drop back due to a problem. The team tried everything to fix it, but repairing the air conditioning in a race car is a complicated and time-consuming affair. That’s why we are leaving Imola empty-handed.”

Pedro Lamy (car number 56): “This result doesn’t relate to the performance of the car. The air conditioning problem had hampered our progress even before the long repair stop. The team changed the passenger door, in order to improve the cooling in the car. But in the end the long repair was not avoidable.”