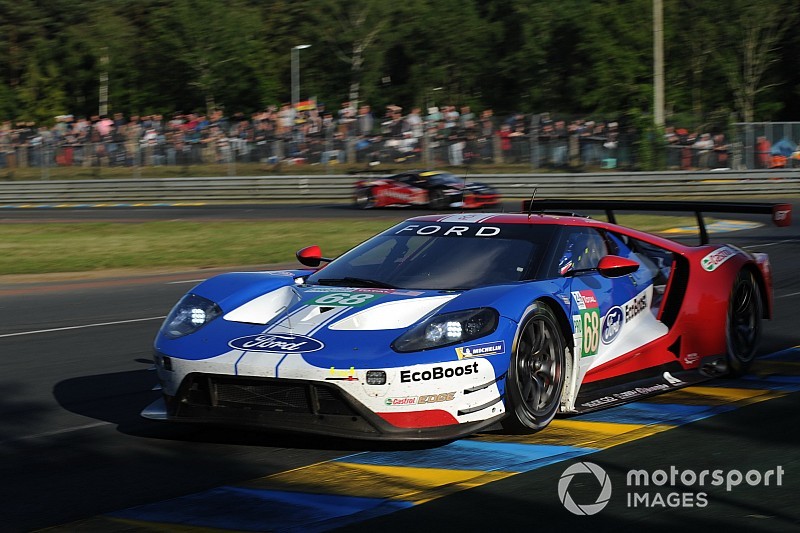 The #68 Ford GT has been deleted from the results in the American marque’s fourth and final Le Mans 24 Hours due to an apparent breach of fuel tank capacity regulations.

However a report from the FIA and ACO Technical Delegates following post-race scrutineering said that the “total on-board fuel volume [was] found to be in excess of the permitted limit".

The maximum permitted volume per the Endurance Committee Decision for the car was 97 liters, and scrutineering revealed the #68 Ford’s tank to hold 97.83 liters.

According to the ACO/WEC release: “The competitor explained that the team checks the Maximum Onboard Fuel Volume at their facility in the US using the same measurement technique as the Scrutineers.

"Since the car was shipped, the BoP [Balance of Performance] has changed, and the competitor made the changes to their tank, but given the resources on site, they were not able to do a calibrated check.”

Thus the stewards “therefore order the usual penalty for a technical breach of this nature and disqualify the competitor from the event. The Stewards order the forfeiture of any prizes and trophies and that the final classification be amended and the order of the other cars behind the competitor shall be adjusted up.” The team does have a right of appeal.

Le Mans was the Ford GT's swansong in the GTE Pro category of the FIA World Endurance Championship, at least in factory team guise.

Ford won the class on its return to La Sarthe in 2016, on the 50th anniversary of the Ford GT40's first triumph.

Gavin "battling to understand" how Fassler to blame for crash